We met a Tatar Warrior on V. Putvinskio Street

On May 26th, the picturesque V. Putvinskio street in Kaunas will celebrate its second annual block party. We visited one of the active participants, a local gallery owner, and fond out a lot more than expected! 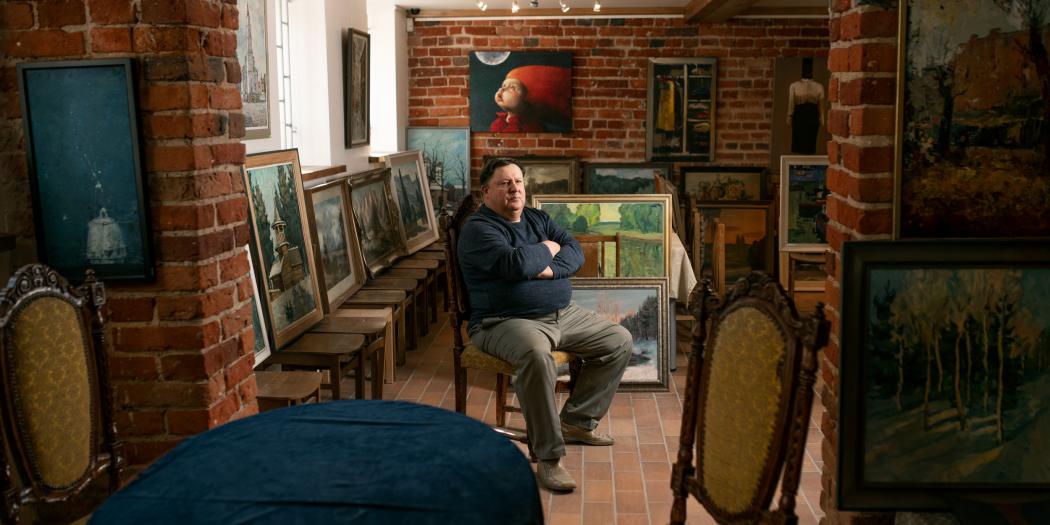 Kęstutis Zenonas Šafranavičius lives in Aukštieji Šančiai, and for four days of the week, you can visit him on V. Putvinskio street. House no. 42 was a consulate of Argentina during the years of the first republic of Lithuania, later it was a trading office of the Soviet Union, where a Polish military attaché worked as well.

The huge balcony even had people giving speeches for military parades, Mr Šafranavičius told us when opening the doors to his antique shop-gallery GK Galerija, inviting to one of the spaces packed full of paintings. You can look around for those, also books, photos, records and other objects on Tuesdays through Fridays. As for Saturdays, come here on May 26th – this will be the day of Putvinskio street, initiated by the Kaunas Artists House. So even the residents of the street that take a break on weekends will be here in full-on action.

What made you consider becoming a collector, owner of an antique shop?

Collecting things is an outlook on life – everyone does it, most of us just don’t admit it, or we pay no attention to it. But three different cups to drink tea from is already a collection!

It’s a specific way of living that requires a lot of information and knowledge, certain patience to discover things and then find the places for them. I started collecting almost right from my birth – I was always into it. My mom and dad weren’t collectors, but maybe my ancestors were? History, geography and other related disciplines were fascinating to me in school, and that’s all linked to collecting! For instance, postal stamps – during the Soviet years, apart from special collectors’ clubs, Kaunas had only a single shop (on the current S. Daukanto street) where you could buy stamps from such countries as Cuba or Nicaragua. Of course, there was a chance these were printed in Lithuania.

The knowledge that collectors hold is varied – I know people who look for information about Kaunas and then publish such books. One of the most known Kaunasians, professor Liudas Mažylis, is also a collector. If he wasn’t one, I’m sure he wouldn’t have found the Act of Independence of Lithuania. It was a hunch of a collector that led him to it, not the thinking of an academic historian. There are thousands of exciting subjects, and this kind of curiosity is the engine to move forward.

I’m an engineer-builder by profession, but that has little to do with what I’m into. Perhaps that experience helps a bit, but today my business is collecting. And it’s not a successful one at times. The middle class of Lithuania has shrunk, and there aren’t many collectors left. Still, people come by the shop and buy some things. Foreigners love the old vinyl records by the Melodija company. I’m glad they can discover something here. 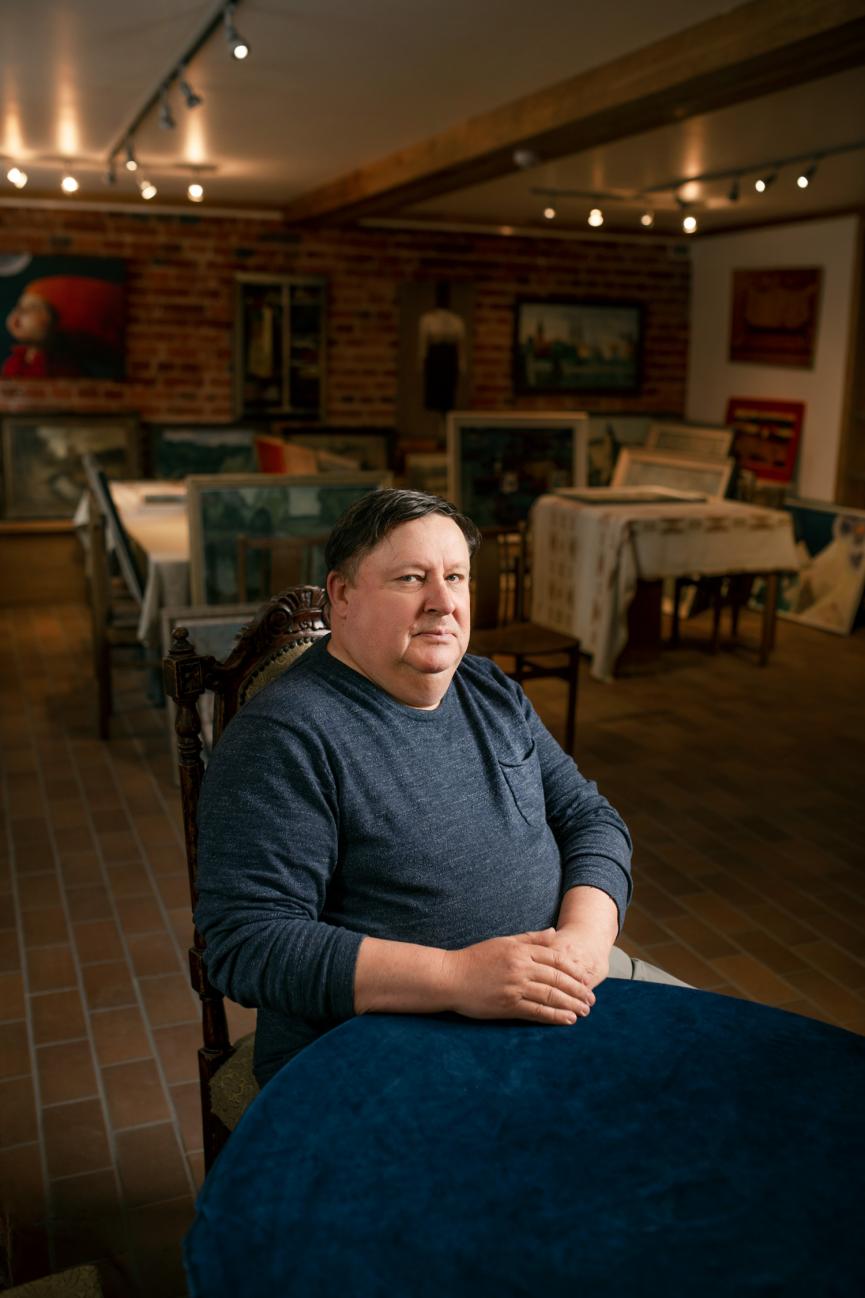 When did you settle in this building?

Six years ago. The house was in bad shape when we bought it – this was a warehouse for the post office during the Soviet occupation, and before that, people lived here. We worked hard at turning it into a safe place, making it look more like a gallery. This hall can host exhibitions of up to 30 artworks – artists do tend to address us about it.

It’s been three years since we started collaborating with ceramicist Kristina Alšauskienė, who gives ceramics classes here. I’m happy to see three- or five-year-old kids moulding objects, appreciating them, bringing some home. This livens our gallery up a lot. And if kids feel at home here, then this space must have good energy!

How do you feel in V. Putvinskio street? Why this place?

When we were looking for a building that could host us, we explored many locations of the city centre. I loved this one instantly, and the house has a serious history. I’m a fan of history, after all!

The museums nearby bring balance to the street. For example, Vytautas the Great War Museum is a destination of military objects, while our place is all about art. Also, it’s a good street strategically for me since I have many errands to run in the city, and it’s the spot where Tatars from the Kaunas region meet – I’m the head of the community.

Are you a Tatar?

I see myself as a Lithuanian with Tatarian roots, even though most of my blood is from Tatars. Ipolitas Makulavičius, the head of the Tatar community of Alytus, is my cousin. My mom was born in Alytus. Tatars have been living in Lithuania for more than 600 years.

Is the community in Kaunas large?

When I was elected as the head of it ten years ago, we counted the members, finding about 150 residents of Tatarian origin, but there are apparently many more of them here. The assimilation processes were strong; people would forget their roots. As I have always been into digging deeper, I frequently suspect people being of Tatarian origin because of their last names – I want to invite them to join our community!

Sometimes it’s enough to talk to anyone about their grandmas, grandpas, villages, and they get amazed by a few facts. The genetic code of the Iranian peoples has left its trace in many locations of Lithuania, and I’m not just talking about Tatars, other nations of Central Asia are in the mix too. By the way, Lithuania was always a place that armies would cross, or they would fight here – armies including people from very different nations.

Our family, we think, came from Crimea. Last names and family signs (tamgas, which later were included in Tatarian coats of arms) have led us to believe that. Our coat of arms is perhaps from the 17th or 18th century; it has a tamga with a heart pierced by an arrow.

During those community meetings, do you focus on everyday issues or do you champion any rituals as well?

We engage in cultural activities only. We don’t have the main religion – there are Muslims among us, Catholics, Lutherans, but that’s no obstacle to communicate. The songs and dances are basically extinct. I do remember some small bits from my childhood, but nothing more. Together with the community, we were trying to teach kids a few Tatarian songs: we bought national costumes for them, and the head of our ensemble was a graduate of the J. Gruodis conservatory – her father came here from Ufa, so he and his children spoke the Kazan dialect.

Tatarian language was gone in this country by the 17th century. People from the current Kazakhstan steppes, Crimea and the Volga region came to Lithuania, but they could barely understand one another, and all of them were seen as Tatars. Many fled from the country (Grand Duchy of Lithuania) in the 17th century since those opposing Islam often attacked them. They settled near the Black Sea, in present Romania. Around 30,000 Tatars are now living next to the Constanța city, and they speak the same language that Tatarian people spoke in the Grand Duchy of Lithuania! We found out about this pretty recently. Maybe we could learn the language from them.

I could go on and on. Some things about the past that we know today should be preserved. I believe that’s important. We’ve established a virtual museum, and the first part of the material is already up there. The Department of National Minorities gave us a bit of funding, so perhaps we’ll be able to continue this, let’s say, eternal project.

What else do you work on with the community?

We’re organising a chess tournament for the 12th year in a row, as there are many chess players among Tatars. The chess federation of Kaunas was founded by a late member of our community, former head of the association of Lithuania’s Tatar communities, KTU associate professor Romualdas Makaveckas. The fast chess tournament is named after him – it will take place on September 15th, at the Kaunas Garrison Officers' Club Building. The tournament is an international one and has a solid rating, with the best players of Lithuania taking part. I’m an amateur myself, but that doesn’t get in the way of organising the event.

We also have a Tatarian club for military history, named after general Juzefas Beliakas, who was a partner of this club. My family had at least three generals since warfare was one of the most popular fields amongst Tatars – it’s only me that’s an engineer-builder! I have collected loads of iconographic material, objects, so one of the spaces at the gallery is dedicated to the history of war.

So now let’s talk about the thing I came here to talk about – what did you offer visitors last year during the day of the Putvinskio street? An open door?

Kind of. I visited a few neighbours and looked around – I liked some activities and some not that much. There weren’t many people like me who brought their objects outside and talked to the passers-by. The street had many activities, but most of them weren’t commercial. I’d like to have more events on this day, and not only on this street! It’s a significant celebration; however, some streets might not have such rich stories… We’ll take part this year too, so I’ll have to convince our ceramicist Kristina who couldn’t make it last year.

I have many photos of this very building from different periods – there’s now a salon for curtains here, so maybe they’ll join us as well. Last year our neighbour, ceramicist Gediminas Šibonis organised a tour in his flat, and a large number of people came to visit him, just like they visited us. Overall, my goal is to bring people here.

Visit Kęstutis in his gallery on V. Putvinskio st. 42. It’s open 11 am - 3 pm Tuesday to Friday.
GK Galerija on Facebook