Kaunas is not only a river city but also a fountain city with lots of splashing objects created by artists and sculptors. It is estimated that there are about 20 of them! 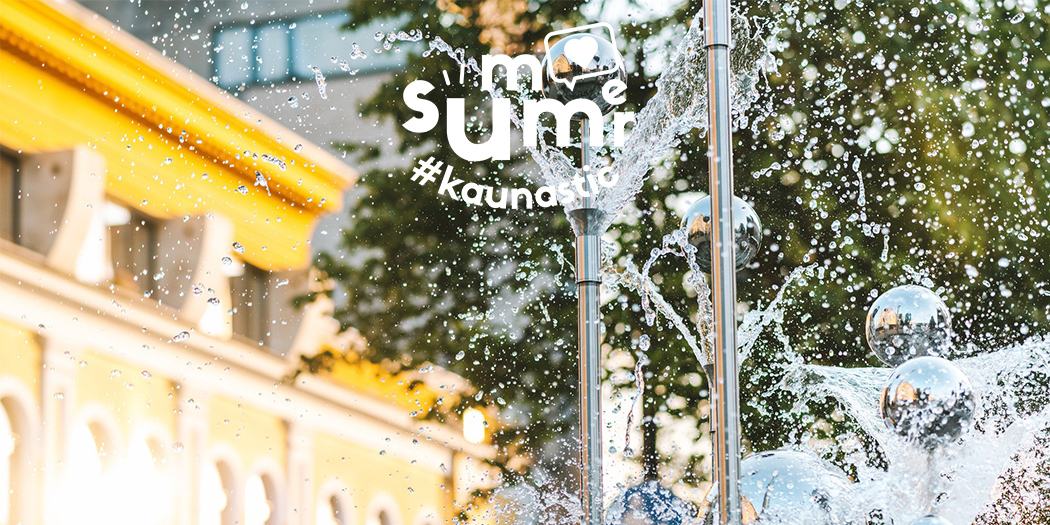 Kaunas is not only a river city but also a fountain city with lots of splashing objects created by artists and sculptors. It is estimated that there are about 20 of them! From ornate works standing for decades to modern wonders of art and engineering found in a frequent corner of Kaunas. It’s pretty kaunastic to walk around the still little-known city streets and hear the pleasing sound of splashing water, right?

One of the main highlights of Kaunas is a legendary fountain in Laisvės Alėja, which was reborn just a few months ago. The water source installed 40 years ago, when the street was converted to a pedestrian boulevard, still fascinates passers-by and, according to the builders, is currently one of the most modern fountains in Lithuania, with a cooling “fog” effect and controlled remotely. We guarantee that by visiting here, you will not only be able to cool down but also dance because the fountain has a music sound system! 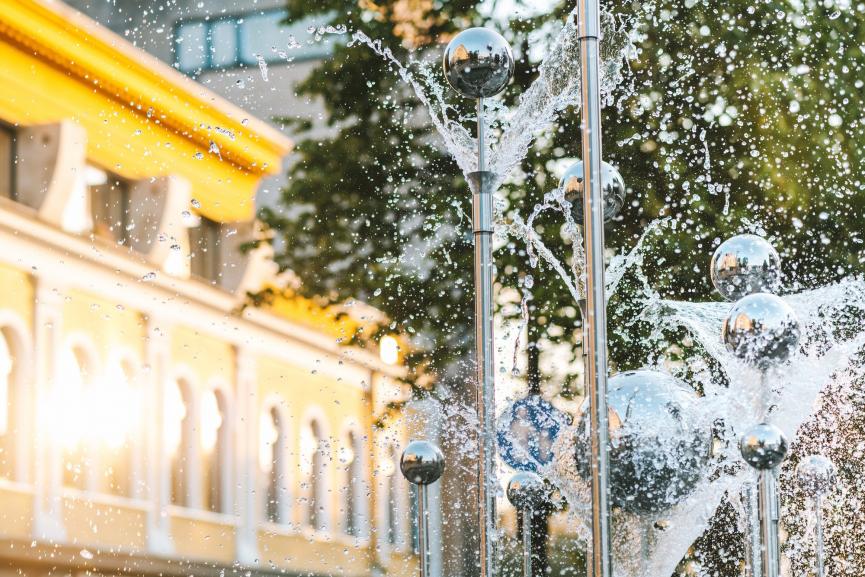 Every single day, Kaunas residents are delighted not only by the completed reconstruction of Vienybės Square but also by the splashes of the newly installed dancing fountain there! Both morning and evening, smiling people of all ages gather in this space, greeted by the multicoloured fountain performances that catch the eyes of every passer-by. 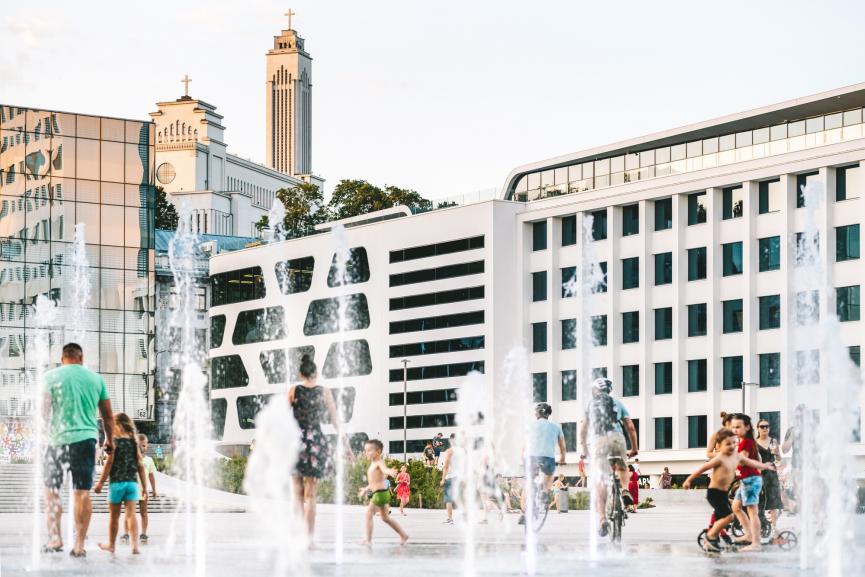 Vienybės Square. Photo by A. Aleksandravičius

As spring blossomed, the fountain of the reborn Kaukas Stairs was painted in all the colours of the rainbow. In 1936, the construction of the Kaukas Stairs was slightly reconstructed in the post-war years – a fountain was installed from two rainwater collection basins. Now, it is yet again a new project. So, if you want to wander a bit away from the hustle and bustle of the city, and admire the joys of the fountain, but still want to be close to the city centre – we recommend the Kaukas Staircase Fountain. There’s a lovely cafe right next to it, in case you want to stay longer. 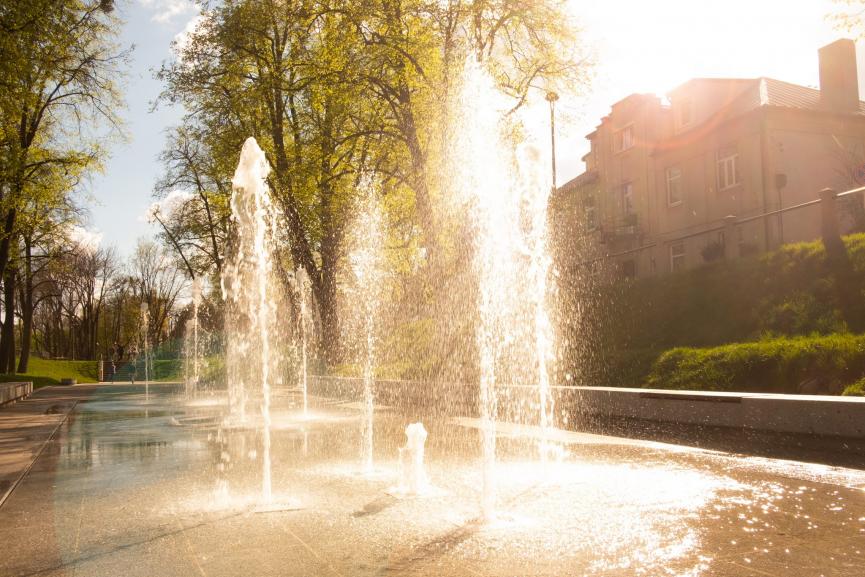 After getting acquainted with the wonders of Kaukas staircase architecture and enjoying the multicoloured fountain, go up the stairs – a sculpture by Bronius Pundzius “Water Carrier”, which was built in 1939, together with the engineering miracle that turned Kaunas to a modern city, waiting for you, and another small fountain with clear water. Don’t forget to take a bottle with you and replenish your supplies with quality spring water. 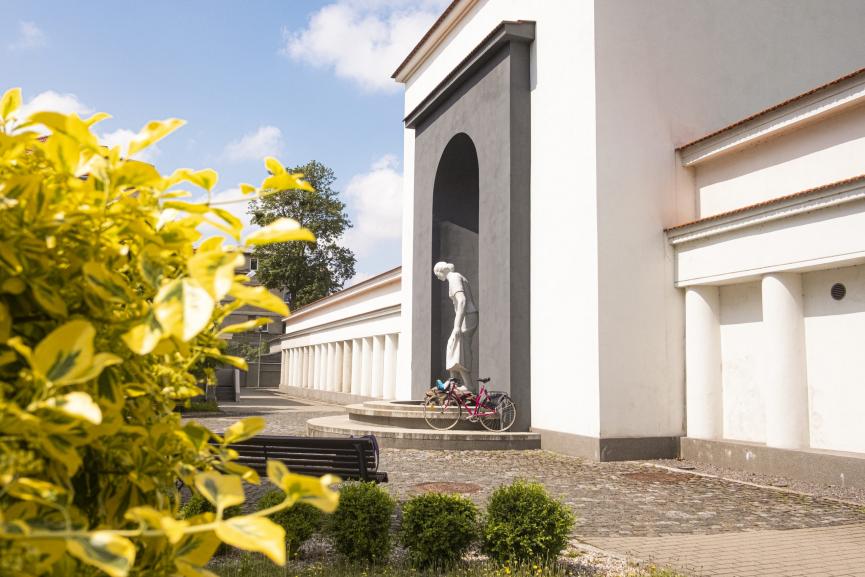 The gnome sculpture inside the fountain is said to be older than the museum itself, which is, oh well, almost a hundred years old! It’s particularly pleasant to sit here and hear the carillon bells – the concerts are held every Sunday 4 pm and on public holidays. 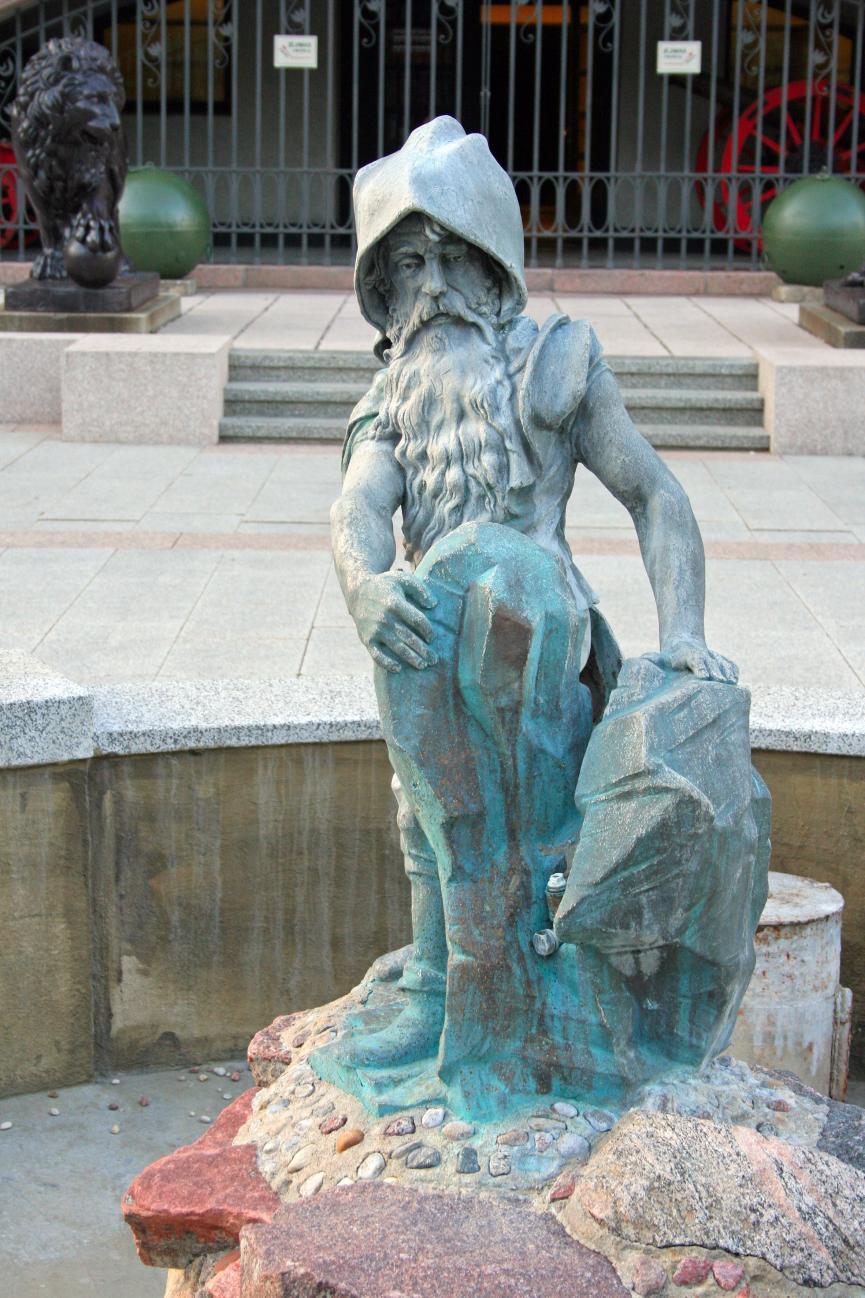 The fountain of the Town Hall Square, created by the sculptor and painter Jūratis Zalensas in 1988, located in the heart of Kaunas city, stood without life a few years ago. Today it is a popular meeting spot; passers-by enjoy splashing splashes and drinking spring water – taste it yourself! 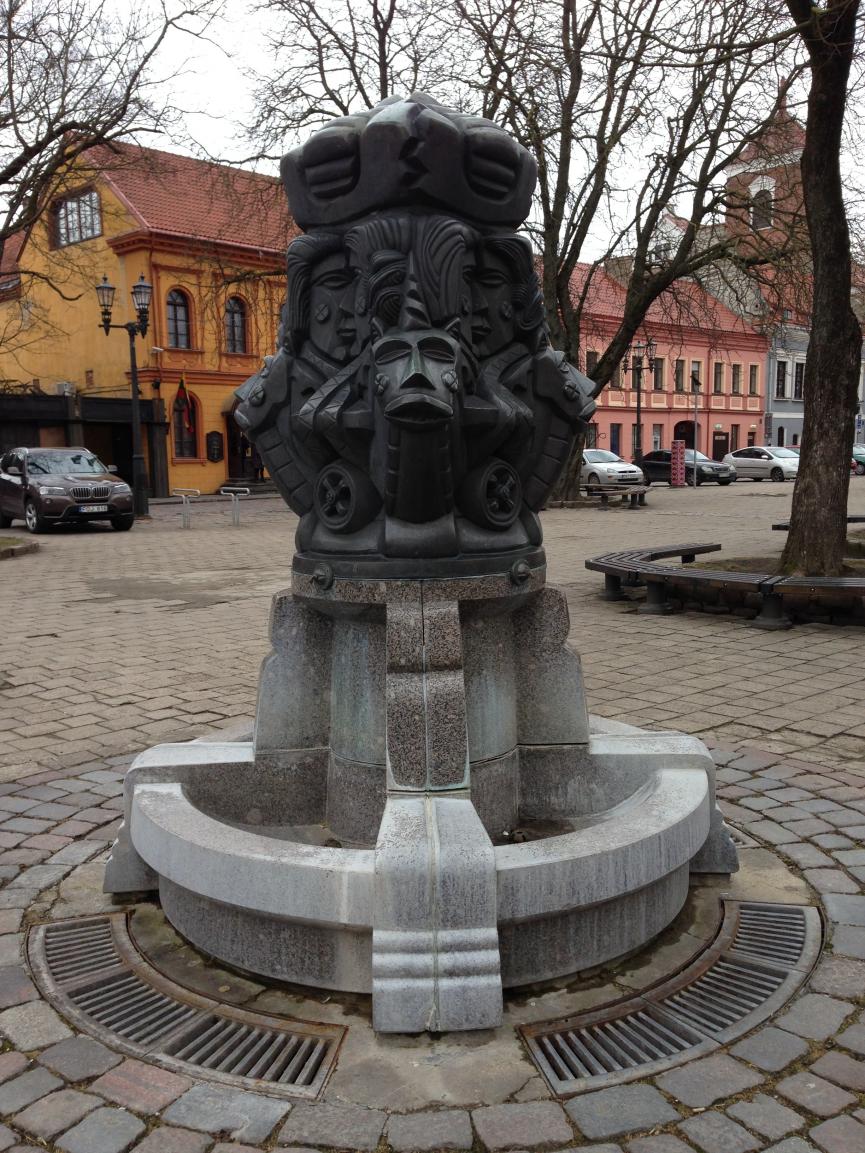 The square surrounded by massive Soviet-time monolyths was renamed to support the nation still under the pressure of foreign regime. The square is favoured by local residents of Eiguliai district, one of the biggest in Kaunas, and the fountain is a real joy on hot summer days. 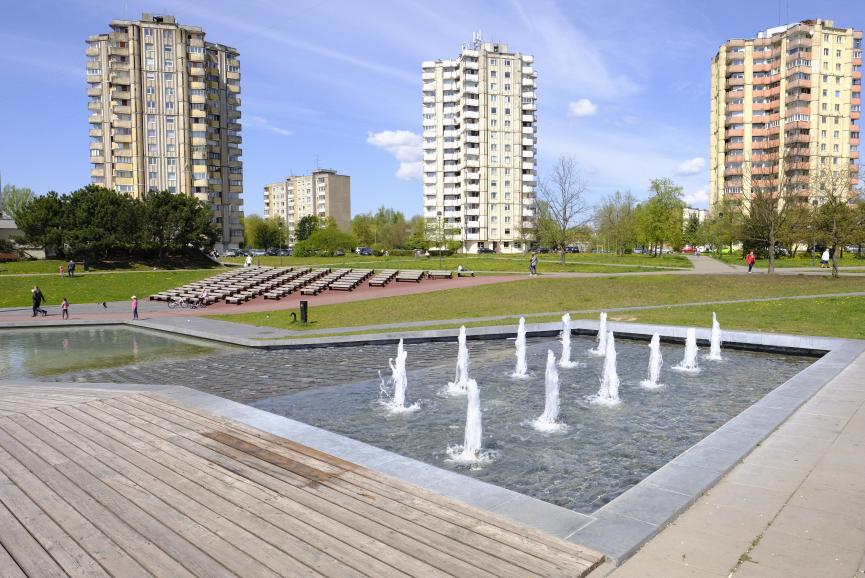 The fountains in Kalniečiai, Dainava and Draugystės parks mostly gather around Kaunas residents who have escaped from the hustle and bustle of the city and enjoy the peace in a large, green park. All three fountains are contemporarily renovated and invite passers-by to refresh and enjoy at least a moment of the feeling that you are not in the city but in a relaxing nature. 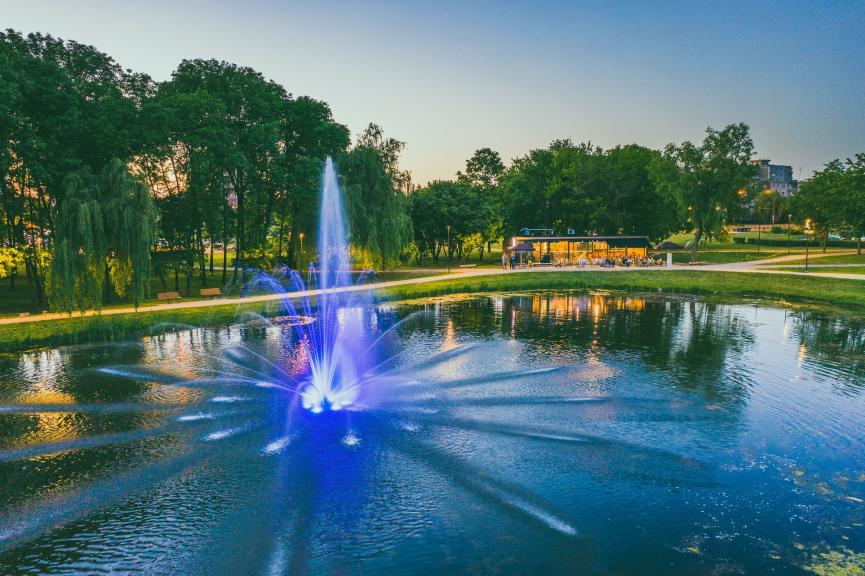 In Kalniečiai park, you can watch the colour show while sitting in a cafe. Photo by A. Aleksandravičius

There is also a bike route, about 14 km long, that invites you to discover even more fountans in Kaunas. The route is mapped out for your pleasure! 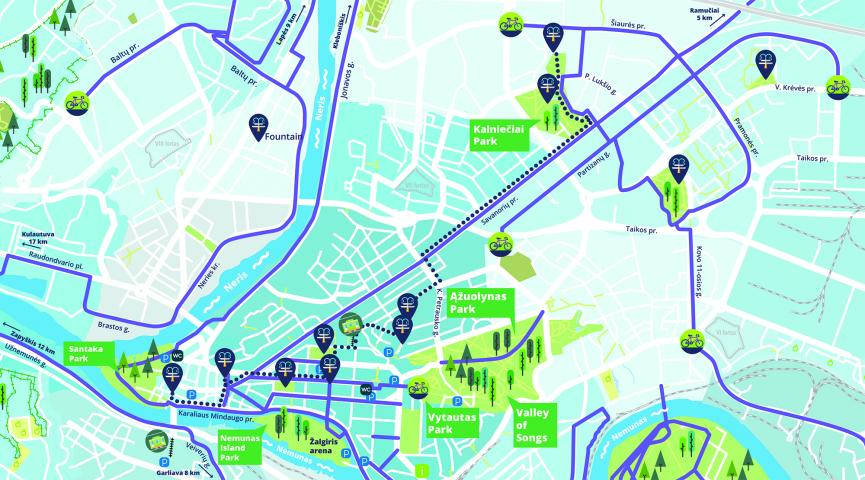