Žilvinas Švarplys has been organising concerts for 12 years now, with a little help from his father. We hope the project never comes to an end. 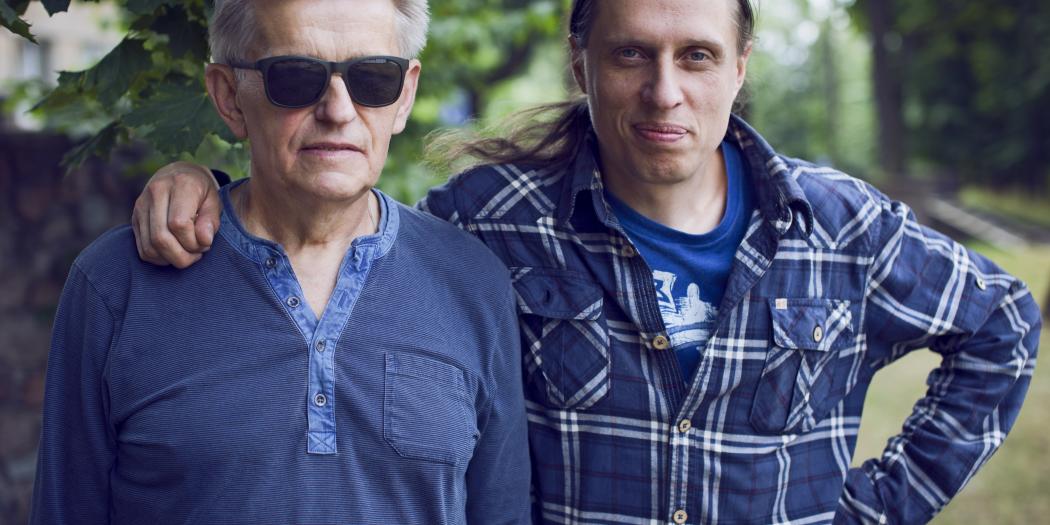 Music in its essence, music with roots. Music that has risen above – or has never descended till borders that were relatively recently marked on the map. Music without long lists of demands and probably without business class tickets. Music that is open and inviting. This is world music, and since 2006 its ordinary non-plenipotentiary ambassadors in Lithuania are GM Gyvai, or Good music live.

Žilvinas Švarplys was born in Kaunas and, after some time at the university, spent a decade in Chicago. The youngster who had grown up listening to the quality music collected by his dad Česlovas tried various jobs in the US. The music, though, came to his life unawares, while Žilvinas was cleaning the Chicago University premises located in the fancy Hyde Park district. He got to know one student who said that one music club is looking for a housekeeper.

That’s how, without any particular intention, Žilvinas started working in the famous – even legendary – jazz club HotHouse. The club’s team is considered to be one of the first world music ambassadors in the US, “I was seriously hooked on world music. What’s interesting is that my manager was a very intelligent communist who was fascinated by the fact that I come from Eastern Europe. Because of that, I had many privileges. I could communicate with musicians as much as I liked.”

After all that interaction, in 2006 he started inviting them to Lithuania, where they were all enthusiastically expected by music lover Česlovas.

It didn’t take long to convince the father to embark on this adventure, mainly since no concerts of this type of music were happening in Lithuania. “We thought that we would bring a good band and people will simply come. But that didn’t happen – only ten people came to listen to the Puerto Ricans”, recalled Žilvinas, who also referred to the twelve-year-old events as “out of this world.” But the reality was such that Česlovas would sell the tickets to the first GM Gyvai concerts right on the street.

“Doesn’t get worse than that! Ι would use a credit card to buy the musicians’ aeroplane tickets and frankly, we hardly make ends meet until today. After selling the tickets we cover the debts from past events, but until now we don’t plan our budget, we are not used to it, and it’s less stressful this way. If we started counting, we’d be done with all that long time ago. There’s no money? You must get it, you believe that you can do it and you get it,” says Žilvinas. The concerts organised with his dad and a small but passionate team can be counted in hundreds, just like the representatives of countries and ethnicities of the world who performed in Kaunas, Vilnius and Palanga. Kaunas, by the way, is the city of blues and Persian music is very close to Lithuanian hearts, guarantee the duo of Žilvinas and Česlovas. The first musicians they brought over were blues musicians, and later, one name followed another, an acquaintance provided more acquaintances, and a recommendation turned into a deal. 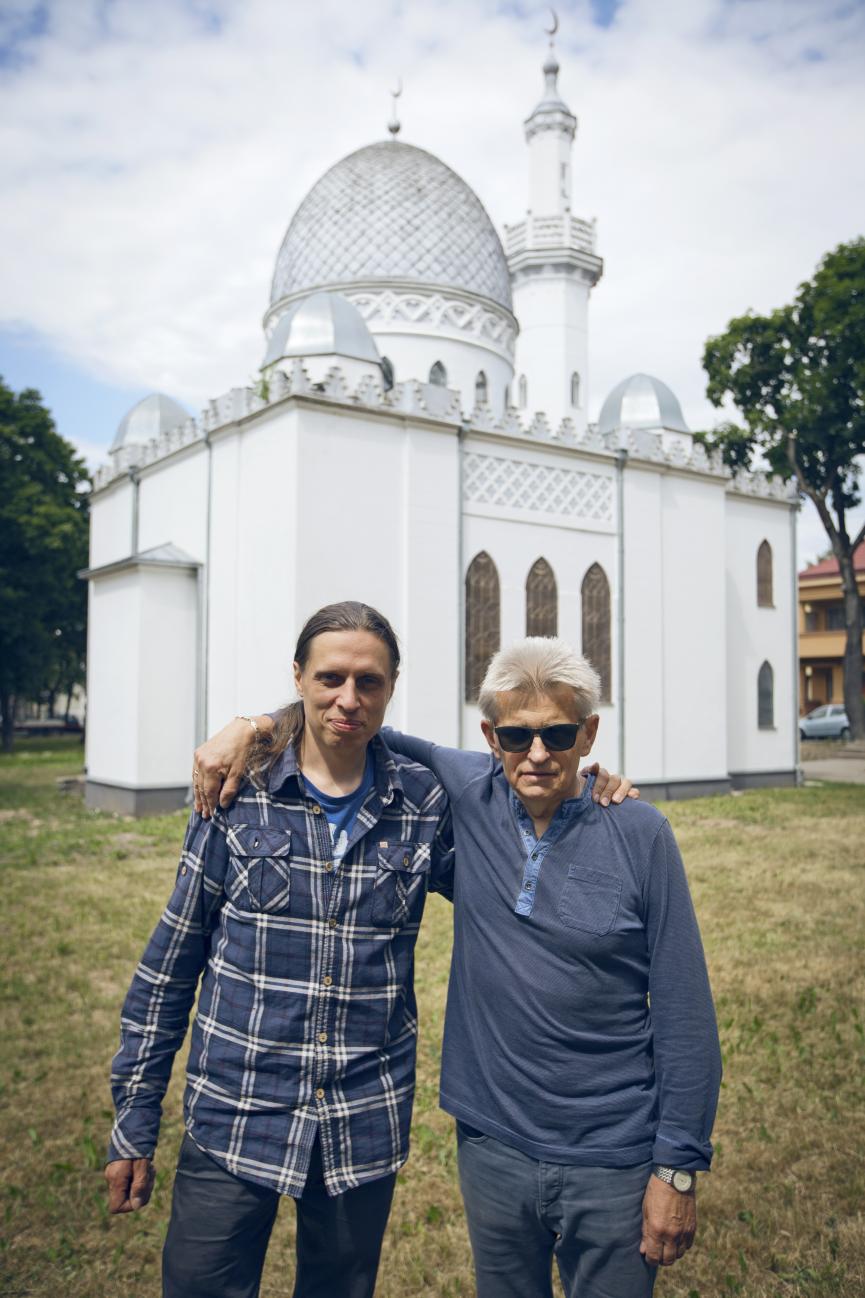 Žilvinas and Česlovas by the only brick mosque in the Baltic states. It's in the centre of Kaunas! Picture by Donatas Stankevičius

Do these ten people who came to the first GM Gyvai concert continue to frequent them? “To be frank – I don’t know. Of course, we have regular visitors because I collaborate with a number of companies who have purchased season tickets. They make up a large part of the audience,” Žilvinas reveals an interesting model of concert organisation. He speculates that there were more patrons of culture back in the interwar period and now business people are not always looking for ways to cleanse their karma. But after discovering the music they stay. According to him, there are not that many young people in the concerts (the number is increasing, though). Maybe they’re afraid of the “world music” term? “Quite often I let in people for free. For example, Roma people never pay for my events; I am a friend of this nation. Senior citizens and students can buy their tickets half price.”

GM Gyvai had organised four concerts in Panevėžys Women’s Prison. Because what else is there to do on a free day in between concerts? Everyday life of imprisoned women was brightened by the US saxophone player Sax Gordon, Lithuanians Parranda Polar and Lapkričio dvidešimtosios orkestras, and they, of course, loved it. Three concerts were held in Vilnius taboras (Roma settlement).

Interestingly, Žilvinas claims that the question of locations is less problematic in Kaunas, although people often say the opposite. “Oh, come on, it is simple in Kaunas – VMU Grand Hall, Kaunas State Drama Theatre, Renginių oazė, Kaunas State Philharmonic, Žalgirio Arena amphitheatre, Raudondvaris manor, Adform kiemelis, but in Vilnius we are forced to migrate between the Odd Man Theatre, Russian Drama Theatre and Vasaros terasa.”

Of course, Žilvinas is not even trying to compare Kaunas or Vilnius clubs and concert halls (by the way, currently it’s trendy to organize concerts of the same musician in two Lithuanian cities, but GM Gyvai is not giving in to it!) with community clubs that he discovered in remote Chicago neighborhoods after some time spent in the US. Such places are free from social clichés, fakeness or a sense of time, “They are real.” Now, talking about realness and communication without limits – one of the Žilvinas dreams is to open a public bath because there is a lack of them in Vilnius, but not in Kaunas! “Bathhouse provides a very communal atmosphere. You can’t hide anything there, unlike on the street.”

Speaking about a project that was born within the framework of GM Gyvai Žilvinas says, “It’s in my nature to bring people together.” He has started doing that while in the US. For example, Chicago is visited by Ali Farka Touré from Mali. Žilvinas quickly calls his blues musician friends and brings them all on the stage, thus pushing them out of the comfort zone, “At the time I didn’t think that I will have to record such unexpected formations.” This quality of bringing people together brought him to one more record company One Root Music, and Lithuania became the crossroad for musicians.

The first album recorded here was MaLituanie. It was a musical collaboration between Baba Sissoko from Mali, Viktoras Diawara, who also comes from this country, multi-instrumentalist Saulius Petreikis and vocalists Laurita Peleniūtė and Indrė Jurgelevičiūtė. “The project was wonderful, but I had no clue about recording,” laughs Žilvinas. He continues to care more about the content rather than format. But despite that Žilvinas started thinking that the project should begin maintaining itself. After all – the world is noticing.

The second project by One Root Music was the album Solo & Indre by Senegalese Solo Cissokho, who brought a popular Western African string instrument kora with himself, and a Lithuanian kanklės (chordophone) player Indrė Jurgelevičiūtė. Gucci fashion house got interested in one of the duo’s piece and bought the rights for a video soundtrack. The project travelled to many world music festivals in the US, and the albums sold well.

The Griot Blues project which includes the Chicago blues legend Mighty Mo Rodgers and Malian multi-instrumentalist, the master of “talking drums” (tamani), Baba Sissoko, is currently touring in Europe. By the way, quite recently, musicians from the Tuvan Republic met with Tuaregs in a studio in Vilnius and recorded nine songs together, despite being unable to communicate in any language. “In the future, I would like to organise the recording sessions somewhere in the village, for three or four days,” says Žilvinas. He continues to learn about the secrets of the music world and look for the balance between art and business.

July’s issue is dedicated to radio, and GM Gyvai has something to say about it. “World Music Radio (PMR) currently is more of a playlist that is my friend occasionally updates with new music. Maybe, in the future, we will have radio shows that will match the radio format more. We don’t necessarily play the musicians who performed at the GM Gyvai events; we generally broadcast world music.” Why is there a need for this radio? “Because we’re still underground.”

We must mention the project Juke Train which is concerts on... trains. You can find a few dozen videos on YouTube. From KeyMono to Žalvarinis. “Maybe we should organise a Juke Train festival somewhere in a small train station between Kaunas and Vilnius?” asks Žilvinas and also answers right away – that requires hands and time.

If not by train then by other means, but GM Gyvai will visit Kaunas in the summer three times. Turkish psychedelic music band BaBa ZuLa’s concert will take place on the 12th of July, on the 24th you will hear two blues masters Carlos Johnson and Chris Cain and an Italian Luca Giordano band. And what about August? Follow GM Gyvai to find out!