As every year the Pažaislis Music Festival is returning to Kaunas city and Kaunas region, as well as other concert spaces all over Lithuania, and this year the festival is in the light of the Centennial of the restored Lithuania. The music fiesta is starting for the twenty third time and is inviting all of You to the three month marathon of marvellous events. In almost a quarter of the century the festival has created the deepest traditions, became well known in all the regions of Lithuania, and the masses of listeners that come to the events of the festival shows the exceptionality and importance of the festival itself.

The twenty third Pažaislis Music Festival will start in the beginning of June and last till the beginning of September. The summer music fiesta will be filled with 43 different programmes, that will be hosted by the traditional concert spaces in Kaunas and Kaunas region, and manors that are constantly renewed and started to play a new and important role to the culture of the regions. The sounds of the events will also reach the churches and the unusual spaces beloved by the listeners where the original unforgettable aura is given to the concerts.

The most important accent of this year festival is the Centennial of the restored Lithuania. The biggest part of the events will be dedicated to this anniversary. The festival will also mention all the most important dates to the music world and to Lithuania, and introduce the exceptionally exciting event ‑ cooperation with the growing communities of the Kaunas city and Kaunas region. The festival and the community of Kaunas Aleksotas district will invite you to the fiesta at Kaunas Vytautas Magnus University Botanical Garden where the listeners will have an opportunity to listen to the Lithuania Chamber Orchestra and the soloist Lina Dambrauskaitė, and the Kulautuva community will celebrate the 85 year anniversary together with the vocal band "Jazz Island" led by Artūras Novikas. Traditionally, the festival will invite the listeners to the Feast of the Assumption at Pažaislis Monastery to listen to the Kaunas State Choir performance; music by Johann Strauss will be performed by the Kaunas City Symphony Orchestra conducted by Vilmantas Kaliūnas with the soloists Raminta Vaicekauskaitė and Tomas Pavilionis at the Kaunas Yacht Club. This year as the prelude to the festival the Kaunas carillon will sound one day before the opening concert, and the next day the programme dedicated to commemorate Maestro Virgilijus Noreika will be performed by the Lithuania State Symphony Orchestra conducted by Gintaras Rinkevičius and three wonderful soloists: Edgaras Montvidas the former student of Virgilijus Noreika, and two winners of the first Virgilijus Noreika Singers Competition Tetiana Zhuravel and Modestas Sedlevičius. The closing concert of the festival will present the rock opera "Eglė" by Laimis Vilkončius performed by the Lithuanian State Symphony Orchestra, Kaunas State Choir conducted by Gintaras Rinkevičius and exceptional soloists.

The central axis of the festival will traditionally be the drama staging near the Kaunas Castle. This year the festival will introduce yet unseen masterpiece ‑ the musical-documental drama "Lithuania ‑ the State" that has been created according to the tragedy "Mindaugas’ Power" written by Latvian writer Mārtiņš Zīverts.

Several years ago the sounds of the carillon have been introduced in the festival for the first time, now it became the traditional part of the festival. This year the sounds of the heaviest instrument in the world will also invite everyone to enjoy it. Several carillon music concerts will be held in the yard of the Kaunas Vytautas Magnus War Museum and in the yard of the Klaipėda Clock Museum. The pieces for carillon will be performed by Lithuanian carillon players and the virtuosos from the Netherlands Gijsbert Kok, Auke de Boere and Christiaan Winter. The guests from the Netherlands will also play pieces for organs at various churches. The lovers of the organ music will also have an opportunity to hear the guest from Germany Franz Wassermann who will perform on the instrument located at the Kaunas Cathedral Basilica of Sts Peter and Paul the Apostles.

There will be several original programmes for the chamber music lovers. For those who like the sound of the classical guitar: guitarist from Croatia Srdjan Bulat will perform with the Kaunas Piano Trio and with the pianist Rūta Mikelaitytė-Kašubienė and the singer Dovilė Kazonaitė; the guitarist Sergej Krinicin together with the soloist Rita Novikaitė will invite you to listen to their new programme. The singer Andrijana Filinaitė, viola player Rūta Balniūtė and the pianist Giedrė Špečkauskaitė will invite you to the "Journey Through the Centuries";  the violinist Barbora Valiukevičiūtė and her colleagues from the USA ‑ the horn player Raul Rodriguez and the pianist Ieva Jokubavičiūtė will present you the programme „Romantic Moments“. The frequent guest of the festival Ippolitov-Ivanov Piano Quartet from Russia will share with you the chamber music stories; you will be amazed by the highest level of performance by the guests from Austria "Trio Alba"; and the walls of the barn of Akmenėliai Manor will be shuttered by the powerful sound of the "Sostinės Brass Quintet" and the pointed comments of the musicologist  Zita Kelmickaitė.

The Kaunas State Choir will invite you not only into the traditional events, but also to the concerts held at the Kaunas Philharmonic Hall and Vištytis Culture House. The listeners will have an opportunity to hear the impressive cantata Carmina Burana by Carl Orff where the expressive arias performed by the singers Raminta Vaicekauskaitė, Mindaugas Zimkus and Andrius Apšega will incorporate into the choir voices and pianos performed by Mykolas and Motiejus Bazarai, and the numerous group of percussionists. The choir will also present the new Vidmantas Bartulis musical project named "Nobody Will Ever Love You So", dedicated to the Centennial of the restored Lithuania.

The lovers of the academic vocal singing will be invited to listen to the programme performed by the mezzo-soprano Justina Gringytė and the pianist Petras Geniušas; the music project "The Bells of Father Stanislovas" prepared by the charismatic singer Liudas Mikalauskas; the concert "Composers, Lovers, Muses" with the soprano Jūratė Švedaitė-Waller and the pianist Audronė Kisieliūtė; and the thematic evening "Sonet to Love" with the pianist Paulė Gudinaitė, the tenor Mindaugas Zimkus and the baritone Giedrius Prunskus. The anniversary of the singer Sabina Martinaitytė will be celebrated in the concert with the soloist and her students.

Two concerts will be dedicated to the vocal music of baroque. The frequent guests of the festival the soprano Aistė Širvinskaitė, the violinist Miglė Dikšaitienė and the pianist Rūta Blaškytė will invite you to the concert named "Epitalamos. Metamorphosis of Baroque". The authentic sounds of the baroque music will be performed by the mezzo-soprano  Nora Petročenko, the countertenor Algirdas Bagdonavičius and the Kaunas String Quartet. The two exceptional soloists will arrive at the Jonava Joninės Valley. The soprano Lina Dambrauskaitė and the bass-baritone Kostas Smoriginas will invite the listeners to the concert with the Kaunas City Symphony Orchestra.

The guests from other countries will introduce themselves in different genres. The guest from Poland Joanna Ławrynowicz and Petras Geniušas in collaboration with the friend from exotic India the pianist Fali Pavri will invite you to enjoy the piano recitals. The very popular among our listeners, the versatile musician Bruno Bieri, one more time will amaze the audience with the subtile sound of hang and overtone singing, together with the artists from Lithuania will present Viktoras Gerulaitis project "Virility. A Game for Four".

The Blattwerk Saxophone Quartet from Germany will rage in the Pociūnai Airport; the Raudonvaris Manor Art Incubator and the Rietavas Culture Centre will guest the unforgettable concert with the music from the movies "A Night of Italian Films" performed by the Italian accordionist Fausto Beccalossi and the very talented Latvian cellist Ruslan Vilensky.

Three exceptional projects of the twenty third Pažaislis Music Festival will present the colourful world music. Tango and bossa nova rhythms will meet at the one of the most charismatic places the  Babtyno-Žemaitkiemis Manor. Here, the singer from Argentina Lily Dahab and her band will weave these rhythms in one music fabric.

The Vytautas Magnus University hall will host the magical cuban motives performed by the  Latin Grammy winners the Group Son Del Nene with the programme "Intoxicating Cuba”. The passions of the Spanish operetta zarzuela will take place at the Kaunas State Philharmonic Hall performed by the Spanish artists the soprano Nuria Garcia, the tenor Manuel De Diego and the pianist Carlos Aragon and Lithuanian singer the soprano Eglė Strumskytė. 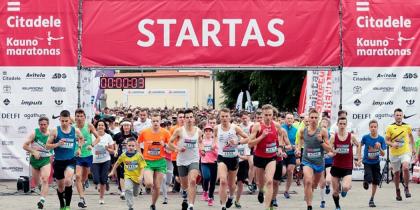 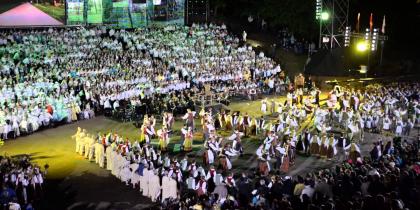