Once you’ve secured a place to stay and marked some events in your calendar, here are some tips for the best possible weekend in Kaunas. 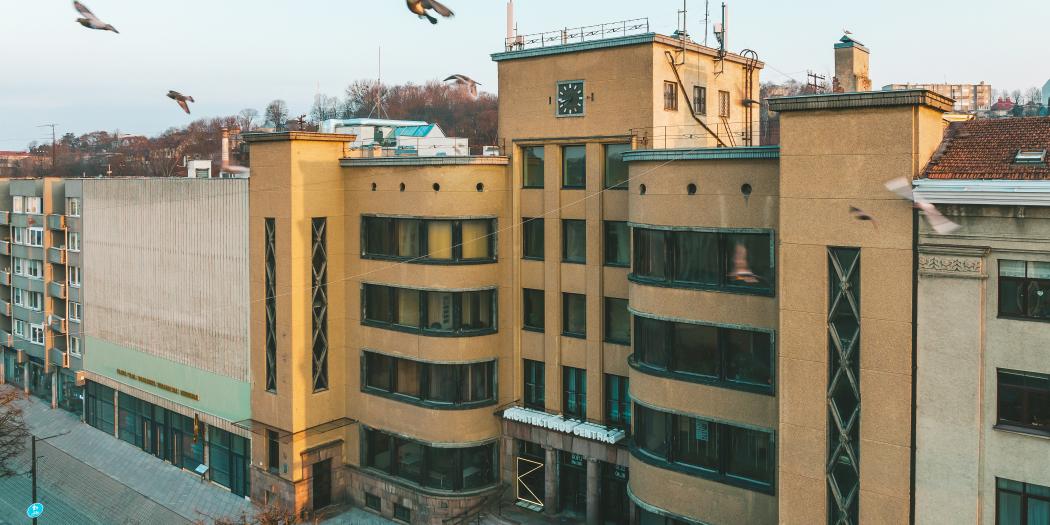 Just one article ago (click here), we presented you with all the best reasons to visit Kaunas in  2022. Once you’ve secured a place to stay and marked some events in your calendar, here are some tips for the best possible weekend in Kaunas.

DAY 1 – Old Town and Beyond

The place to start your weekend in Kaunas is the Kaunas Castle, one of the oldest buildings in town. First built in the 14th century, the whole structure didn’t survive until the 21st century. One of the towers did! It’s today part of the Kaunas City Museum and offers a tight yet in-depth historical exposition. This is where you can hear the snore of the Mythical Beast of Kaunas. What’s that, you ask? The storytelling project by Kaunas 2022 will fascinate both young and older…

A stone’s throw from the castle is probably the best-known mural in Kaunas, called the Old Wise Man. It’s just one of many examples of contemporary street art in the historic city. Look for the official street map of Kaunas called the Wallographer’s Notes to discover much more. 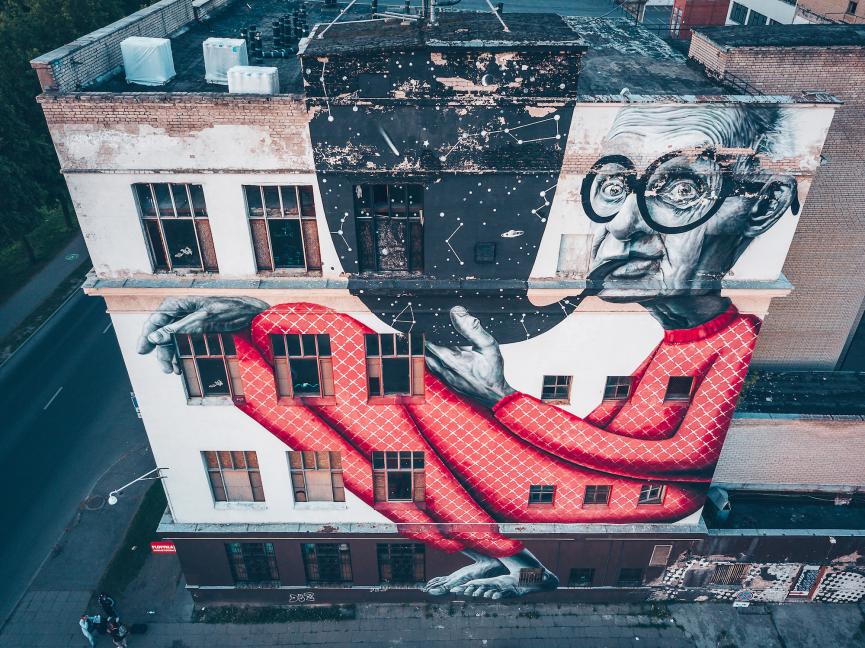 Yet another museum in the Old Town we recommend is the Folk Music Branch of Kaunas City Museum. It’s usually fascinating for young travellers and families – also great for those interested in the traditional music of various regions and its contemporary interpretations.

Vilniaus street, the central axis of the Old Town, is just about to be finished being reconstructed this summer. Nevertheless, the Old Town is still packed with cafes and restaurants – especially the Town Hall Square and streets parallel to Vilniaus. Visit Hop Doc for locally made beer, Chaika for vegan cakes and great coffee, Klimas for late-night drinks, Agave for authentic Mexican cuisine, Nisha for craft beer selection. More places to eat can be found in the Kaunas Gastro Guide. 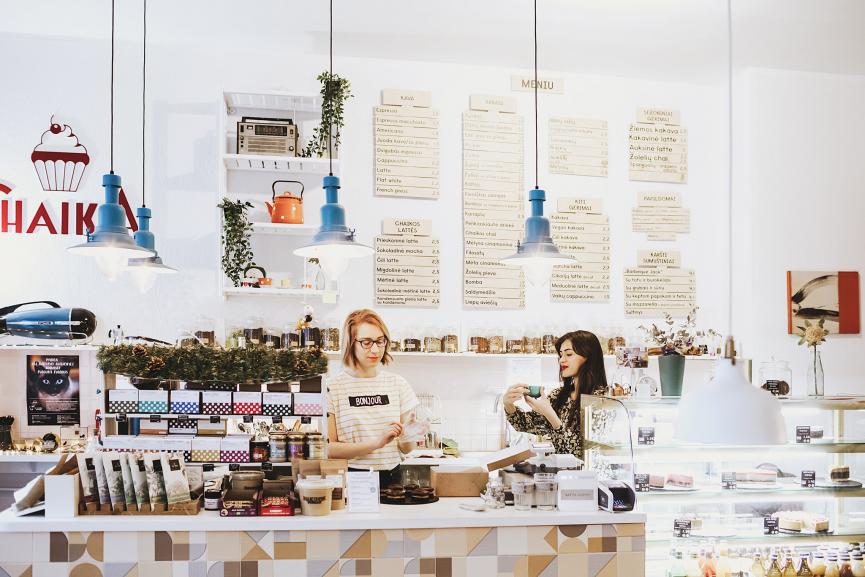 Have some time left before it gets dark? Take a ride to the Ninth Fort. Part of the Tsar-built Kaunas fortress, it’s also home to a museum exploring the history (currently, you can visit the open-air exhibitions) of the Holocaust and one of the most significant war memorials you’ve seen. If you want to dig deeper into the subject, visit the Sugihara House in Žaliakalnis district, the former Japanese embassy, and now a small museum focusing on Holocaust and Litvak history in Lithuania. 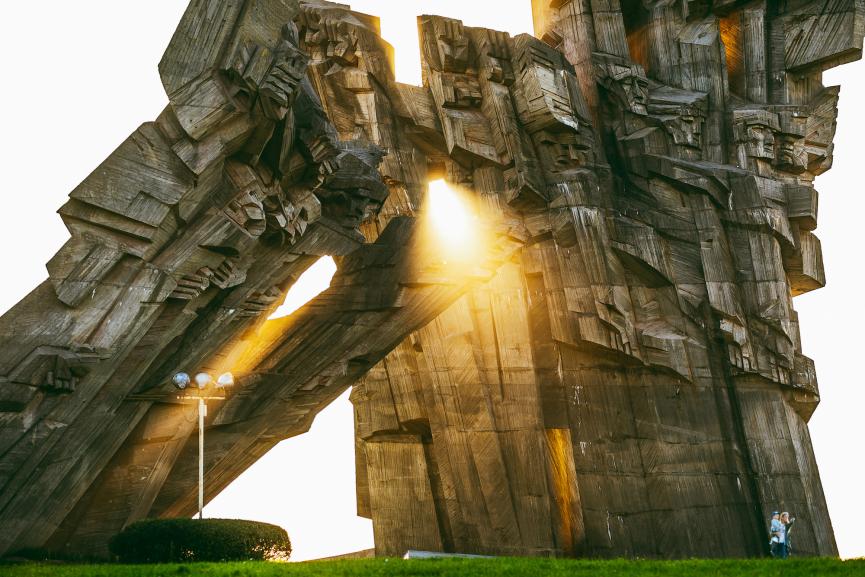 The Ninth Fort memorial. Photo by A. Aleksandravičius

In the evening, why not check what the biggest venue in the Baltic States, Žalgirio Arena, has to offer? A basketball game, a concert of an international superstar, or a cosy night in the adjoining Pakrantė open-air space with breathtaking river views?

If you decide to skip partying on the first night and wake up early, why not have a decent breakfast (Holy Donut, for example!) and head to the Pažaislis monastery we mentioned as a perfect place to stay. Located near the Kaunas Reservoir, it’s surrounded by a lush forest which is excellent for healthy walks. There’s also a museum of sacral art inside the monastery. If the weather permits, you should definitely consider going on a boat trip, booking a wakesurf lesson or simply enjoying the beach. The bar at the Yacht Club, called Marina Taste Gallery, could definitely be located in the Mediterranean...

… It’s time we head back to the centre of the city and dive into the unbelievably dense network of modernist architecture. Hundreds, even thousands of new buildings rose when Kaunas served as the temporary capital of Lithuania between the world wars. In 2022, the modernist Kaunas should be included in the UNESCO World Heritage list.

Don’t miss the excellent examples of interwar art and craft lined along V. Putvinskio street, including the National M. K. Čiurlionis Museum of Art (currently hosting William Kentridge’s exhibition and many more). Its halls are worth an hour or two, as well as the world’s only Devils Museum. Insider tip: visiting most museums in Kaunas is free of charge on the last Sunday of the month.

If you continue walking down the street, you’ll end up in the Yard Gallery, a fine example of community street art projects – you’ll also see the famous Pink Elephant mural on your way there. 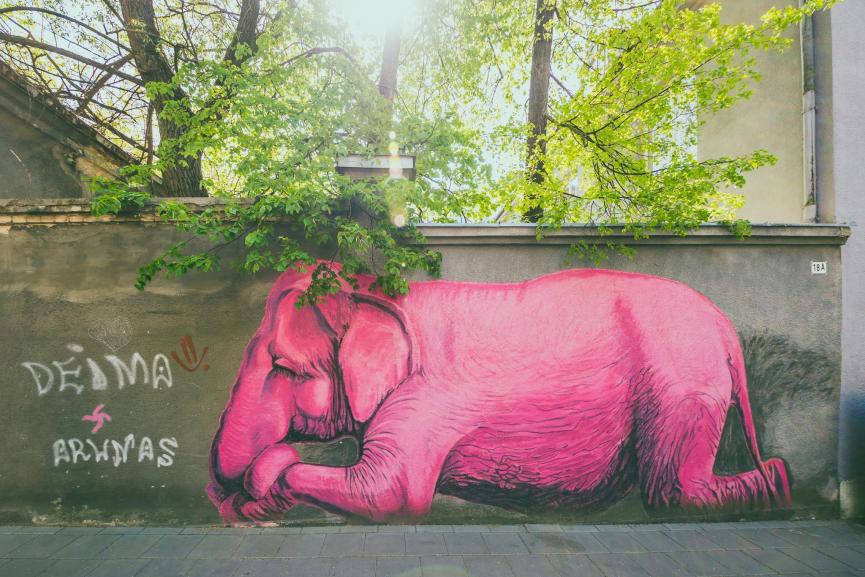 On the other side of V. Putvinskio street is a historic funicular, one of two in Kaunas – another one is in Aleksotas, across the river Nemunas. This one can take you to the monumental Christ’s Resurrection Basilica (please check the working hours of the funicular beforehand and do use one of the many stairs next to it if you miss the chance). The church was started to be built in the 1930s, was converted to a radio factory during the Soviet occupation, and finally consecrated just a couple of decades ago. You can either take the elevator to the basilica's terrace offering a 360-degree view of Kaunas or enjoy the building while sitting on the patio of Kuhne, a lovely local street food place. You can also do both. 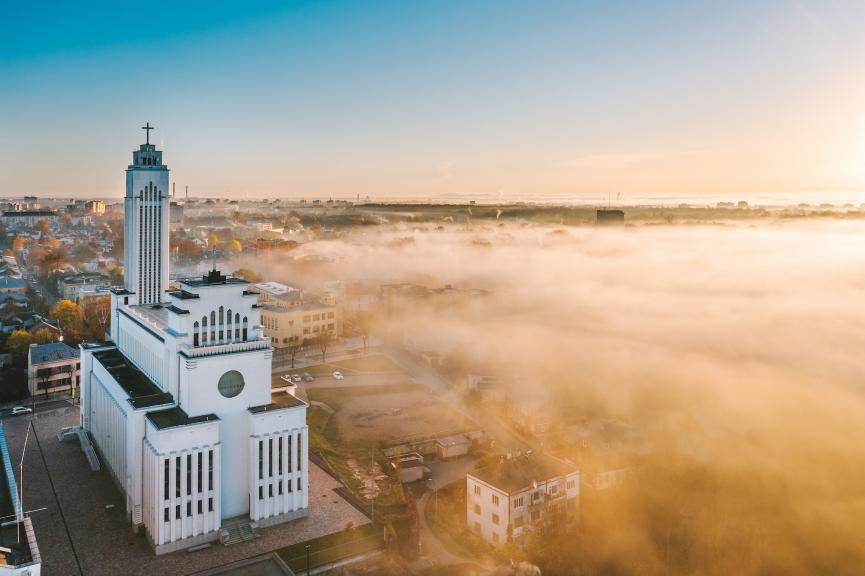 How can one forget mentioning Laisvės alėja, one of the longest pedestrian boulevards in this part of Europe? Full of cafes, theatres, shops and other objects of interest, it’s loved by fans of architecture, students and basically everyone else. It’s also a good starting point for a dinner quest. A stone’s throw from the boulevard are some of the city’s finest restaurants, including Uoksas, DIA and Momo Grill. Book in advance.

At night, a great place to start is the Nepriklausomybės (Independence) square. A handful of stylish pubs and bars have recently opened in it and near it, and Genys Taproom, Rebels and Nuogas are some of the most popular ones. Craft beer hunters should head to A. Mickevičiaus street and visit Vingiu Dubingiu pub, offering an impressive selection of local brews and imports from our closest neighbours.

Another bar to check out if you want to mingle with the trendy local art crowd is Kultūra, located on the steps of Kaunas Picture Gallery, where Marina Abramović’s show is located.

Let's have some more

If you have some extra time, we suggest you visit the peaceful Žaliakalnis neighbourhood up the hill (this is where the funicular takes you), full of modernist and wooden architecture, the busy campus of the Kaunas University of Technology, and the most prominent urban oak grove in Europe. The down-to-earth neighbourhood of Šančiai, carved with cute narrow streets, is also worth considering.

The best place to get illustrated maps covering many of the routes above and many other free publications and some of the cutest souvenirs out there is the Kaunas IN and Kaunas 2022 Tourism Information Centre located in the central part of Kaunas, Laisvės alėja 36.

You’re welcome to check out the maps & guides section of our website and pick any illustrated routes or use the digital version of maps.