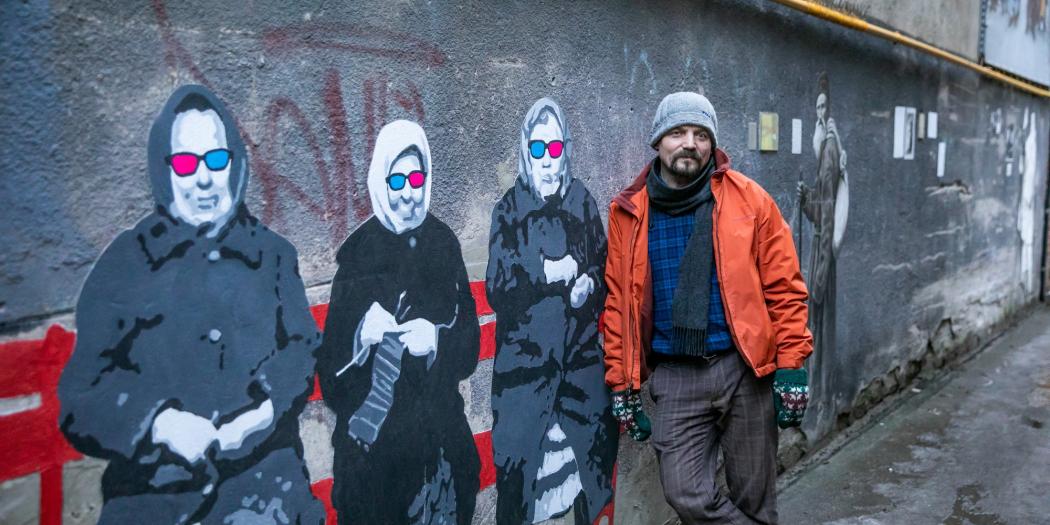 The wish to establish Yard Gallery located in E. Ožeškienės Street courtyard – theoretically open 24/7 – was inspired by the desire to solve the problem of alienation and non-communion between people. The first artwork that appeared on the wall was a cat observing the residents and visitors encouraging to maintain order in the yard. Later the yard was supplemented by a few portraits of former inhabitants of the buildings.

Now, Yard Gallery calls to reflect on Lithuanian and Jewish heritage immortalised by contemporary means. By the way, Bella Shirin, the ambassador of Kaunas 2022, oozing positivity, lives here, too. Kaunas full of culture magazine had interviewed her a few years ago. This time the magazine talked about giving sense to the lives of ordinary people through art with an artist and founder of Yard Gallery Vytenis Jakas. 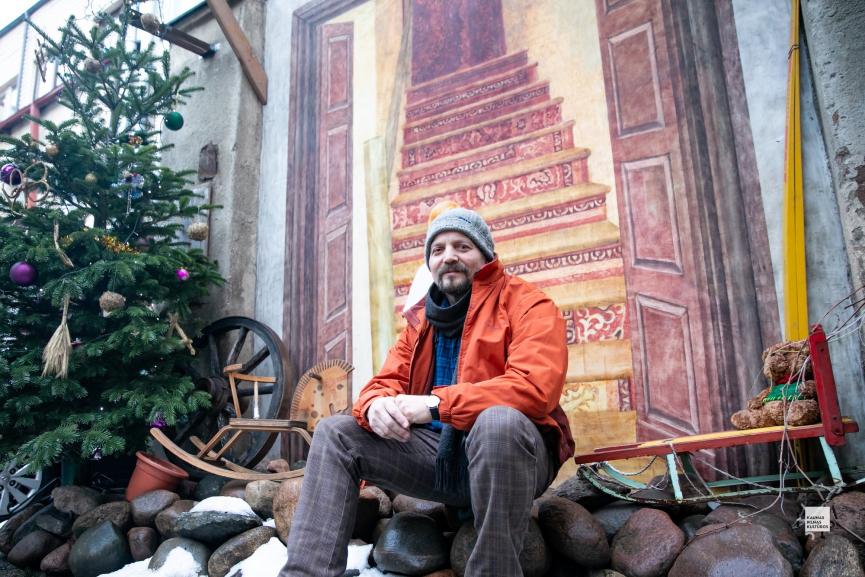 Could you briefly tell us about the yard’s past?

Our yard is about a hundred and thirty years old. During the interwar period, this house was occupied by a Jewish community which had its own traditions. A yard accommodated a large table around which they celebrated and played together; there was a fountain in the middle of the place. During the WW2, the yard was invaded by German soldiers with dogs and a horde of Lithuanians wearing white ribbons. In a few hours, they cleared the yard from its inhabitants.

After that, the empty apartments were filled with new young families, and the yard entered the second stage of its history. At the time, the yard still contained a common table, trees offering shade, and only one car. Neighbours were warm and open to each other. When there was a wedding, it would take place in the yard, if someone held a funeral – all the neighbours brought flowers and mourned together. The yard community was like one big organism.

Immediate communication between people is a value that was very strong back in those days, but when I moved into this house twelve years ago, I noticed the lack of it. When people bought more cars, the fountain and table were dismantled, trees cut and everything was covered in asphalt. It’s like the third stage of the yard. 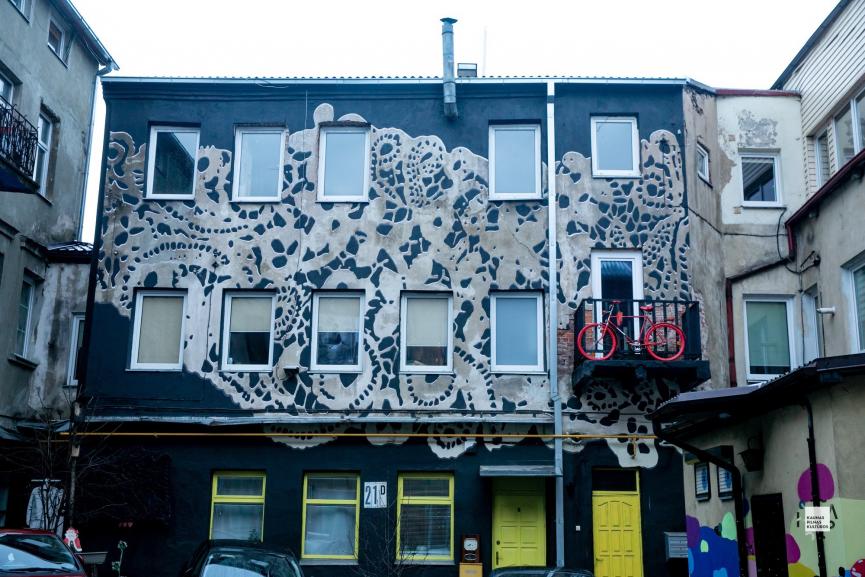 How did the relationship between neighbours change since you started creating the Yard Gallery?

I started the Yard gallery because I wanted to revive the immediate communication between neighbours which existed before. The artworks on the walls have become a sort of pretext to start a conversation with the neighbours, get to know them and start communicating. One of the first neo-frescos that was made on top of the 21A building’s wall was the Trinity. When I painted it, I invited my neighbours to take out their tables and some snacks to the yard so we could get acquainted, talk and celebrate the appearance of the artwork. The evening was a success. We started a warm communication and celebrated until five in the morning. We have continued the tradition since, and the festivities are growing – we started bringing in the inhabitants of the surrounding yards.

What is your personal relationship with this yard?

First and foremost, this yard is my home. Everything that surrounds me here, be it bad or good, inspires to create. An object that irritates someone allows me to generate ideas. For example, discarded items in this yard are often resurrected for a new life, and they become part of an artwork. Everyday life in the yard inspires the topics behind my creative work, makes it possible to find solutions on how to present the works interestingly to myself and to others. For this reason, I would call the Yard Gallery an artistic activity based on life. I used to take a lot from life, and now I entered the stage where I mostly give back.

From the creative side, the yard to me is like a theatre with its scenography. The set designer has to take many factors into account: costumes, lighting, acting, decorations and many other elements that create the spectacle.  It seems to me that this yard also has similar features, and I, as a scenographer, observe them from a distance trying to combine all into one whole. 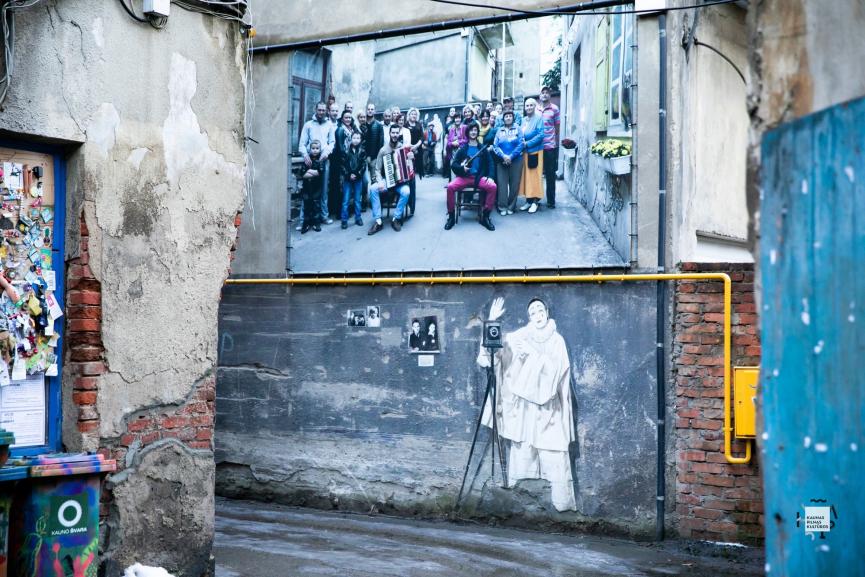 What are the main topics behind the works of Yard Gallery and how were they created?

When I started painting the first artwork in the yard, neighbours became interested in my work. That’s how we started communicating, and they told me about the former residents of this house. I got really interested in the stories I heard from them. I collected many photographs and accounts from my neighbours that inspired my further work. Since then, the stories of the residents gradually appear on the walls in various shapes – from small portraits to full-size images. It is a group of works depicting specific people who are somehow related to this yard. Now the yard contains portraits of Zupavičiai family who were closely linked to Vilijampolė ghetto. I have also painted a full-size woman with roses. She immortalises Dapkevičiai sisters who lived there after the war and grew flowers in the yard. One of the walls is decorated with the image of a woman who used to sweep Laisvės alėja. She had a very long work record and many commendable Lenin’s notes for a job well done. This was a woman who did a lot to make Kaunas clean. Therefore, I have no doubt she deserves to be remembered in our yard.

In filing the Yard Gallery with art, I decided that space needed works that spoke of spiritual values. One such is the Trinity mentioned above. This neo-fresco has the inscription “My Father’s house has many rooms.” It refers to the apartments that surround the yard and also suggests reflecting on human values. A portrait of a boy in the staircase, our Little Prince, appeared with similar intent. This work is an interpretation of Rembrandt’s The Return of the Prodigal Son. It is not a copy, but Rembrandt’s painting has become a starting point working on a topic about returning home. I suggested an idea that to return, you first need to remember where you come from. The yard also contains a stork painted by Tadas Vincaitis-Plūgas that is a reference to the time when our yard had many children. Children really encourage communication and can reconcile people who had stopped talking to each other. Now there are no children in our yard, many of them went to live abroad. So, the stork touches on both topics: emigration and childhood.

And how are the current inhabitants immortalised in the yard?

There is a wardrobe with a wedding dress and a suit painted in the yard. This work reveals the story of the current residents, which is also linked to the past when weddings would take place in the yard. The son of one of the residents in the building got married recently, and his parents saw him off to his bride next to this mural. They contributed to the creative process by paint-spraying their portrait on the wall, and also by put shoes at the bottom of the mural. Also, recently, a picture of two brothers appeared in the yard. I made it at the request of one neighbour, from a blurry photograph. He told me that to this day they are best friends with his brother, so this artwork symbolises friendship.

I rarely work alone and as often as possible try to involve neighbours to make everyone feel part of the project. For example, I needed a lot of help when lifting the bathtub to the balcony. Also, there is a colourful bench in the yard. We decorated it together with temporary residents of the house who rent apartments here. By participating in this community art project, the present population visually commemorates itself in this yard. 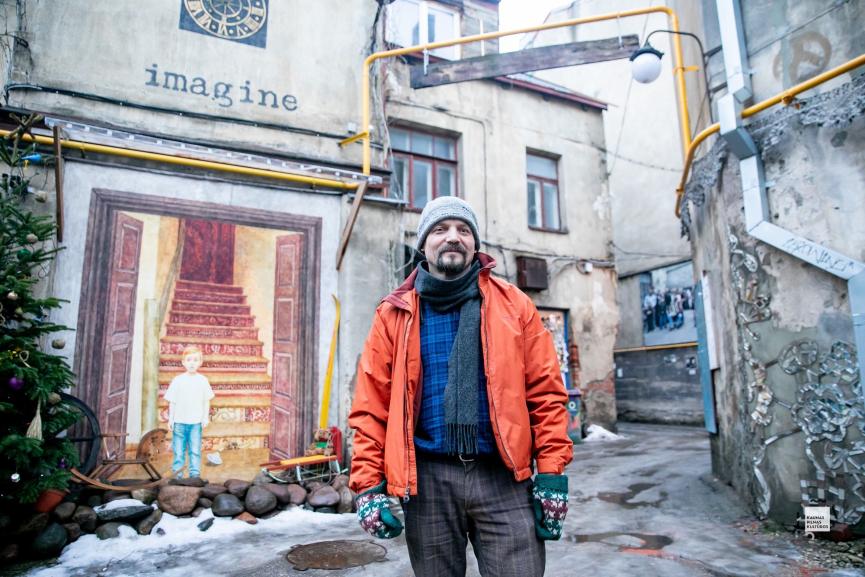 A large part of Kaunas reminds us of famous Lithuanian people through sculptures, museums, drawings or other artworks. Why did you decide to commemorate ordinary people? Why are their stories also important?

I think that ordinary people are as interesting as the famous ones. It just so happened that they did not become famous, but I think it is just as important to commemorate them, and more so – in their own yard. If you talked to each resident, you would see that all of them have a story worthy of a book or at least a portrait on a wall. I don’t believe that one person is more deserving to be commemorated than others. From a spiritual point of view, we are all equal.

The Yard Gallery creation is a process that has been going on for years. Have you accumulated a lot of stories that are still waiting for their turn to be immortalised?

Yes, many stories about neighbours are still waiting for their visualisation. Currently, I have received a scholarship from the Lithuanian council for culture for the creation of the neighbours’ portraits’ gallery. It will be a very diligent and interesting project. When preparing the portrait, I always talk to the person, I want to learn his story and get to know him or her better. This helps create more expressive and sincere works. I plan to divide the western wall of the house 21C into rooms and fill them with neighbours’ portraits that will tell their stories. Bella Shirin, who is currently doing an essential job in reconciling Lithuanian and Jewish nations, will be painted on the ground floor. I will put the image of the Jewish painter Arbit Blat next to her. On the same wall, next to the Venus de Milo, one current neighbour will appear. Every day she takes care of her disabled husband, brings him food, looks after him. She will be put close to the goddess of beauty to suggest an idea that caring for others is the real beauty.

The Yard Gallery is a memorial of a unique place with a history, its people and events. What other areas in Kaunas deserve to be commemorated?

I believe there are many places like that in Kaunas. For example, a community in Šilainiai apartment buildings really has many things to say. You only need active people who would want to work together with neighbours. If there were a lot of people with initiative, I think, the Yard Gallery would be only one among many that tell their stories. I am convinced that every community has an abundant number of stories and cultural heritage. I believe that connecting with members of various communities and involving them in creative activities, we would discover many phenomena of cultural heritage that we previously knew nothing about. I want to believe that when Kaunas becomes the European Capital of Culture in 2022, this process will accelerate and the whole city will be revived.

Justė Vyšniauskaitė interviewed Vytenis Jakas for Kaunas Full of Culture magazine. All pictures by Teodoras Biliūnas.
The article was published in the Kaunas 2022 section of the 2019 February edition. The magazine is available free of charge all around Kaunas and is archived online.