Ms Virginija Vitkienė, the CEO of Kaunas 2022, has revealed some of the programme's highlights and institution's plans for the second half of 2019. 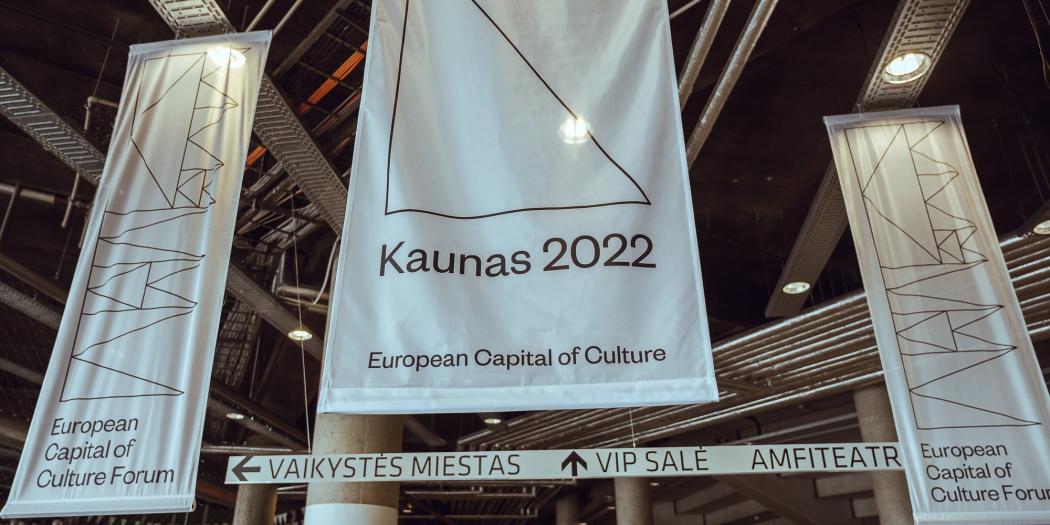 As you might have heard by now, Kaunas is approaching 2022, the year when it will become the European Capital of Culture. Ms Virginija Vitkienė, the CEO of Kaunas 2022, an institution officially operating since 2017, has recently visited a radio show called “Capital of Culture” on LRT Klasika, the Lithuanian national radio’s second programme. She was interviewed by Rytis Zemkauskas, a well-known journalist and all-around culture prophet. Here are the highlights of the show – let’s see what’s cooking in the office of Kaunas 2022 at the moment. 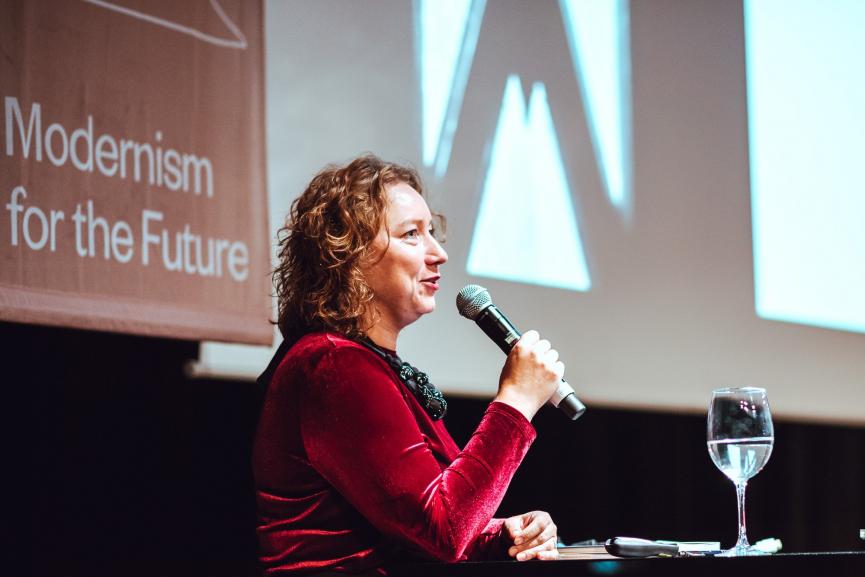 Virginija Vitkienė at the Modernism for the Future conference hosted by Kaunas 2022. Picture by Martynas Plepys

An hour-long conversation started from the discussion about the importance of the European Capital of Culture project in the context of the continent. “I think that one of the most important aspects of European culture is democracy and ability to find compromises. In this era of fake news, we have to constantly nurture, support and encourage democracy, and remain wary. I think that the European Capital of Culture project can help to achieve all of it”, says Ms Vitkienė.

She is confident that it would be too difficult to achieve this goal through the events of elite culture, global projects and manifests of contemporary art. “During this preparation period to become the European Capital of Culture, we expect changes in the everyday communication of residents of Kaunas and its district, rather than art and culture operators only.” Therefore, our programmes aim at uniting communities, businesses and cultural institutions. For example, the International Day of Happiness was celebrated for the first time only last year, but this year, over one hundred various organisations, companies and institutions have already joined it.” 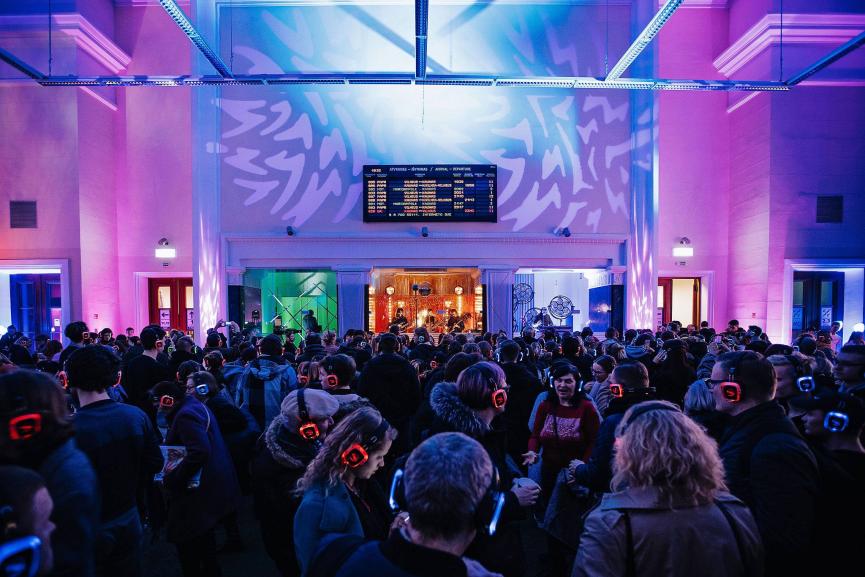 The International Day of Happiness in Kaunas culminated with a massive silent disco in the Kaunas Railway Station in 2019. Picture by Martynas Plepys

Another important aspect is education, the programmes of which already include cultural organisations of Kaunas and Kaunas district. “We organise long-term training with international and local experts that help institutions to redefine their vision and mission. We invite institutions from Kaunas and Kaunas district to rethink their visions and to consider the human factor”, says Ms Vitkienė. According to her, cultural operators should ask themselves why they are cultural operators in the first place: whether their goal is to support themselves or create the long-lasting value for their community and society.

“We invite international experts, because it is beneficial to see examples that inspire, especially to meet with those people who have passed the difficult stages of implementing changes”, added Ms Vitkienė who is convinced of educational projects’ success. She reminded the listeners of the broadcast about the second European Capital of Culture Forum that has featured not only the representatives of the former, current and future European Capitals of Culture, but also politicians, businesspeople, and cultural operators. This two-day event is just an introduction into the eventful summer of Kaunas 2022.

“Last year, we had over 340 events and activities in Kaunas and Kaunas district. This year, we are not going to slow down either. The projects have gained pace in parts of the city away from the centre and small towns of the district. This is where curators and artists work and familiarise themselves with the specifics of the city. Together with residents, they look for identity factors and try to pin them down.” Ms Vitkienė tells about the plans for Kaunas, based on the Fluxus philosophy that unleash playfulness and creativity and which is created by Kaunas-born artist Jurgis Mačiūnas and his peers. She also told that each summer week would feature 5–8 events in communities, culminating in the Fluxus Festival to take place on September 7. During the event that debuted last summer, traffic was closed on Parodos Hill, so everyone who wanted could climb or access it in the most creative fashion. This year, those who climb the hill at Žaliakalnis Fluxus style will also participate in the creative workshop organised just right there on the top of the hill, in Ąžuolynas (Oakwood Park). We expect the evening here to be a long one. 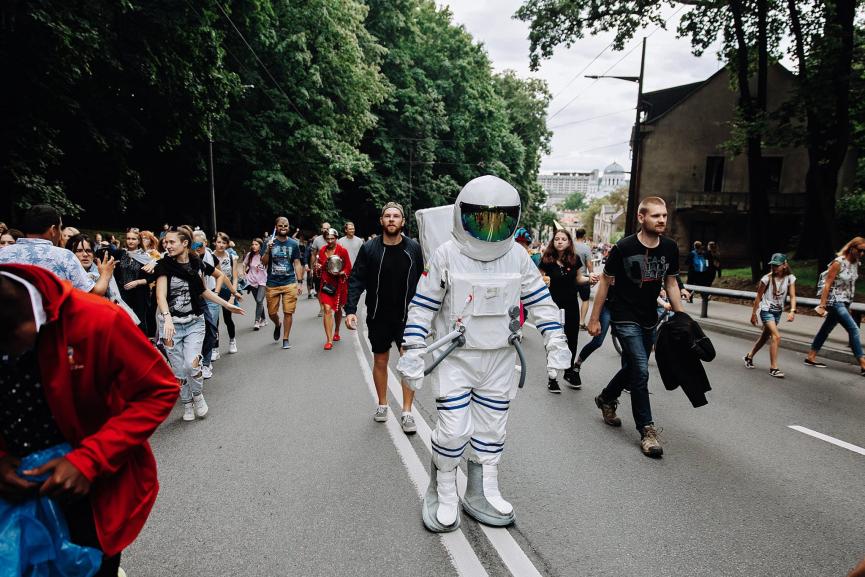 Why climb up the hill when you can fly?! A moment from last year's initiative captured by Martynas Plepys

Even though this summer alone Kaunas 2022 will initiate / host over 100 events in Kaunas and Kaunas district, Ms Vitkienė has also mentioned the activities to take place in autumn as well. October will bring CityTelling Festival initiated by the Memory Office, one of the Capital of Culture programmes. It aims to open those pages of history that were ripped off, ruined, otherwise destroyed or forgotten. For example, there was an orchestra active in the Kaunas Ghetto that performed not only the classical pieces but initiated the creation of the new ones, right at that place as well, saving people imprisoned there from breaking down. It is planned that Kaunas City Symphonic Orchestra will play these exact pieces created in the Vilijampolė Ghetto during the festival. They will be introduced through the personal ghetto prisoners’ stories as well.

“The CityTelling Festival is designed to achieve one of the most important goals of our programme. It is the perception of the city as a multicultural space, promotion of openness to engage in dialogue, reducing the hostility, emotional barriers and encouraging tolerance towards one another. We expect that by 2022, Kaunas will become more open, more prone to accept various opinions and ethnicities”, tells Ms Vitkienė.

When Rytis Zemkauskas asked if there is a possibility to join Kaunas 2022 without fully engaging in cultural projects and abandoning one’s main activities, but still being able to escape everyday life for a short time, Ms. Vitkienė said that everyone is welcome in community meetings that take place in Kaunas neighbourhoods and the settlements of Kaunas district. “Moreover, if you envision the synergy between your business and the ideals of the Capital of Culture, and have a certain space that you have not used to the fullest yet, you can offer it for artistic residencies and activities, and, thus, you may also become an important part of Kaunas 2022.”

Even though two and a half years remain until the official start of Kaunas 2022, it is already known that this project will be implemented by more people than are currently working in the organisation. “It is planned that over 60 cultural organisations from Kaunas and Kaunas city and entire Europe will work together. We will also have over 300 partnerships all over Europe: such relations will allow us to organise around 60 main events and over 300 smaller ones”, reveals Ms Vitkienė. According to her, this is why various gatherings are already organised, including the European Capital of Culture Forum, during which representatives from other countries share their best practices and also discover Kaunas as a reliable partner. During the broadcast, Ms Vitkienė said that she expects that the most important legacy after 2022 will include close, active and mutually beneficial relations of Kaunas and Lithuania in the cultural sector.

“I believe that 2022 will unite us: we will discover Kaunas in ourselves, we will meet its history face to face, we will understand in our full capacity that we are a part of a multi-layered European cultural tradition”, said Ms Vitkienė during the show.