When you’re done with sightseeing, the cultural institutions, venues, restaurants, boutiques, museums and galleries are ready to feed your inner adventure animal. 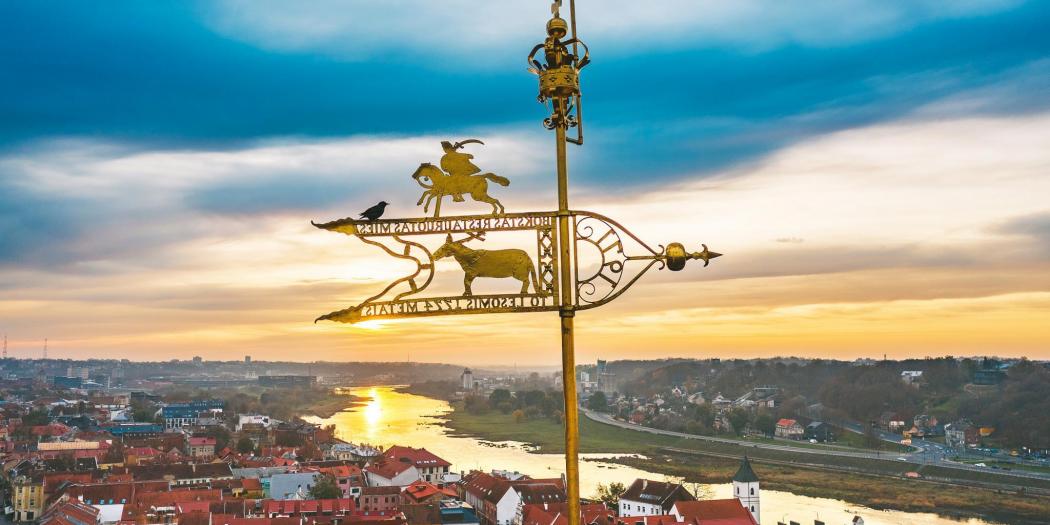 The leaves are gone, which means the golden part of autumn is over, which is perfect for sightseeing in Kaunas! You might need an extra layer of clothes, but the truth is our modernist architecture and street art are much better visible in late autumn than in the middle of the summer.

When you’re done walking around Kaunas, the cultural institutions, event venues, restaurants, boutiques, museums and galleries are ready to feed your inner adventure animal. Here are the most anticipated events in Kaunas this month! Its culmination will be the lighting of Kaunas Christmas tree on November 30 at the Town Hall Square.

A packed arena, green and white hearts, sincere shouts and hopes dedicated to the most popular basketball team in Lithuania, BC Žalgiris Kaunas. The new EuroLeague season is set to reach new record highs, and Kaunas is already contributing to that. The home games have been selling like crazy! Check the schedule and secure your seat by purchasing a ticket here.

The team’s younger brother, FC Žalgiris Kaunas, is currently participating in Lithuanian A league. Its last home game this season is scheduled for November 23 in the NFA stadium in Žaliakalnis.

A season that has just started is the ice hockey season. Last year’s Lithuanian bronze winners, Kaunas Hockey, have contributed to the popularity of the sports in our city. There’s a new team debuting in the National League this autumn – it’s a joint team of Kaunas and Klaipėda ice hockey schools. The home rink of both sides is Kaunas ice arena in Žaliakalnis. The nearest games are scheduled for November 13, November 20 and November 27.

On November 16-17, the Kaunas Photography Gallery will host the first Kaunas Art Book Fair, focusing exclusively on the culture of art publishing. Over 15 publishers/artists/bookstores will represent their publications. The programme also includes exhibitions, lectures, workshops etc.

Fashion, style, beauty, lifestyle – these are the keywords of Moters pasaulis (A woman’s world), a fair that’ll be held in Žalgirio arena on November 14-17.

The official start of Christmas season in Kaunas is November 30, but there’s at least one Christmas fair before that. Molas mall suggests you take care of your gift list on November 29-30. The traders will offer fashion, food, interior design items etc. The festive gift wrapping will be free!

Many travellers think food is the best souvenir. If you agree, we suggest you visit the Kaunas Food fair scheduled for November 30 in Žalgirio arena. Dozens of local producers of both meat and vegetarian products, baked goods, drinks etc. as well as plenty of chances to taste everything – what’s not to like?

For boutiques and kaunastic fashion and accessories, head to our article “Shopping in Kaunas”.

As every month, the National Kaunas Drama Theatre offers a few shows surtitled in English for non-Lithuanian speakers. On November 13, you’re welcome to see “Sombras’”. Theatre director Gintaras Varnas based the two-act performance on the works of Federico García Lorca and Luigi Pirandello. “Hamlet” is scheduled for November 17. Vidas Bareikis directs this contemporary take on Shakespeare’s classic work. On November 24, the stage will be given to “The White Shroud”. The dramatisation of the Lithuanian classics by exodus writer Antanas Škėma (1910-1961), directed by Jonas Jurašas, invites one to meet Antanas Garšva, who’s wandering through his cracky memories in places of the interwar Kaunas, High Panemunė and Vilnius.

On November 20 and 22, the Kaunas based dance company Nuepiko are hosting a premiere of their newest production called “Overheated”. It’s a self-reflection, which hopefully will become a tool for the performers and audience to become more aware of the trending topic of being overheated. Where? In the National Kaunas Drama Theatre!

Between November 16 and 22, the Kaunas State Philharmonic will be home to the contemporary music festival “Iš arti”. The festival was born in 1997 out of the desire to promote the work of Kaunas-based composers and encourage relationships between Lithuanian musicians from different regions. Gradually, the modest event grew into a substantial annual showcase of modern music, featuring more or less new symphonies, dances, psalms, concertos, rhapsodies, suites, conversations and lectures.

In November, you have the chance to catch some of the most interesting Lithuanian indie acts in Kaunas.

Junior A, a one-person project, started recording lo-fi electronic music in his room and almost immediately after uploading his songs he got onto Spotify’s US Viral playlist. He’s got five EPs in his pockets now and is bringing his newest, Spa Day, to Kaunas on November 9.

Planeta Polar, a new version of a band that brought cumbia rhythms from tropical Colombia to arctic Lithuania, will be playing at “PuntoJazz” attic on November 16.

Kabloonak, an artist that writes songs fitting perfectly into your pocket and keep you warm while listening, will replace them in the same venue on November 17.

Head to “Gargaras” on November 23 if you’re into indie rock that combines alternative country influences and modern rock’n’roll drive. This is where Colours of Bubbles will present their new album.

The main exhibition of the 3rd Kaunas International Printmaking Biennial “Beauty” is running at M. Žilinskas Art Gallery until November 17.

You have until the end of the month to catch the personal exhibition of Pranas Griušys. The iconic painter observes and explores the city by reconsidering its’ time and again. The object selected for painting analysis is specific and intimately close. All the works shown in the exhibition are related only to Kaunas City. Catch it at the A. Žmuidzinavičius Creations and Collections Museum. 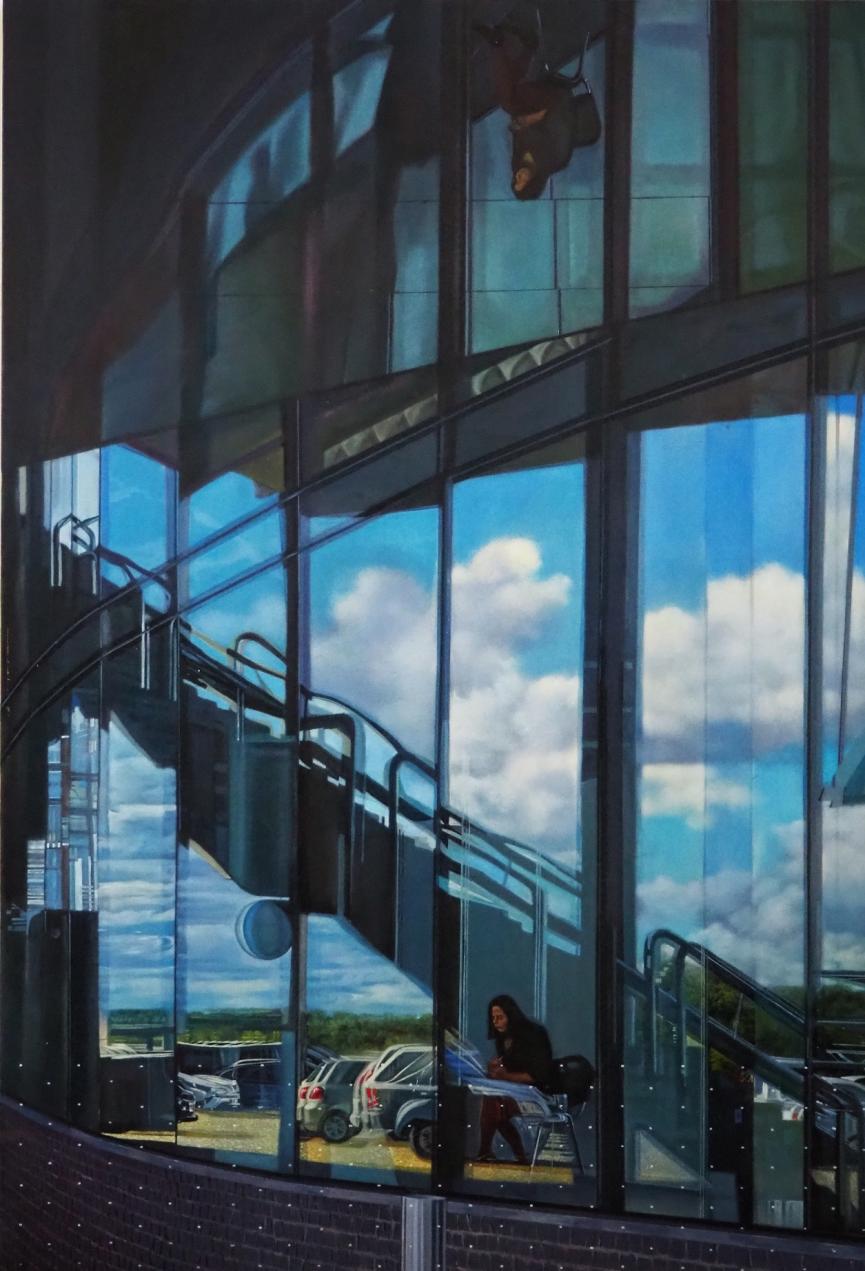 A retrospective of one of the most prominent representatives of Lithuanian contemporary interdisciplinary art Česlovas Lukenskas is currently on exhibit at Kaunas Picture Gallery. This is where the birthday of George Maciunas will be held on November 8. Rumour is the institution, home to Fluxus Cabinet, will be renamed to Maciunas Gallery on that day. Let’s wait and see.

P.S. Many of the museums in Kaunas offer free entry on the last Sunday of the Month, in this case, November 24. More here!

November is all about Scanorama in Lithuania. One of the largest and most prominent international cultural film events in Lithuania brings together over 40 000 film-fans each year. Every autumn, the team introduces a selection of highly regarded European films and best-pics from other continents. Since 2017 the festival has been awarded the EFFE label of remarkable festivals by the European Festivals Association. In Kaunas, the screenings will take place between November 14 and 24 in Forum Cinemas. 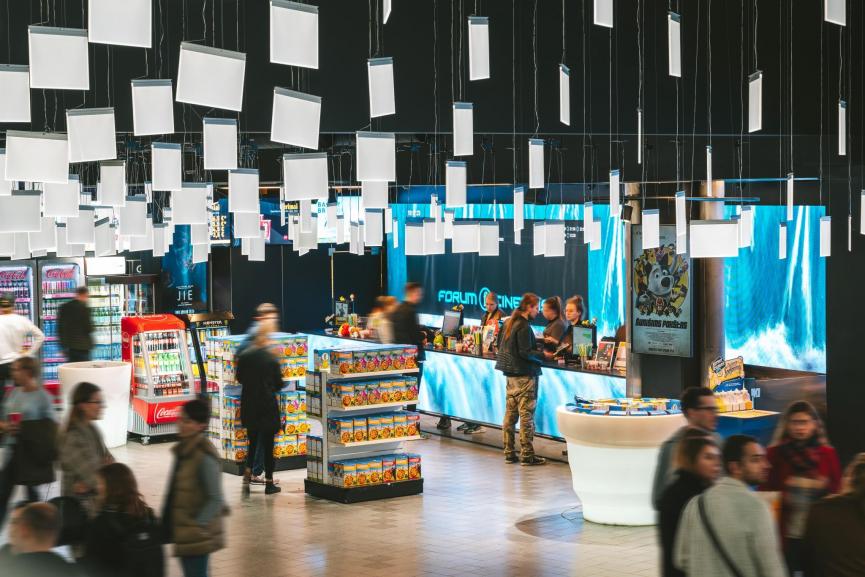 Located at the Akropolis mall, Forum Cinemas fits both blockbusters and carefully selected arthouse movies. Photo by A. Aleksandravičius

TEDxKaunas 2019 is back to our city on November 17 with a topic “Message in a Bottle”. Among the personalities lined up for speeches at Kaunas Cultural Centre are theatre director Kamilė Gudmonaitė who will question human nature, based on a conversational case study at Lukiškės prison, Australian Lithuanian futurist Kristina Dryža who will share how to think mythically and sense archetypally to better understand our shared humanity, yet honor the diverse ways we live and make meaning, and Kaunas-based chef and lecturer Gavin Stewart who will talk about how eating trends have changed over the last five years in Lithuania, and what people can expect in the near future.

Main photo by A. Aleksandravičius