The keyword characterising this season is international. It is grounded on solid, long-matured creative collaborations with artists from Germany, Canada, Hungary, Norway, Luxembourg, the United States, Georgia, and Latvia. 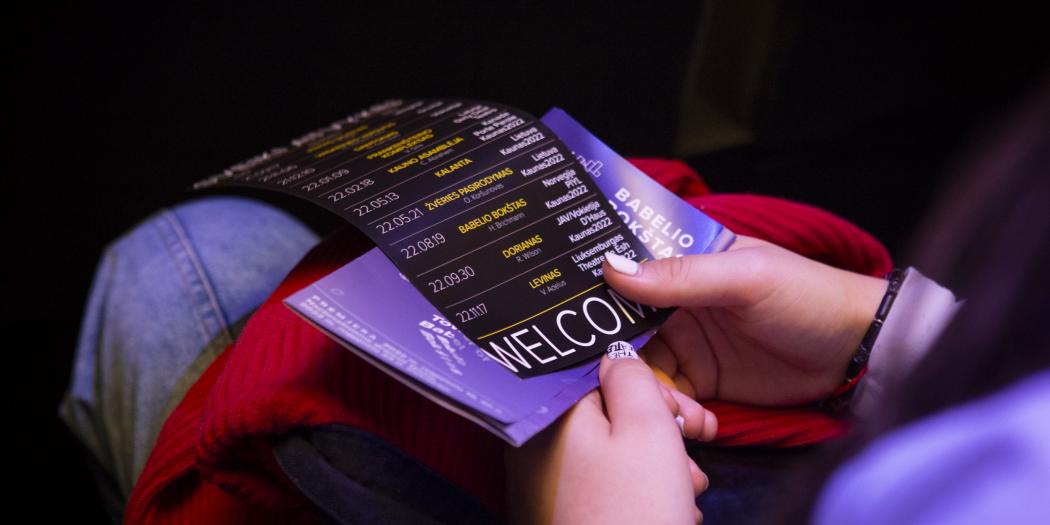 This season will be opened by Henrik Ibsen’s play Peer Gynt, which is staged for the first time on the Lithuanian theatre stage and together with Hungarian artists. In total, eight different premieres will be introduced to the audience.

The 102nd season will be dominated by the world-class stars Robert Wilson, Oskaras Koršunovas, who is working with the NKDT for the first time, Canadian company Porte Parole, rising German theatre star Nikolas Darnstädt, and others. We will greet this exciting season in all kinds of languages: ‘Welcome’, ‘Sveiki atvykę’ (Lithuanian), ‘Üdvözöljük’ (Hungarian), ‘Willkommen’ (German), etc.


During the presentation of the new season, the General Director of the theatre Egidijus Stancikas wished everyone, the artists and the audience, a favourable wind: “The 102nd theatre season begins with a lot of excitement and concern. Will the external obstacles that have accompanied us for the past several years not ruin all the planned creative flights, meetings, and achievements? Let’s hope that everything will be fulfilled.” Looking forward to the upcoming year, Ana Kočegarova, a representative of the theatre partner Kaunas 2022, remembered the year of 2017, when about 150 members of the cultural community met the jury of the European Commission. They all gathered together in Kaunas, in the lobby of the NKDT, where they heard the good news: “Today we are talking about the upcoming premieres; this illustrates that, during this complex and long journey towards the title of the European Capital of Culture, the role of the theatre in obtaining it has been of immense significance. In the programme of 2022, where 1,000 events of various fields and genres – contemporary music, literature, cinema, hundreds of different premieres, dozens of major festivals – will be hosted, the National Kaunas Drama Theatre is one of the greatest partners, carrying a huge load of that programme and organising truly impressive premieres with the most famous European and Lithuanian directors. This perfectly illustrates the fact that Kaunas is becoming one big European stage.” 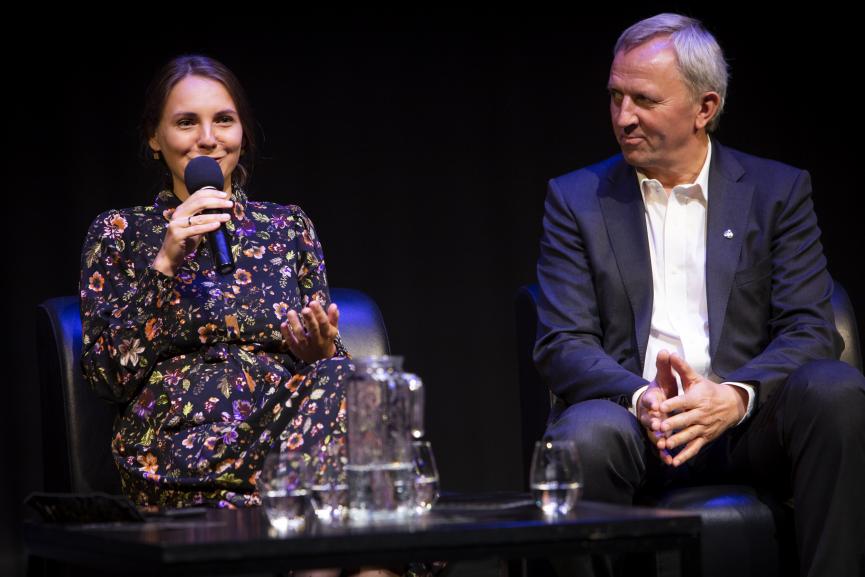 The new season will be opened on September 17, 18, and 19 by Henrik Ibsen’s play Peer Gynt staged for the first time on the stage of the Lithuanian drama theatre and by Hungarian and NKDT artists. Director Csaba Polgár interprets the story of Peer Gynt through the experience of Eastern Europeans, moving the main character from the woods surrounded by trolls to a Soviet apartment building and replacing poetics with sarcasm-enriched humour.

The premiere by the Georgian director Nino Maglakelidze, based on the play Summer Wasps Bite Us Even in November by the contemporary author Ivan Vyrypaev, will take place in the Long Hall in November. “This is a result of our friendship with the Kutaisi Drama Theatre and one of its creators. Last autumn we saw excerpts from Maglakelidze’s work The Wind in the Poplars, written by Gérald Sibleyras; it was awarded for directing and acting. The director has now offered this wonderful  Vyrypaev’s play to our theatre. The work speaks about relationships, trust, and faith,” said Stancikas.

On December 10, 11, and 12, the audience will see the premiere by the young and talented director from Germany – Nikolas Darnstädt. Danton is a confrontation of history and current affairs. Drawing on Georg Büchner’s play Danton’s Death, the artist explores how, during revolutions, political visions are shattered by different interests, individual struggles, and indifference to the world we live in. According to the artistic director of the theatre Edgaras Klivis, a German injection called Regietheater (director’s theatre – editor’s note) can be expected from the director Nikolas Darnstädt, who has staged a play based on Justinas Marcinkevičius’ work Mindaugas at the Šiauliai State Drama Theatre, which has caused a bit of a scandal. Representatives of this practice tend to radically reinterpret classical plays. “I’m waiting for a bold German Regietheater voice here on the stage of Kaunas drama theatre,” said Klivis.

A play created by artificial intelligence

Having mastered virtual theatre, our theatre now proceeds to a play created by artificial intelligence. This co-production idea was proposed to the NKDT by Latvian director Valters Sīlis and the Dirty Deal Theatre. More attentive viewers should remember Sīlis name from the performance Forest Brother shown at the National Kaunas Drama Theatre a few years ago. The upcoming premiere of the Frankenstein Complex is an experiment in transferring text, created by the artificial intelligence module GPT-3 owned by the research company Open AI, to the stage. Latvian playwright Kārlis Krūmiņš has been involved in the creative work with this programme. The innovative performance is being created with four Lithuanian and Latvian actors. By presenting texts written by a playwright and software, the creators will raise the question, whether artificial intelligence is capable of overpowering artists. The performance will be in English with subtitles in the local language. The first premiere is scheduled for January 5, 2022, in Riga, and it will be performed at the NKDT on January 9.

As mentioned by Deputy Director-General Agnė Burovienė, there will be plenty of educational activities for different age groups. „Completely new programme Actor by the Blackboard is being launched. A school class that has picked a performance of the National Kaunas Drama Theatre will have the opportunity to invite one of its actors, who will reveal the backstage stories and the process of staging a play. Another novelty, being created together with Kaunas 2022, is the Theatre Cube, which is a tool to present traditional disciplines throughout the prism of the theatre.  How does this work? As we all know, theatre is a synthesis of arts: music, fine arts, and mathematics altogether.  Regarding our pilot project, we will invite children from 5 schools and, later, 50 theatre cubes will be made and gifted to the schools. The children will have an opportunity to get acquainted with the key disciplines through the theatre: they will learn how to calculate the scale, maybe they will create a scenography by using geometric shapes, and so on,” said Burovienė.

Another significant international project is Babel Tower, which is being carried out with partners from Norway, Iceland, and Hungary. This performance is intended for teenagers (14–16-year-olds). It aims at addressing the global problems from the youth’s point of view and providing relevancy to them by employing the interactive speech of the theatre; thus, in this way, encouraging teenagers’ critical thinking. Each day the society hears about geopolitical changes but how they are viewed from the perspective of a young person? How do they see their future? Do they care about the climate change or decay of democratic principles in modern society? By referring to the well-known biblical motive of the Babel tower, the Norwegian director of the performance Hilde Brinchmann will create an epic concerning faith and opportunities while inviting the participants of the performance to also become the participants of history.

Another novelty is the fact that the performance’s creation will include the good practices of the partners. Professionals of interactive and immersive theatre for youth will gather here. Moreover, all of them are members of the international network PIYL (Participate in Your Life): NKDT (Lithuania), Kompani 13 (Norway, Bergen), Bird and Bat (Iceland, Reykjavik), and Kava Kulturalis Muhely Egyesulet theatre (Hungary, Budapest). The premieres will be held on August 19 and 20, 2022 at the National Kaunas Drama Theatre and on August 23 in Čekiškė (Kaunas district); later, the performance by NKDT actors will be included in the theatre’s repertoire.

Particular attention is given to the education of the youth living in regions further away from the greater cities; therefore, the performance will be shown in localities of cultural exclusion: Čekiškė, Pagėgiai, Naujoji Akmenė, and Alytus.

The international project is funded by the open call Supporting Access to Culture and Strengthening Cultural Education under the Culture Programme of the European economic area financial mechanism 2014–2021, Kaunas – European Capital of Culture 2022, and Erasmus+ funds. 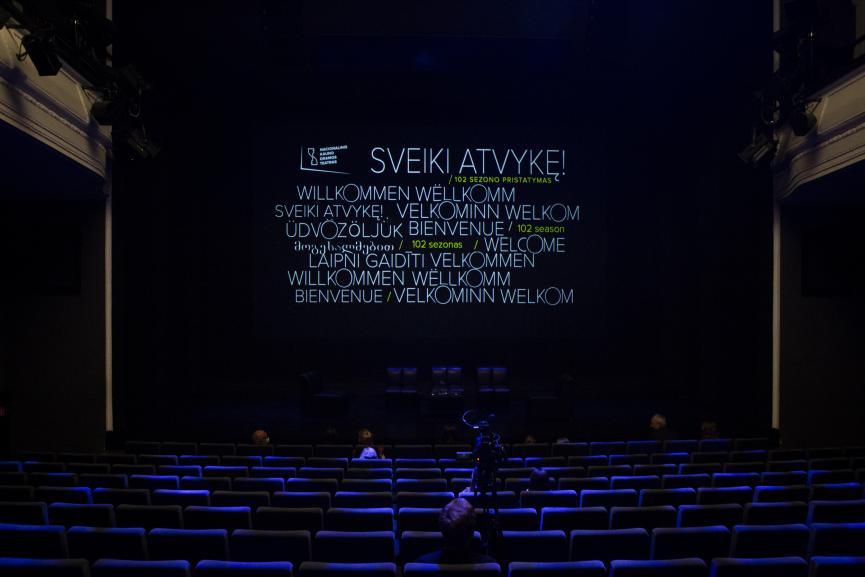 Until summer, the audience will see 3 more premieres: all of them are joint projects of the NKDT and Kaunas – European Capital of Culture 2022.

The Appearance of the Beast, which will be directed by Oskaras Koršunovas, is constructed as a massive event at Kaunas Santaka Park intended for city residents and guests. Afterwards, it will be transferred to the Main Stage of the National Kaunas Drama Theatre. For May 21–25, 2022, a specific process is planned: it will be a creation synthesizing various arts, a joint creative act of artists and the public, and a performative action aiming to create mythical tales and images of Kaunas city, which would intensify the experiences of the identity, unity, and spirit of the city and its residents.

Another performance is related to the events of Kaunas Spring 1972. In 2022, 50 years will have passed since the self-immolation of Romas Kalanta and massive demonstrations against the totalitarian Soviet regime in Kaunas. This performance aims to reveal the dramatic mental experience of Romas Kalanta, his family, loved ones, Kaunas youth, creative intelligentsia, and the whole society choked by the Soviet regime, as well as the traumatic effects of this experience. Moreover, it will also be an attempt to comprehend the experience of this whole generation, several generations, and the modern Lithuanian society, as well as the content behind such notions as ‘sacrifice’ and ‘freedom’.

One more project – The Assembly Kaunas – will be launched in February of 2022. It will be a co‑production with documentary theatre company Porte Parole from Montreal, Canada. By employing the genre of political theatre, the Canadians and Lithuanian actors are prepared to hold an assembly on an issue relevant to the society and, of course, there is more than one of those: the polarization of society, migration, globalism, nationalism, etc. Artistic director Edgaras Klivis sees this project as a public sphere: „It can be stated that The Assembly is being created by the method of the author. Three performances of The Assembly have already been staged throughout the world: in the USA, Canada, and Germany. The fourth one will take place in Kaunas. Though the same method is applied, the performances are vastly different regarding their content since they concern political questions that have polarised a specific society, in this case, the Lithuanian society. Probably, now is the perfect time to stage this performance as we can see how greatly our society is divided. What is the point of it? The point is not to divide people but to hear a voice from outside these heated and often derogatory political chants; maybe, to create a possibility for another way of communication. The Canadians, who will come at the beginning of September, will talk with people and gather the necessary material. Our actors, having a different experience, will also participate.”

The international projects will be continued by the casting for the performance Danton staged by the great director Robert Wilson. At the beginning of October, he will come to Kaunas with a specific goal in his mind: to see the theatre and cast an actor.

The new season allows us to look into the future – the world into which creators and society are returning after the quarantine and isolation by questioning what has been lost and what has been found.