As September turned into its second half, we’ve compiled a list of the most spectacular autumn landscapes in Kaunas. 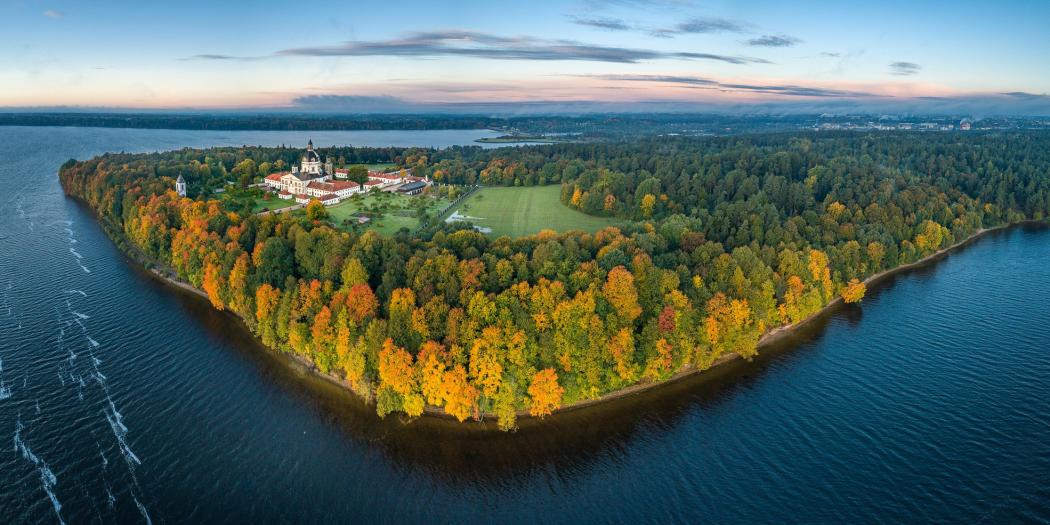 Nature is most artistic in autumn. Trees and plants painted in various shades of red and yellow resemble a talented artist’s creation as the year draws to a close. So, as September turned into its second half, we’ve compiled a list of the most spectacular autumn landscapes in Kaunas.

All you have to do is set a date and wear a photogenic outfit, as a spectacular backdrop is guaranteed. It’s best to reach all these stops on foot. Collecting steps is still trending!

Wednesdays only, until 30 September - unless the Vytautas the Great War Museum extends the visiting programme for the newly renovated carillon tower! It’s worth a hurry - after climbing the 101 steps to the modernist tower, you’ll get a close-up view of the historic carillon and enjoy the spectacular colour-changing panorama from 32 metres up.

Entrance with a museum ticket on Wednesdays from 10 am-7 pm. 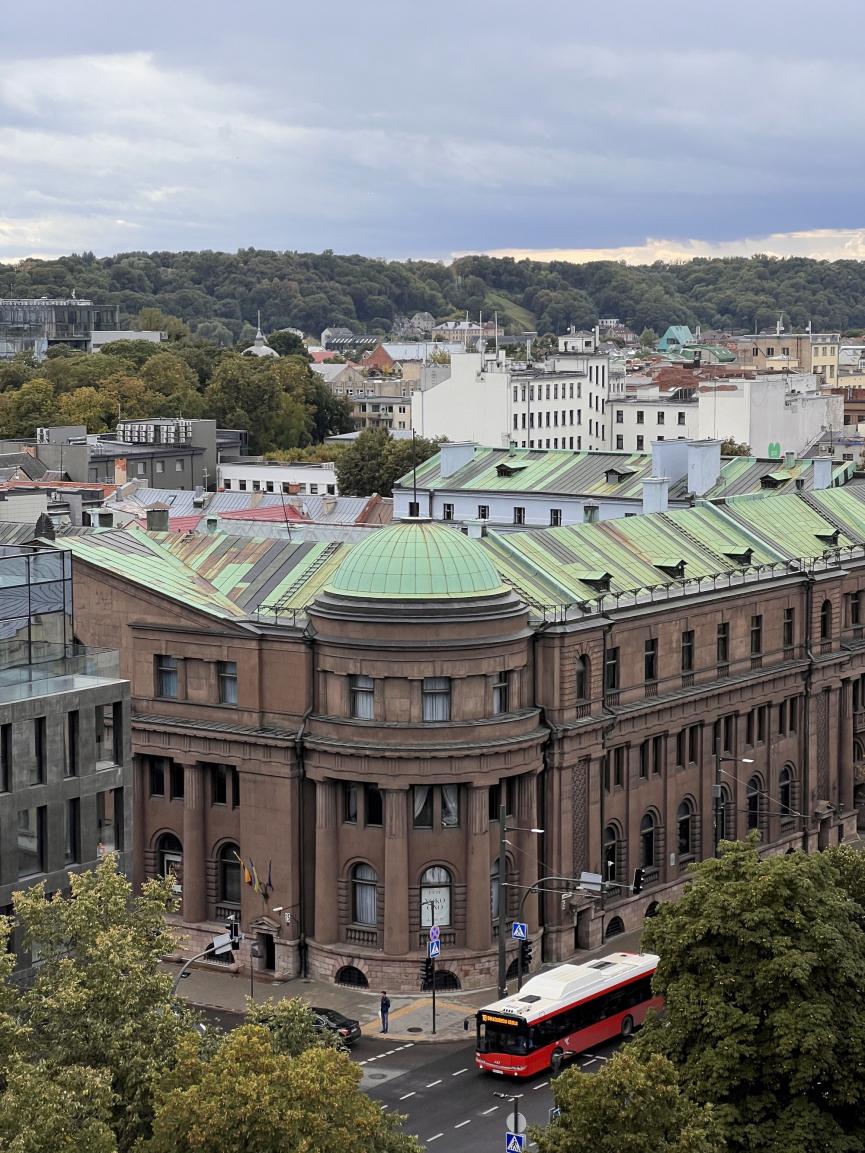 Photo by Kaunas IN

Terrace of the Christ’s the Resurrection Basilica
Žemaičių g. 31A

This interwar modernist church was completed and consecrated only after the restoration of Independence. The 360-degree view of Kaunas is beautiful even on a foggy morning! Reach the Basilica by one of Kaunas’ many staircases - the most picturesque are Kauko, with fountains at the bottom and top. Of course, you can also take the funicular. 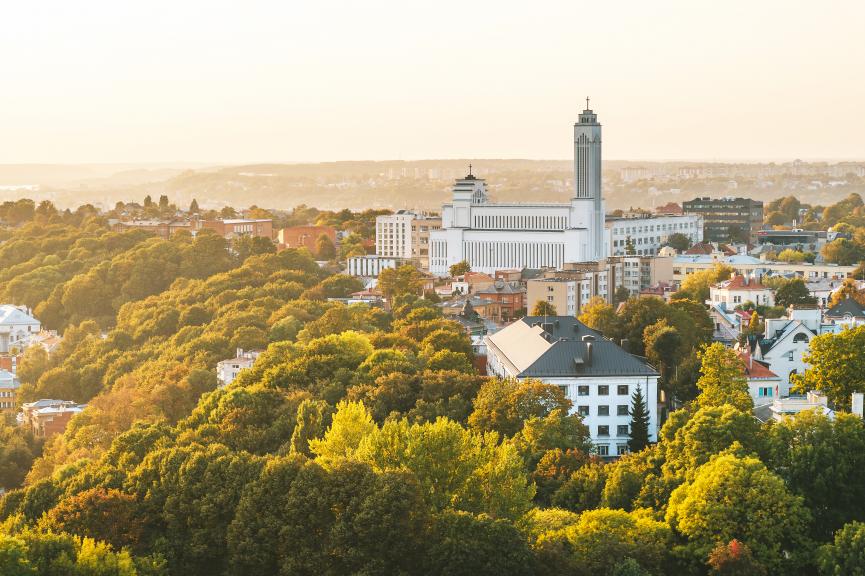 Recently officially opened after renovation works, the Oak Forest is one of the most impressive city forests in Europe. The centuries-old oak trees remind us of our Baltic origins and inspire long walks at any time of year. Autumn is the time to gather the colourful leaves, the acorns and maybe even make coffee from the latter.

The renovated S. Darius and S. Girėnas Stadium in Oak Grove will open in October. Get there early for the inaugural event and walk all the newly built paths! 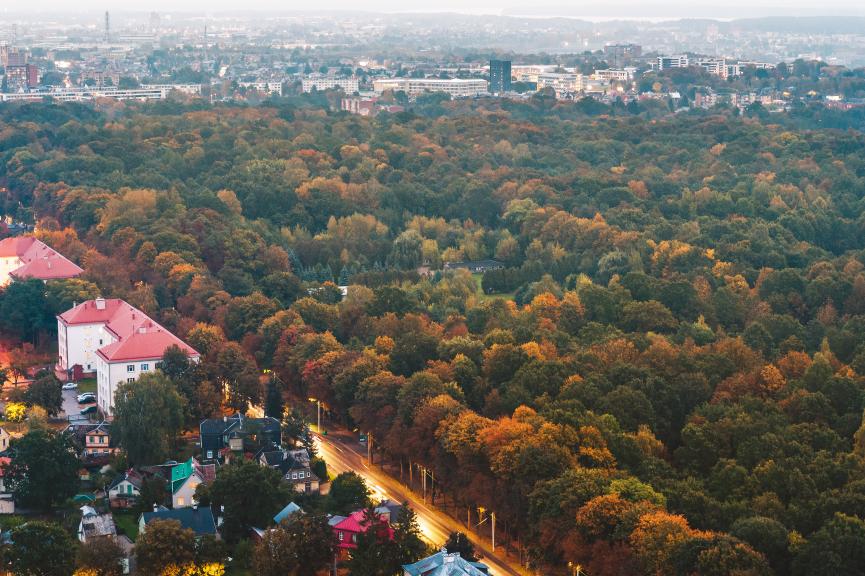 The park is named after the fence surrounding the Kaunas School of Art, for which a former student Vincas Grybas created the numerous owl sculptures. It is not just a simple green zone but a piece of the history of Kaunas Fortress. The Kaunas College of Arts has a gallery offering excellent exhibitions; some works of art can be found in the park. The hill overlooks the Old Town - the perspective has been immortalised many times on the canvas of painters. Here’s an insider tip - the best panorama awaits at the house-museum of sculptor Juozas Zikaras’ Be sure to book a tour. 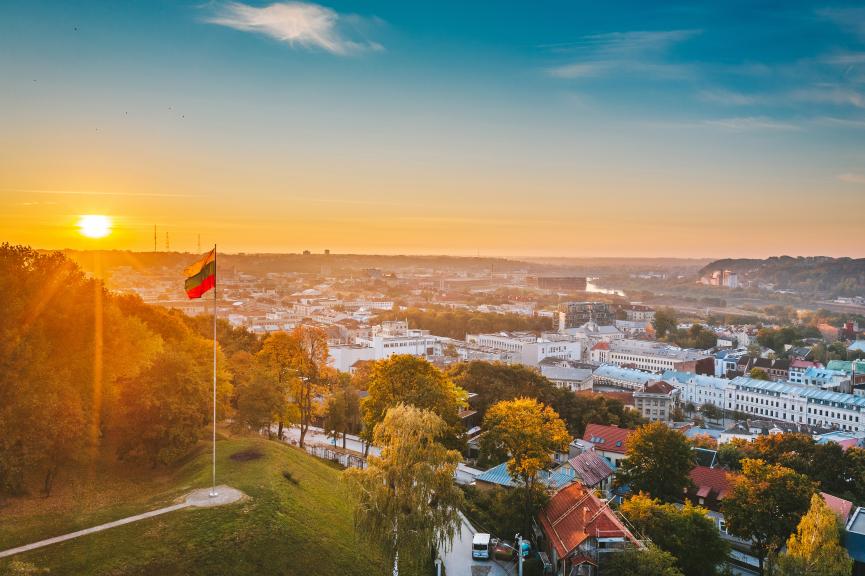 The Old Town is just a stone’s throw away from Owls Hill, and you can end your walk through the narrow streets in the heart of Kaunas, where two rivers meet. The confluence of the Nemunas and Neris rivers is said to be the perfect place to propose. Time seems to stand still here, and only the sun on the horizon and the vegetation on the river banks tell you what time of year it is. 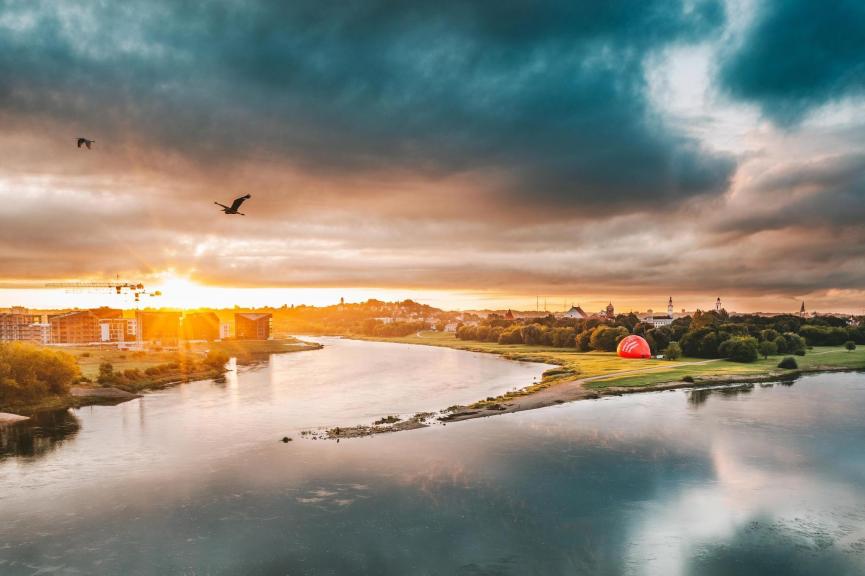 ‘Together we love Kaunas’ - this sign made of greenery on the other side of the Nemunas has been enchanting visitors to the old wharf in the Old Town for many years. Look up and admire the slopes of Aleksotas are touched by the autumn magic wand.

Time to cross the Vytautas the Great Bridge (did you know it used to take two weeks to cross it? Nemunas used to be the border between Russia and Prussia, which used different calendars) and climb up to the Aleksotas Observation Deck to look at the Old Town and other parts of Kaunas are. The most scenic way up is by funicular - dating back to the interwar period, it is the younger brother of the Žaliakalnis funicular. If you hear music while you’re there, don’t be surprised - the VMU Music academy, where future stars are being raised, is right behind the deck. 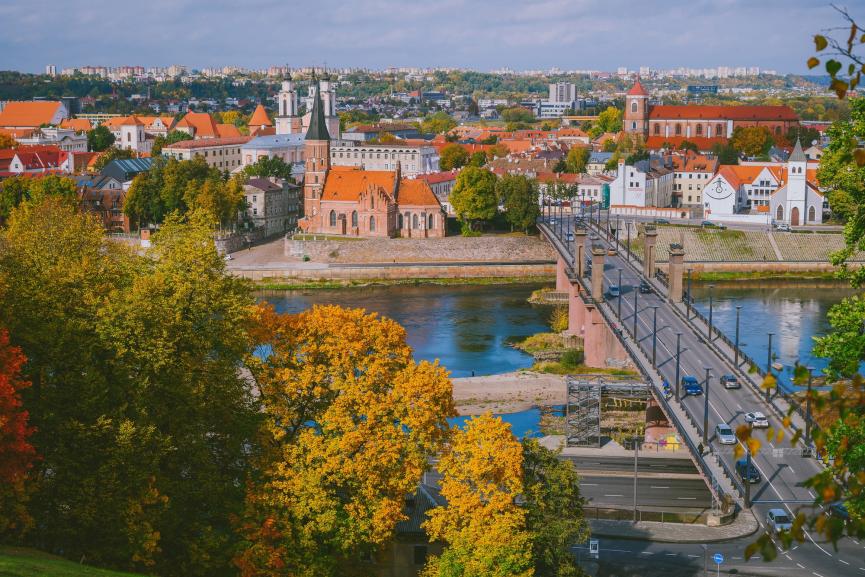 It would be wise to visit this botanical garden, which will celebrate its centenary in 2023, at least four times a year as each season gets underway. But more often is possible and recommended - the garden is cultivated so that new plants delight with their flowers, leaves and cones every week. And September is the time for dahlias. You’ll make an excellent picture for your mum, we promise.

... there is art, too! Photo by VMU Botanical Garden

We dare say you won’t find a more photogenic Baroque complex in our region. Pažaislis Monastery has been immortalised in the cinema on several occasions. After its ‘role’ in the HBO series Catherine the Great, it was awarded the best European film location. Who would argue with a distinguished jury? After your picture is taken here, don’t forget to take a stroll along the Kaunas Lagoon. It’s already too cold for a dip, but it’s always good weather for enjoying nature if you dress accordingly, right? 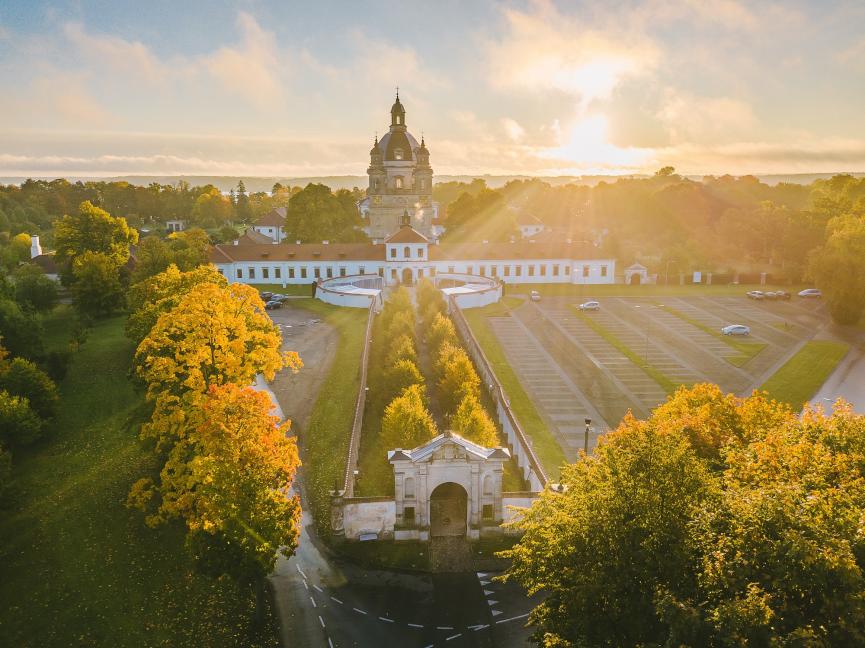 ... and now it’s time for the other side of Kaunas. At the very beginning of the old Žemaičių Road, which used to connect Kaunas and the seaside, just after climbing Milikoniai Hill, you will find a lookout with a view of Vilijampolė and Žaliakalnis. Until 2 October, an observation wheel is open, taking the romantic experience to even greater heights.

We end our route through places full of autumnal romance at a particular stop. The old Kaunas cemetery used to be here; today, it is reminded by the Orthodox Church of the Resurrection of Christ and Sobor of Annunciation of the Blessed Virgin. On the other corner of the park, you will see the picture-perfect only brick mosque in the Baltic States. As you wade through the fallen leaves of the trees, you’ll discover interesting street art and signs of remembrance. It’s most interesting after dark - and it’s not scary at all. 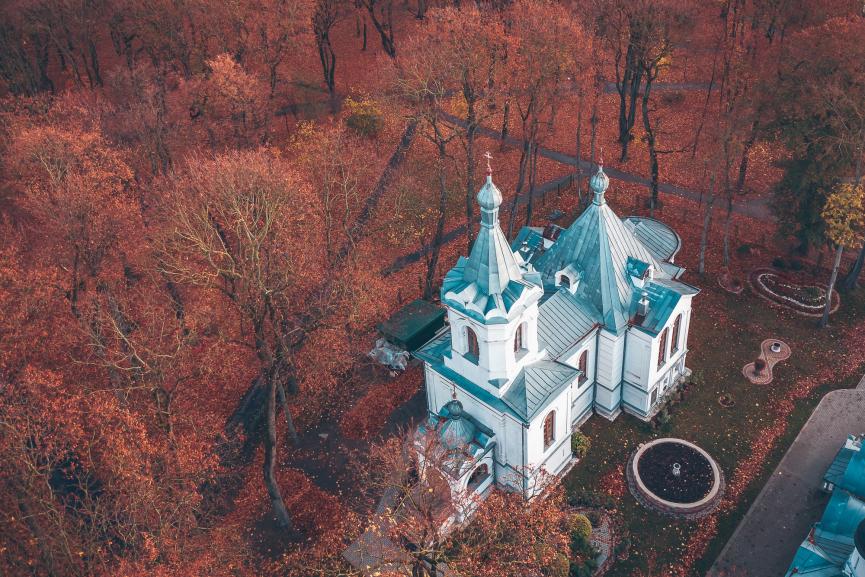 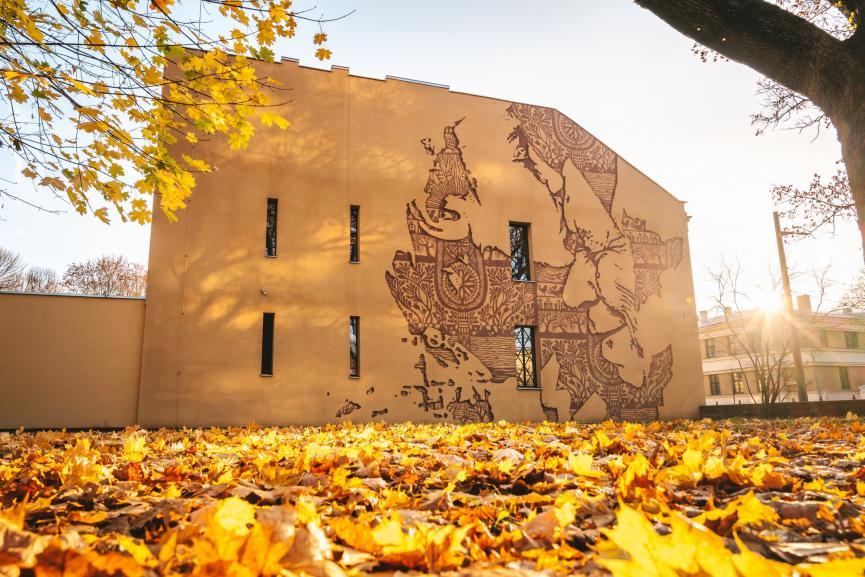