Visiting Kaunas this January? Fantastic – check out what the city’s cultural operators have planned for you. 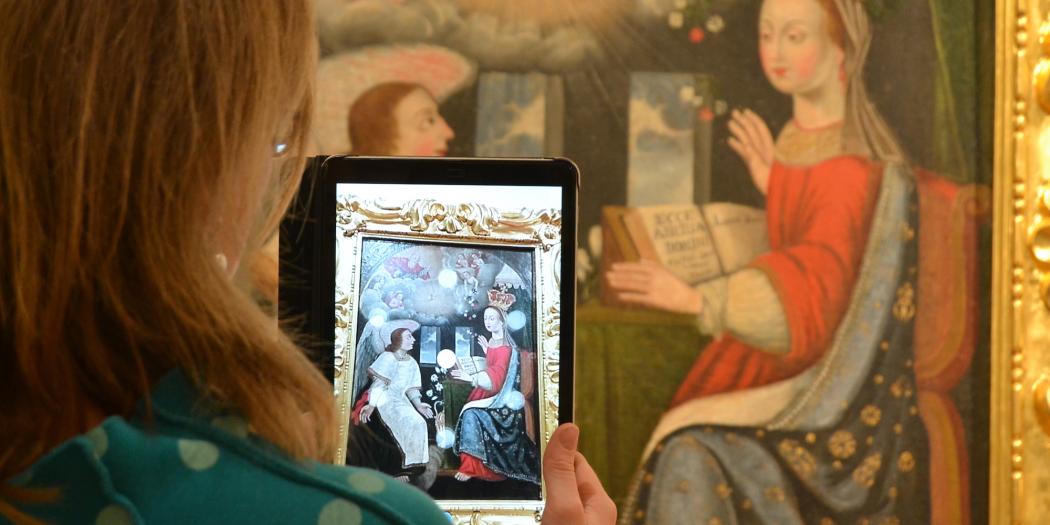 Happy New Year! The two weeks of global holidays are coming to an end, but we hope that doesn’t stop you from travelling. Visiting Kaunas this January? Fantastic – check out what the city’s cultural operators have planned for you.

“Ghetto”, a performance directed by Gintaras Varnas and based on a play by Joshua Sobol, was the highlight of the theatre’s 99th season. The play focuses on the experiences of the Jews of the Vilna Ghetto during Nazi occupation in World War II, as well as the story of the Jewish theatre inside the ghetto. Theatre became the source of strength and resistance. It’s a story about a collective fight for survival, both physical and spiritual. Varnas added a lot of documentary material to the work of Sobol. You’re now able to see it subtitled in English. Tickets. 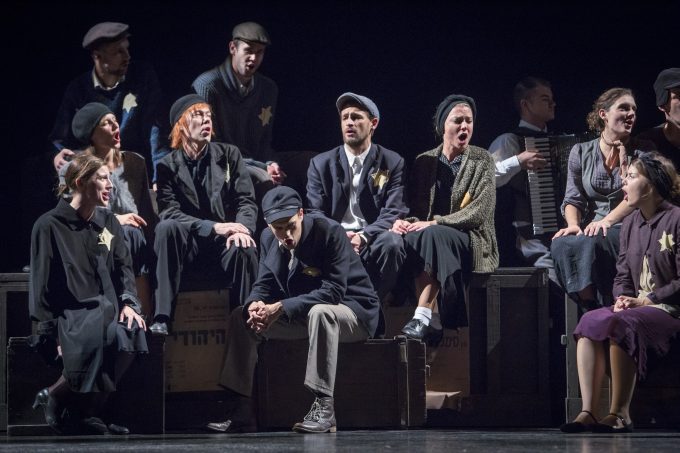 Once upon a time in the Eastern lands there lived a man who had a magical ring. Whoever wore the ring was followed by God’s grace and glory. The ring was always passed from one generation to another to the most beloved son in the family. Once, however, it ended up in the hands of a man who had three sons whom he loved equally. The man could not make up his mind to whom he should give the ring. Before his death, he went to see the jeweller and asked him to make two more such rings. Then he secretly gave a ring to each of his sons and passed away. When the sons saw that all of them had rings, they began quarrelling and arguing. Which ring is the real one? Which two are worthless copies? Who is destined to become the chosen one?  Three religions – Judaism, Christianity, Islam – even nowadays try to prove that only one of them is true and fair. “Nathan the Wise”, a utopian tale of the Age of Enlightenment (18th century), exalts the human mind and the power to make the world perfect and tries to convince us that three sons – three religions – can live in peace and harmony. Surtitled in English. Tickets.

Inspired by pianist Guoda Gedvilaitė, the concert series combines music, literature, art, and theater into one whole. It takes the listener to the 19th century, where composers, writers, actors, and artists meet in salons. Historical characters are embodied by today's professional musicians and young talents. Tickets.

The best-selling classical solo artist of today Andrea Bocelli will perform in Kaunas. The Italian superstar will please his fans with a spectacular program consisting of two parts – first classical part with all of the most famous operatic arias, and the second part with Maestro Bocelli’s the most popular hits. Tickets.

In this live concert, members of the local reggae band Ministry Of Echology will present their newly released third studio album titled “Mixed feelings”. Friends of the band Kala Sound System are joining this festive album launch party to take care of the concert’s sound quality and an energetic dance set afterwards. Tickets. 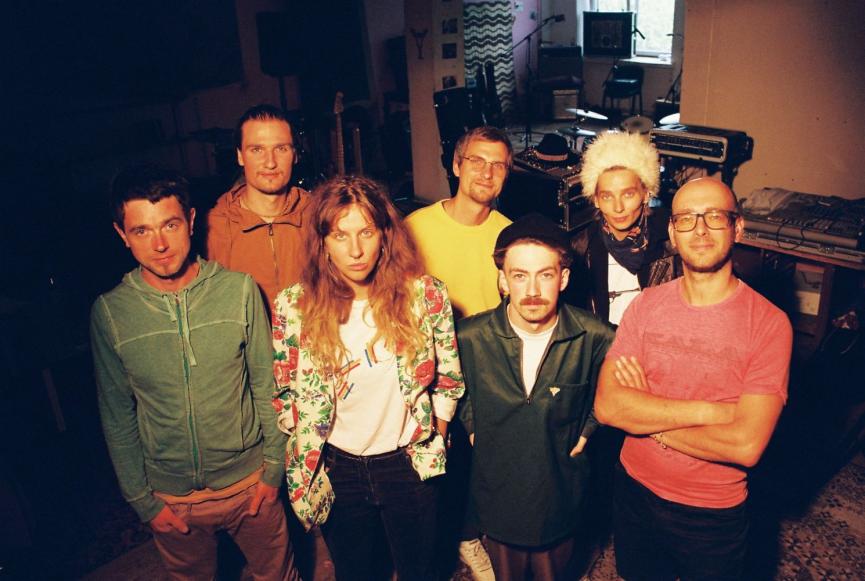 Kaunas Artists’ House presents project Vortex Temporum by Vilnius contemporary music ensemble Synaesthesis. In this concert, the ensemble will perform a piece created by a French composer and a star of spectral music, Gerard Grisey. “To hear Grisey's music is to have adventures in the stuff of sound that will change your ears forever. Raw and perfected at the same time, rigorously structured yet full of savage energy – this is the composer’s magnum opus: a three-movement thrilling journey with “Vortex Temporum” for piano, strings, and wind.” – once wrote “The Guardian” about one of the most influential artists of the 20th century.

Kaunas City Symphony Orchestra together with conductor Vilmantas Kaliūnas invites everyone to dive into the world of cinema. In the concert you will hear music from Titanic, Robin Hood, Spider-Man, King Kong, Mission Impossible, Jurassic Park etc. While listening to those easily recognisable melodies you will also have the opportunity to enjoy special visual projections tailored to fit each score. The fusion of music and visuals will be complemented with short, yet unique, perhaps unheard of stories about each film and its soundtrack. Tickets.

400 paper-men clung together into an integral human, walking bravely into the city on a community mission. Kaunas Picture Gallery is inviting you to celebrate the first step of this human‘s journey. Origami paper-men were folded by the volunteers from “Women‘s Helpline” and elder women club “PRIEmenė“, along with the participants of an open folding workshop. At September and October gatherings in an exhibition “In Memory of Paper”, the paper became a social medium, a challenge that led to being together, sharing experiences and emotions. The photographic documentation of the workshops, their thoughts and paper-men turned into an exhibition of the “Gallery without Walls“. 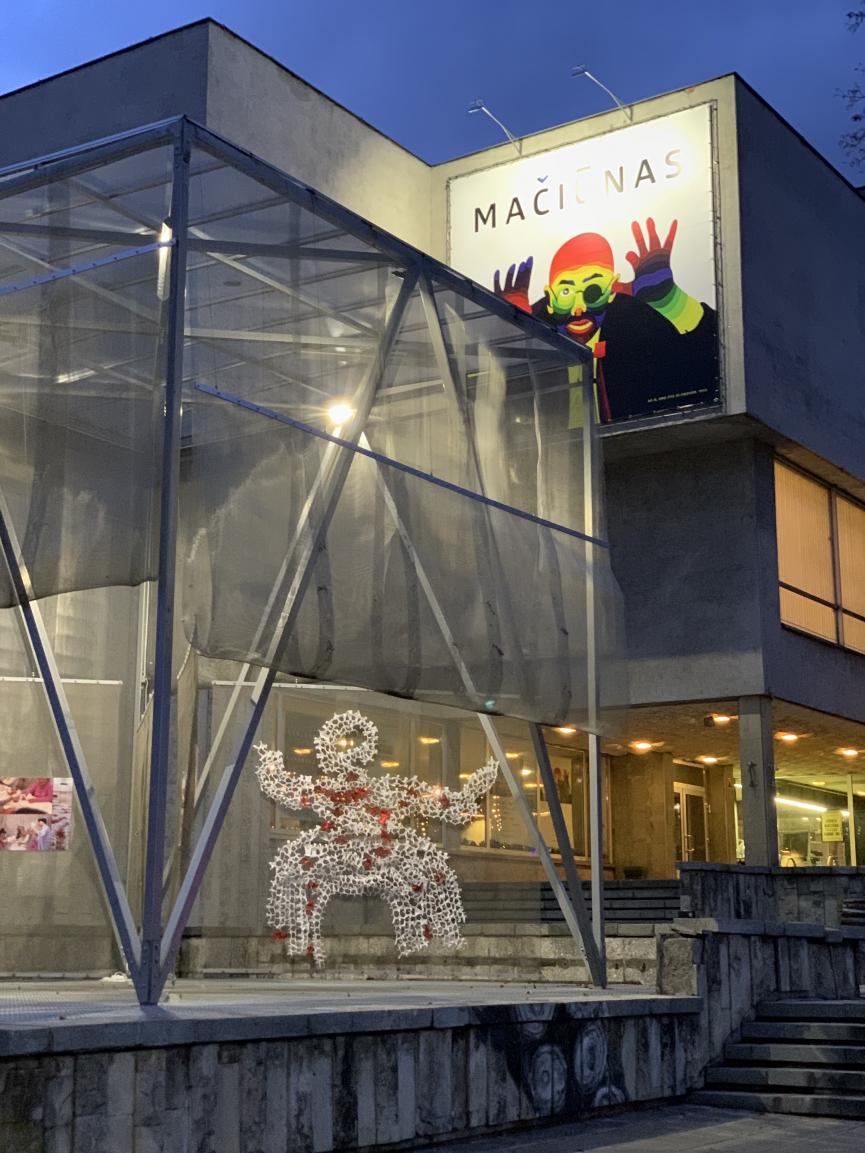 The life and creative history of Ladislas Starevich, an entomology fanatic and pioneer of puppet animation, stretches across several countries and seems like an immersive, enigmatic movie. The various written forms of his name and frequent misrepresentations of his biographical facts intrigue and inspire to get to know L. Starevich better. Born in Moscow, he spent his childhood in Kaunas with his grandmother. His lifelong interest in the insect world and photography, as well as later on in the cinema, has developed right here. Through his bold filmmaking ideas, L. Starevich created unusual methodologies to tell the story, something without which today's cinema wouldn't be the same – stop-motion technique and puppet animation. All this happened in Kaunas, more precisely in Kaunas City Museum! The inventor created his first films while working in a nature department of what was then called Kaunas City Science-Industrial Museum. At this exhibition, you can see L. Starevich’s photographs, drawings and paintings, as well as footage from his films. 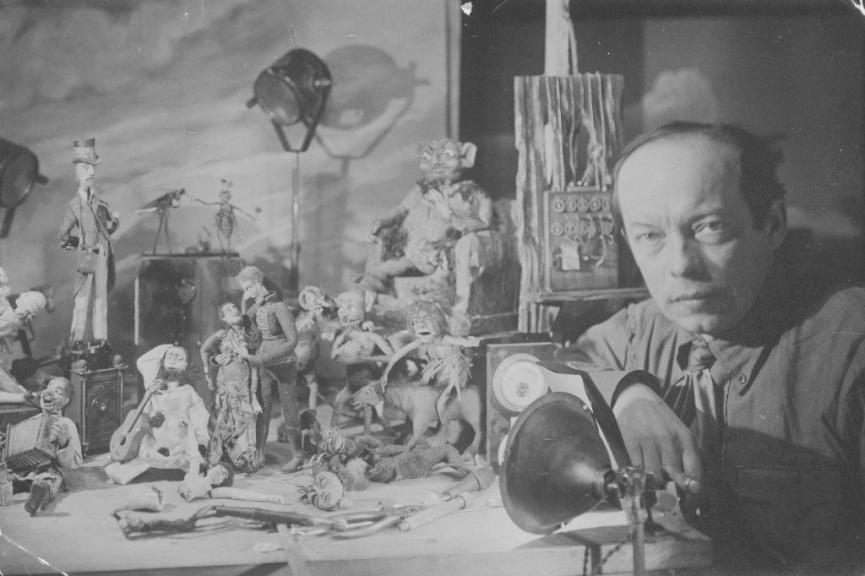 L. Starevich in his studio. Photo from The National Digital Archives of Poland

The path of the iconic Kaunas sculptor Robert Antinis is marked by many stages of his creative work. His creative life began from working with his father, the famous sculptor Robert Antinis (the Elder). Later (since 1980) the artist turned towards the topics "About the Blind" and "Measures for Sighting". Other topics that occupy a prominent place in his works are: “Epitaphs” and “Ephemeras”. After them comes the “Eraser”, related to the concepts of process and interactivity. Here, the artist tries to create and exhibit the relationship between the perceiver and the presented "characters", rather than objects. In the latest exhibition, “Act: Eraser”, the main character is Eraser itself. Here it is transformed into an actor playing an act of his endless possibilities for reincarnation. The exhibit consists of Robertas’ latest works, shapes and objects talking about various unexpected eraser-type situations. 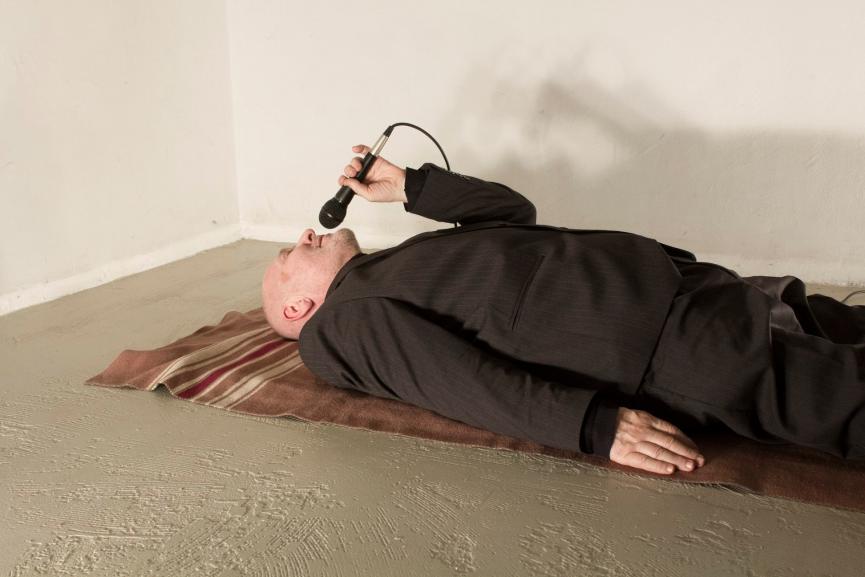 A moment from the exhibition’s opening. Organisers’ photo

An exhibition of this kind, which allows us to interactively experience the artworks from the 17th-20th centuries with the help of innovative technologies, is happening in Lithuania for the first time. In this exhibition, you can see 32 artworks from the church art collection of Kaunas Archdiocese Museum. Only a few of them have been known to the public until now, and most of the exhibition consists of newly restored works, which will be shown for the first time. The old works were revived by the animator Gasparas Aleksa, who created visualizations that individually reveal the contents of each exhibit. 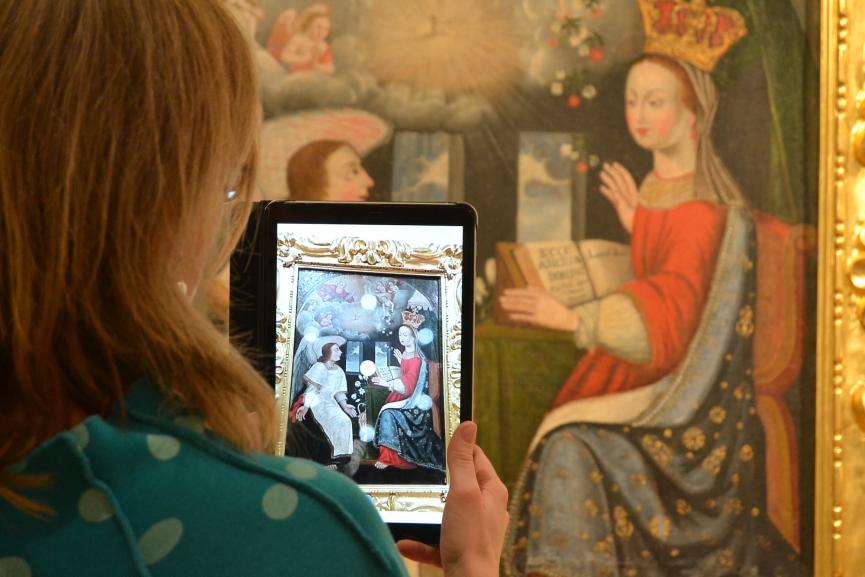 Žilvinas was born in 1989. A few years later, after watching a ton of cartoons, he picked up a felt tip pen and started drawing. And he still does that to this day. He has been creating illustrated posters since 2014 and has taken care of almost all the concert posters and album covers for Vilnius-based rock band "Arklio Galia". Most often, the author's work is dominated by such inexhaustible artistic motifs as creepiness, vulgarity, deformity, and chaos. The exhibition will feature concert posters and several other illustrations. “Godo” is, by the way, one of the cosiest spots in downtown Kaunas! 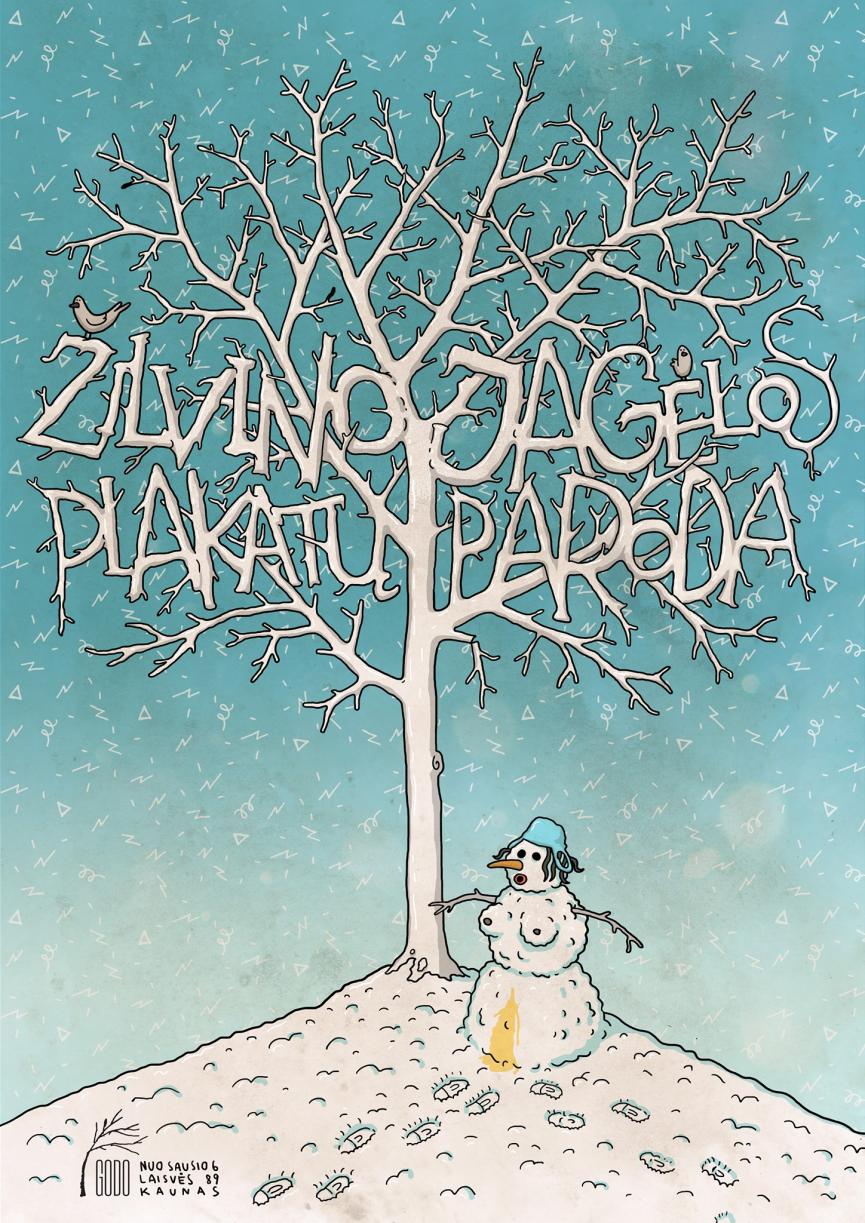 The first part of the EuroLeague season has not been easy for Lithuania's most-awarded team, but we finished 2019 with a nice victory in Munich. This means we have to start the New Year in the best possible shape. Are you with us? (Sold out).

After a 22-day break, EuroLeague basketball is heading home. Žalgirio Arena will be hosting Berlin ALBA Berlin with the Lithuanian star Rokas Giedraitis leading the opponent team. Let’s come together and greet Žalgiris with ferocious and united support! Tickets. 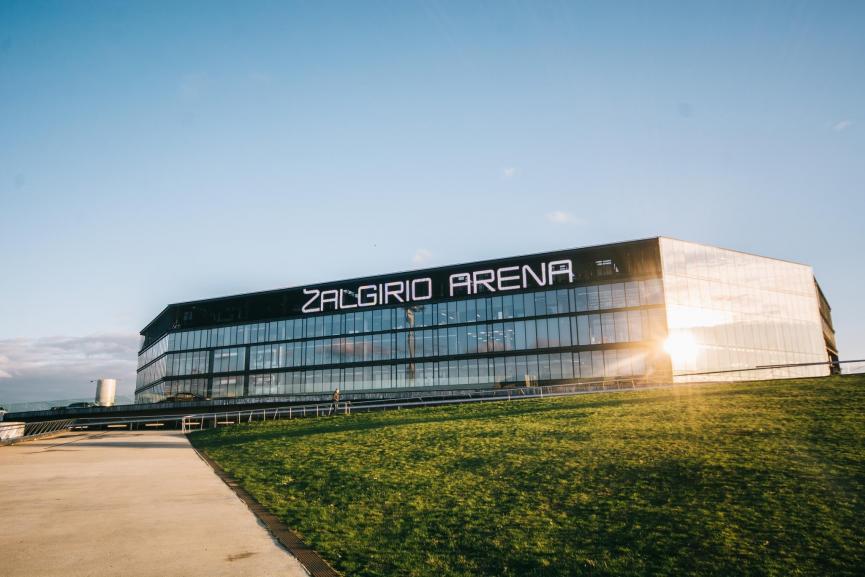 Years come and go but Slam in Kaunas Artists' House is not going anywhere. Same as always but never the same. It is always open to spoken word – both of novice lyricists and experienced slammers. Same rules remain. If you have any questions, please contact asta@kmn.lt.