From Oldest to Largest: The Churches of Kaunas

The 70-m tall symbol of independence, the candle shrine and other stories. 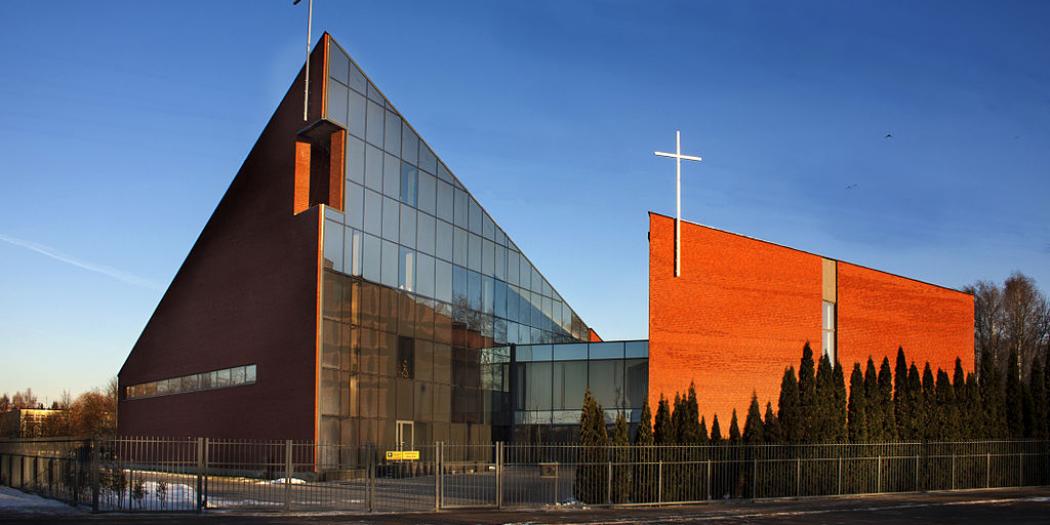 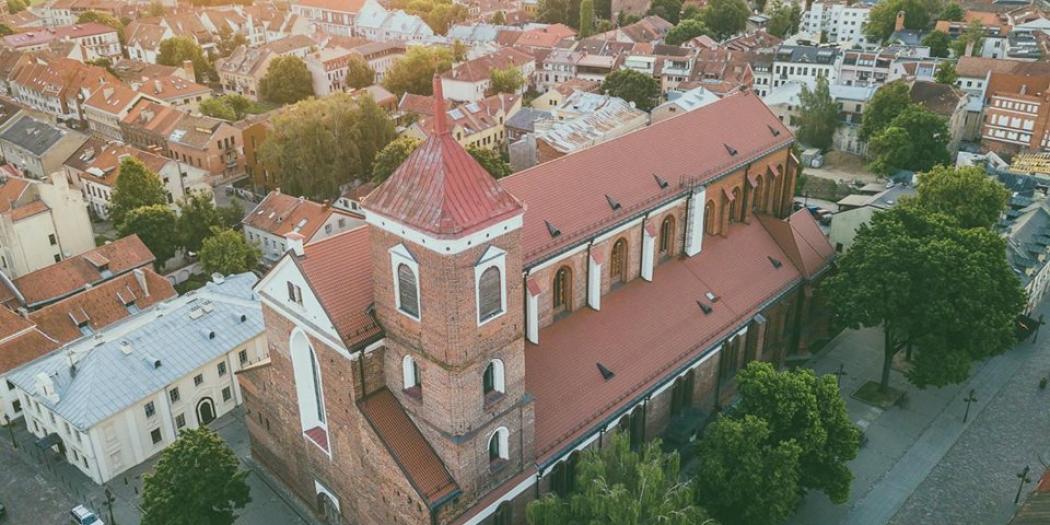 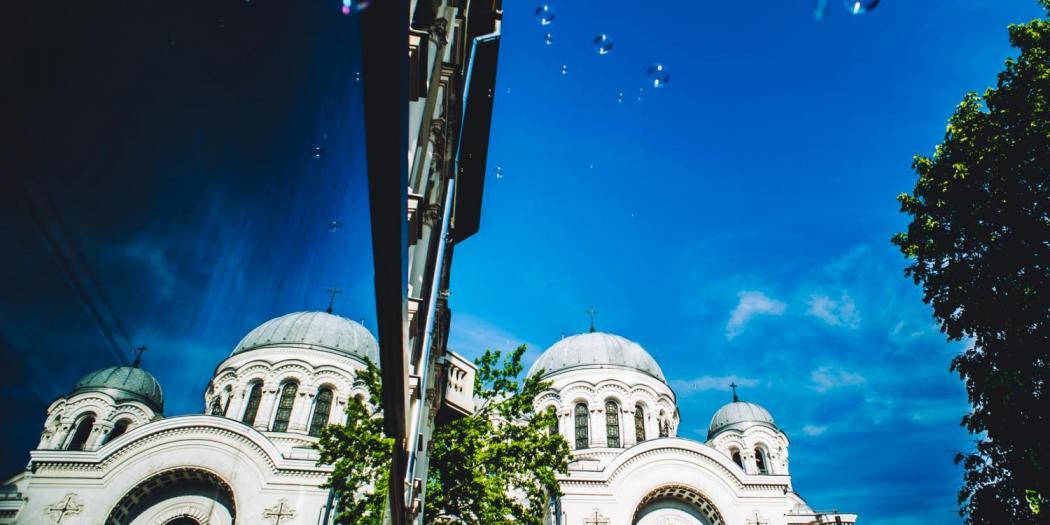 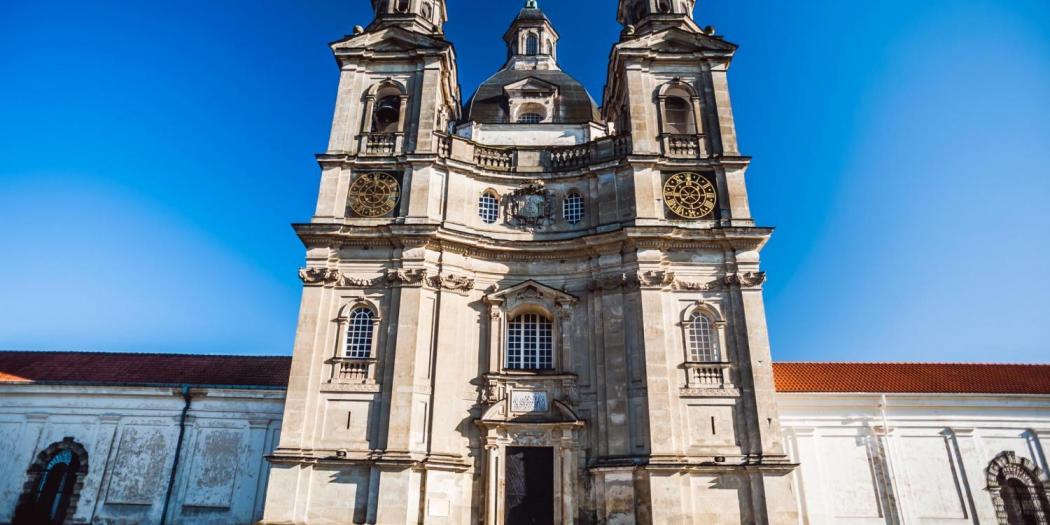 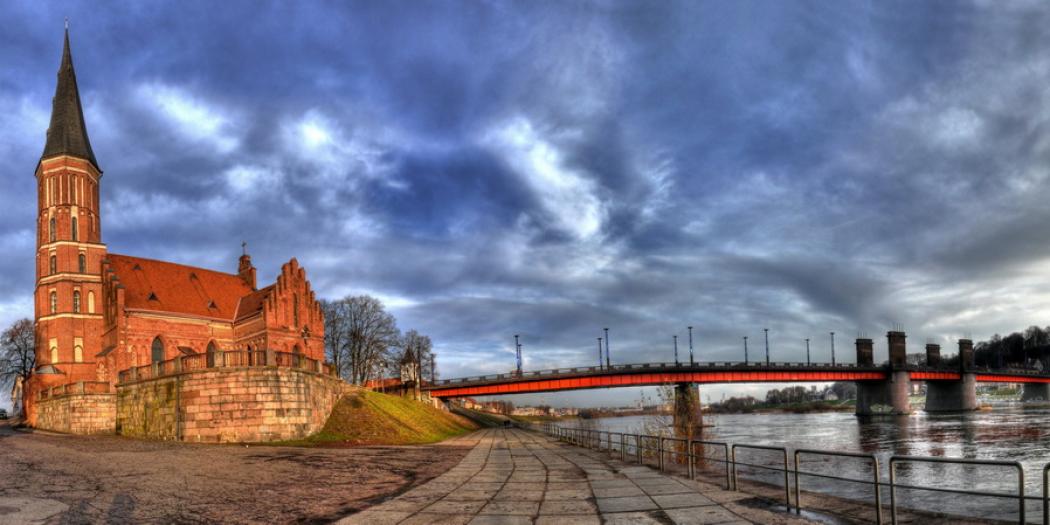 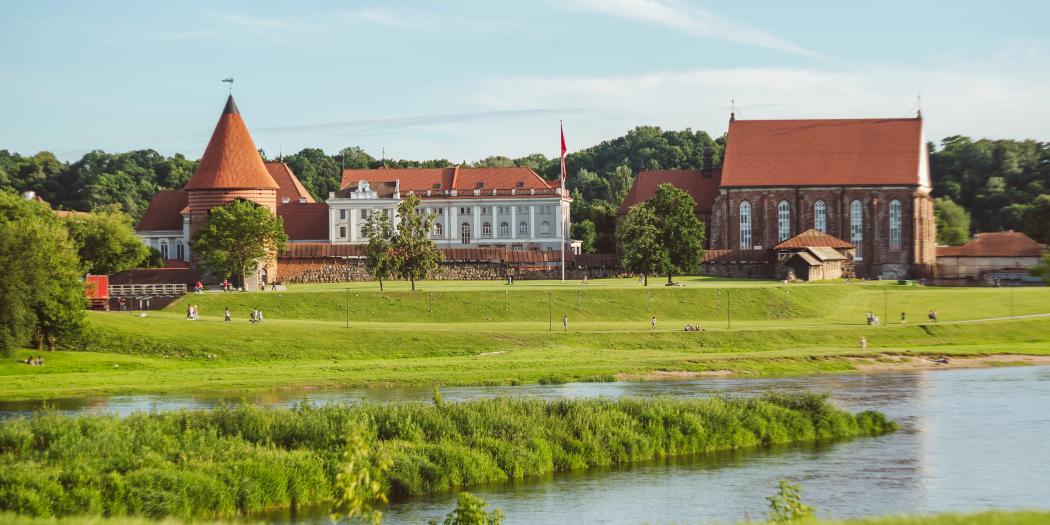 On September 22-23, 2018, Pope Francis will make a state visit to Lithuania at the invitation of President Dalia Grybauskaitė and the Catholic Church. The Holy Father will hold a mass in Kaunas during his stay in Lithuania; his visit to our city is one of the major events in 2018. Therefore, we’ve decided to post a few stories about the history and today of Catholicism and religion in general in Kaunas. Let’s start with the Catholic churches!

Built around 1400, the Church of the Assumption of the Holy Virgin Mary, better known as Church of Vytautas the Great (Aleksoto g. 3), is considered the oldest in Kaunas. It was funded by Vytautas the Great, the ruler of Lithuania, and designated for Franciscan monks and foreign merchants. Its cross-shaped layout is unique for Gothic churches in Lithuania. Located on the bank of Nemunas, the biggest river in Lithuania, the church was flooded numerous times. In 1812, it was burned down by troops of Napoleon. In the late 19th century, it was rebuilt as an Orthodox church; the building was also used as barracks and warehouse. It was returned to the Catholic community 99 years ago.

Church of Vytautas the Great © Kaunas IN

The largest Gothic church in Kaunas and Lithuania is the Cathedral Basilica of apostles St. Peter and St. Paul (Vilniaus g. 1) which is located at the beginning of Vilniaus street. It was first mentioned in 1413, but the construction works were only finished a couple of hundred years later. The present shape of the basilica, however, dates back to 1880 – like many other churches in the country, this one was destroyed quite a few times. Today, it’s one of the most important Catholic churches in Kaunas. 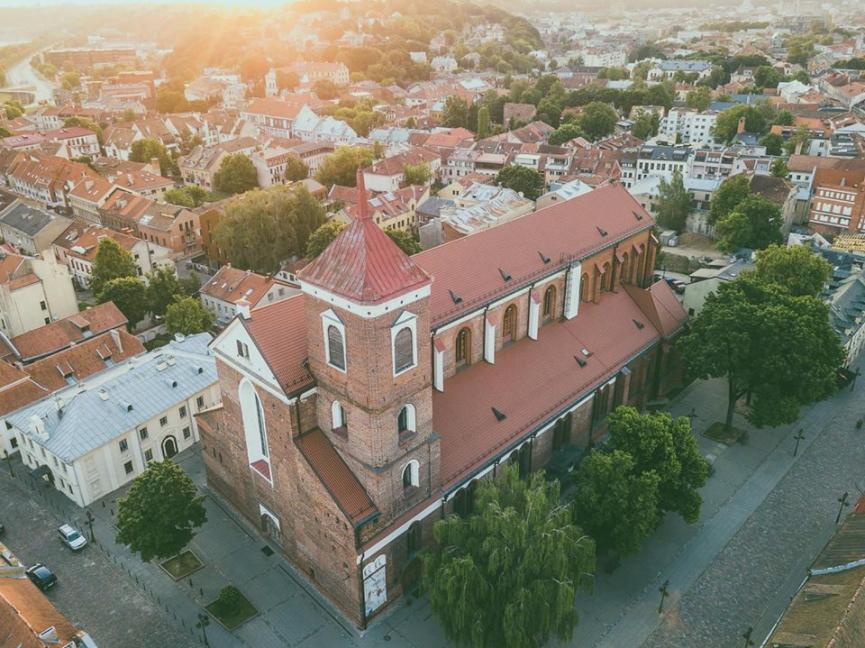 Cathedral Basilica of apostles St. Peter and St. Paul. Photo by A. Aleksandravičius

Another prominent example of Gothic architecture is the St. George the Martyr Church (Papilio g. 7) located near the Kaunas Castle. Heavily damaged during the Napoleonic wars and used as a warehouse during the Soviet occupation, the grandeur building finally received the attention it had deserved in 2009 when the reconstruction work started. The Bernardine Monastery is located near the church. 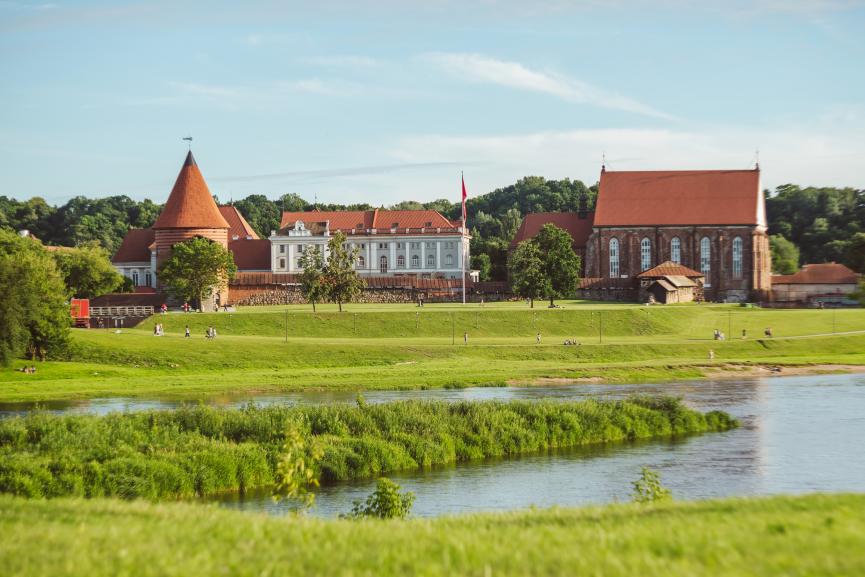 Kaunas Castle and St. George the Martyr Church. Photo by A. Aleksandravičius

One church in Kaunas can be visited 24/7 – it’s the Blessed Sacrament Church (Vilniaus g. 31) located right by the underground passage of Birštono street. Finished in 1690, the baroque church was converted into a cinema during the Soviet occupation – in fact, it was THE place for arthouse movie fans. The extraordinary stained glass from the church which is finally undergoing reconstruction can now be seen at the National M. K. Čiurlionis Museum of Art. 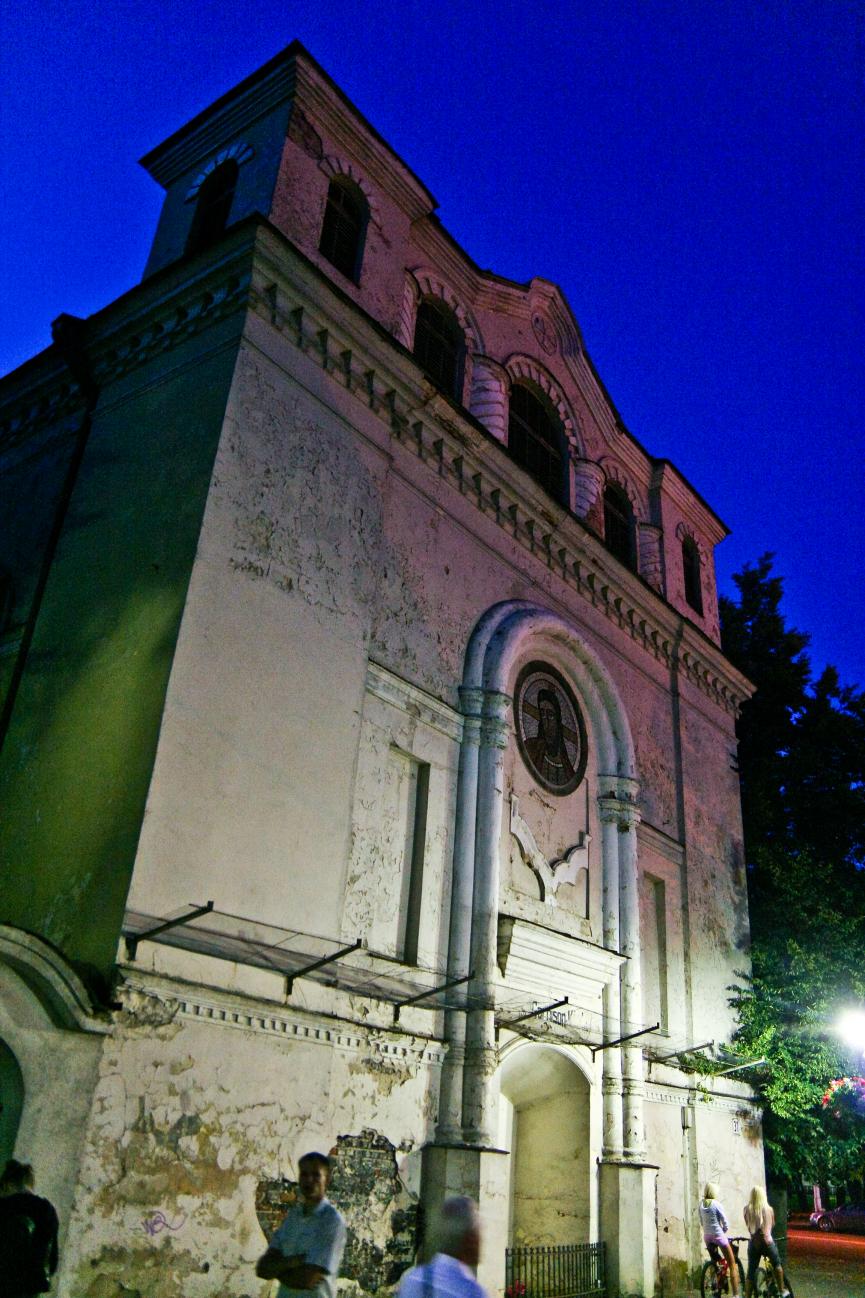 Those who believe in the power of candlelight must visit the little Church of St. Gertrude (Laisvės al. 101B) hidden in one of the courtyards of Laisvės alėja. Built in the 15th century, it’s one of the oldest brick Gothic buildings in Lithuania. During the Soviet occupation, in the 1980s, a new building was designed to be built in the church (it was used as a drug warehouse at the time) site. The community of Kaunasians, led by young architects, protested against the plans and they were cancelled. It was one of the events that inspired the pro-independence movement in Lithuania. Today, the church is famous for the hundreds of candles that can be observed from the outside. The sight, especially when it’s dark, is extraordinary. 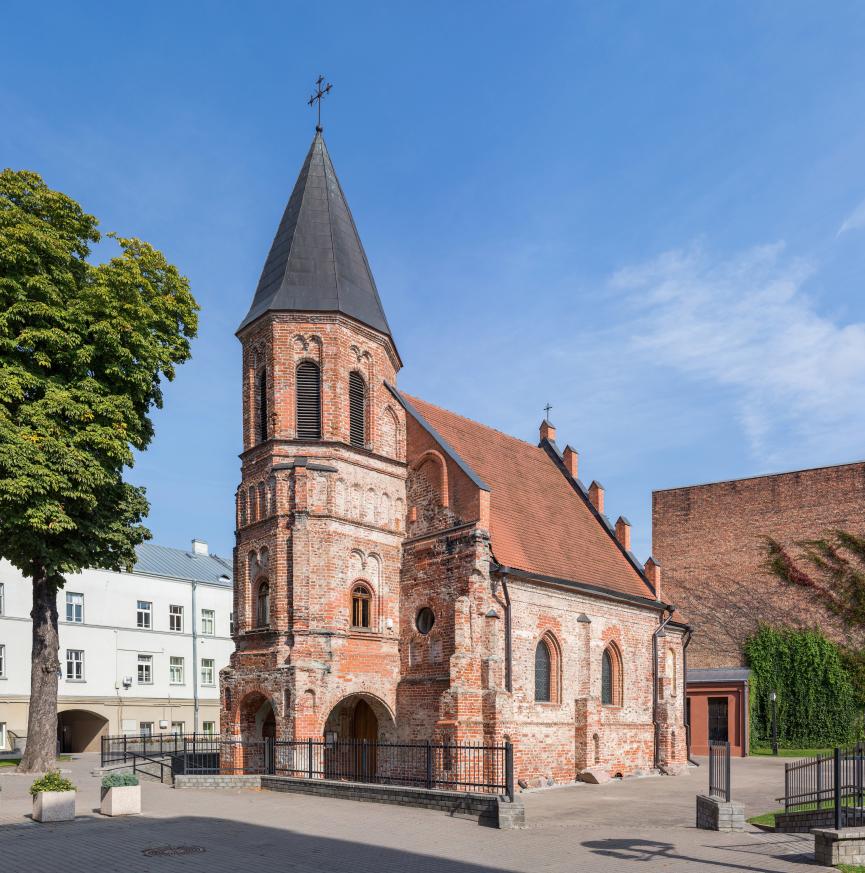 The Church of the Visitation of the Blessed Virgin Mary, together with the Pažaislis monastery ensemble (T. Masiulio g. 31), is considered a gem of late baroque architecture and is one of the most visited spots in Kaunas. Designed and decorated by Italian masters, it was opened in the 18th century. In the 19th century, it was converted into an Orthodox church. During the First world war, the premises were used for healing wounded German soldiers. Later, the monastery complex was used for archives and even a psychiatric hospital. Today, the monastery is taken care of by the Sisters of Saint Casimir. The Pažaislis music festival takes place in the monastery; part of it is used by an upscale hospitality complex Monte Pacis. 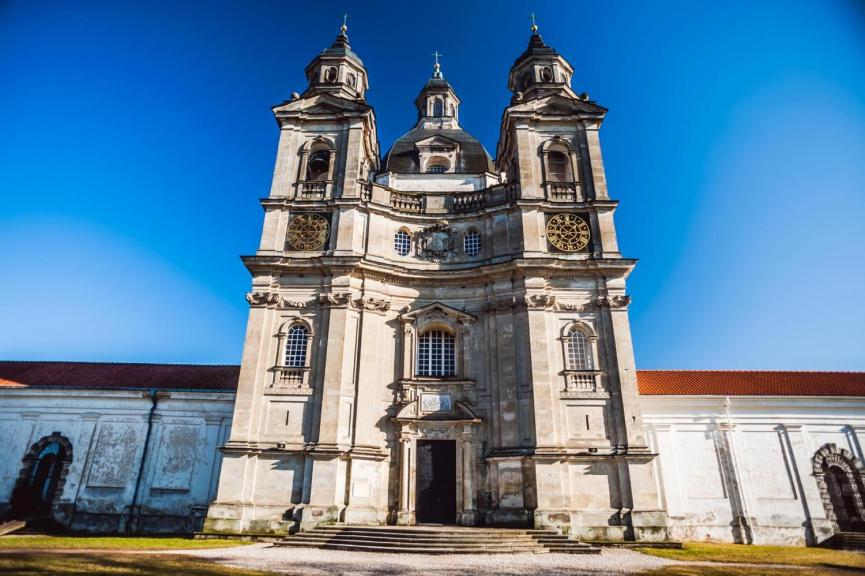 Pažaislis. Photo by A. Aleksandravičius

Soboras, officially called the St. Michael the Archangel Church (Nepriklausomybės a. 14), is often a topic for discussion when talking about the importance and genesis of city symbols. The building was used as an art gallery during the Soviet occupation; it was initially built as an Orthodox cathedral in 1895. It was first given to the Roman Catholic Community in the interwar period; many people, however, were sceptical about this and some even offered to demolish it. Today it serves as a Catholic church and is one of the most photographed buildings in Kaunas. 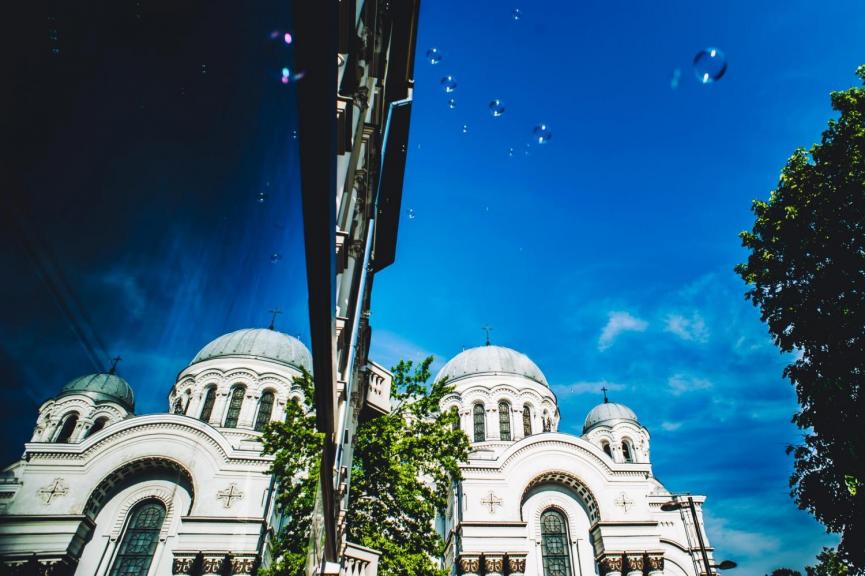 St. Michael the Archangel Church. Photo by A. Aleksandravičius

Today, the 70-m tall white Christ’s Resurrection Basilica (Žemaičių g. 31A) is one of the best-recognized symbols of Kaunas and the largest monumental church in the Baltics. Its history almost ideally coincides with the history of the Lithuanian nation in the 20th century, at the same time, it seems that the prolonged construction of this symbol of independent and robust Lithuania gives sense to its purpose. The construction process was interrupted by the Soviet occupation (almost half a century the church operated as a radio engineering factory). The strength of the church consists of many people’s efforts and small details. The impressive fact is that the Latvian-born architect Karolis Reisonas had converted to Catholicism for this project. When visiting the church, if the weather permits, don’t forget to climb on the terrace to experience a 360 view of Kaunas. 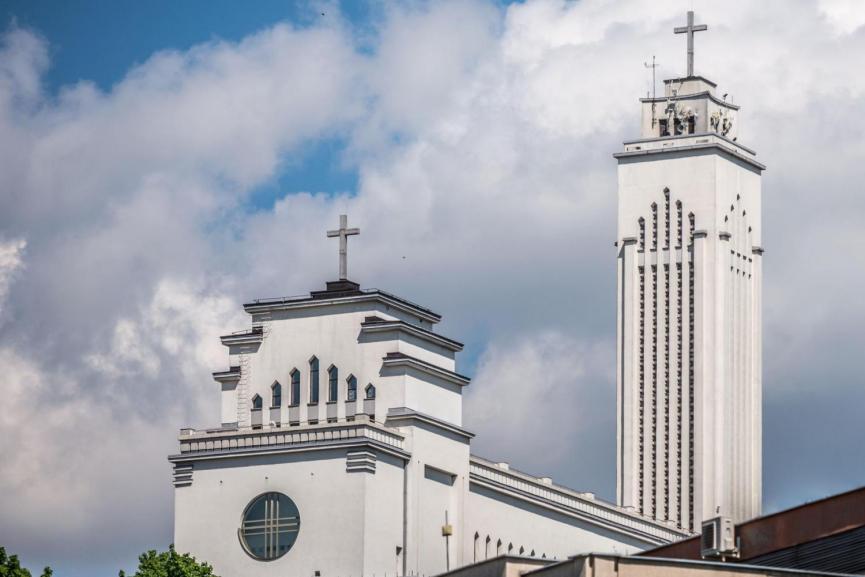 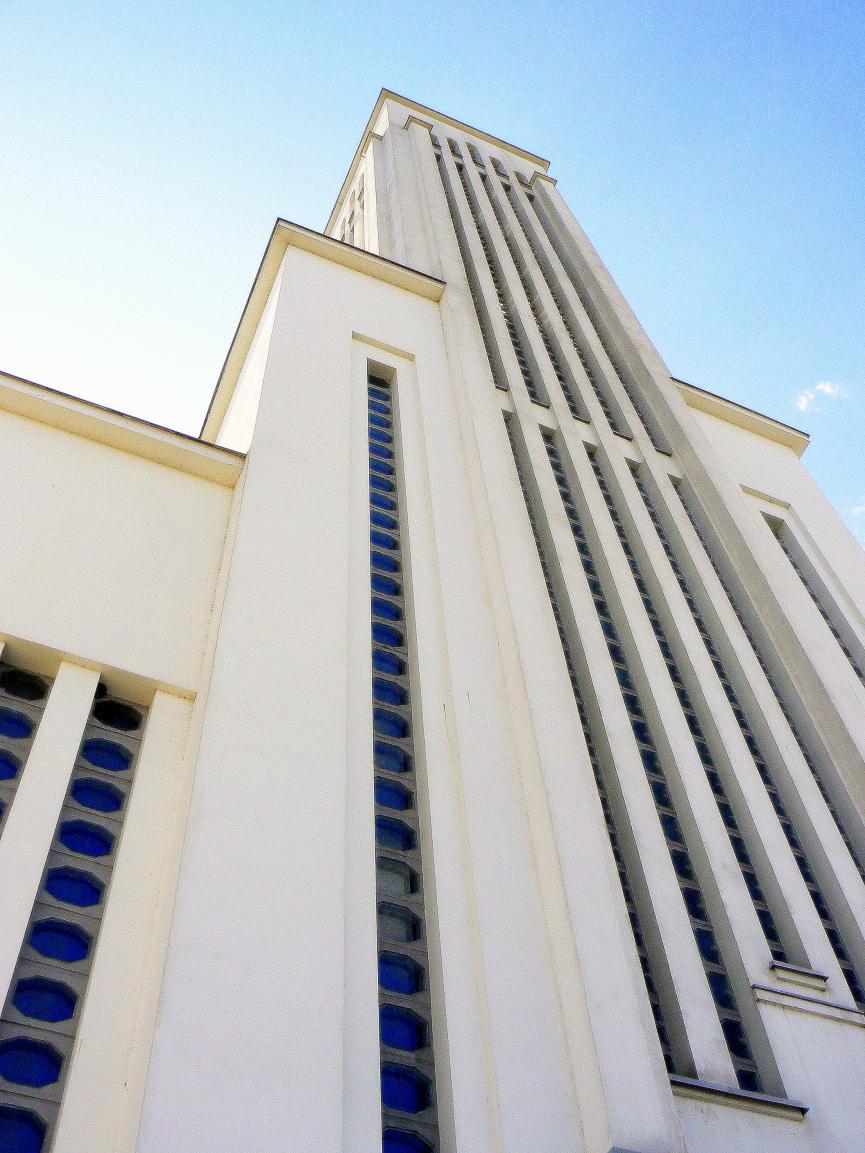 Reisonas also designed the Evangelical and Reformed Church (E. Ožeškienės g. 41). Climbing up the Savanorių mountain, when the trees are still bare, you can notice how similar these creations of the same architect are. This one, by the way, as also unfinished before the occupation. This church containing a canteen and a sports hall doesn’t get the same attention as the Resurrection Church, but it is promised that the building will be returned to the parish’s hands.

Even though modernist architecture prevailed at the time, not so many churches of this style were built during the First Republic. Therefore, the Church of the Most Sacred Heart of Jesus (A. Juozapavičiaus pr. 60) in Šančiai, designed by Algirdas Šalkauskis, Adolfas Netyksa and Pranas Markūnas, can be called the little cousin of Christ’s Resurrection Church. The roof of the building is one of the first examples of thin-walled reinforced concrete shell construction in our country. The modernist church is decorated with the fresco Angels created by the famous Lithuanian scenographer Liudas Truikys. Stasys Ušinskas designed the stained glass of the rear windows (we mentioned the artist in one of our recent posts!) after the war. 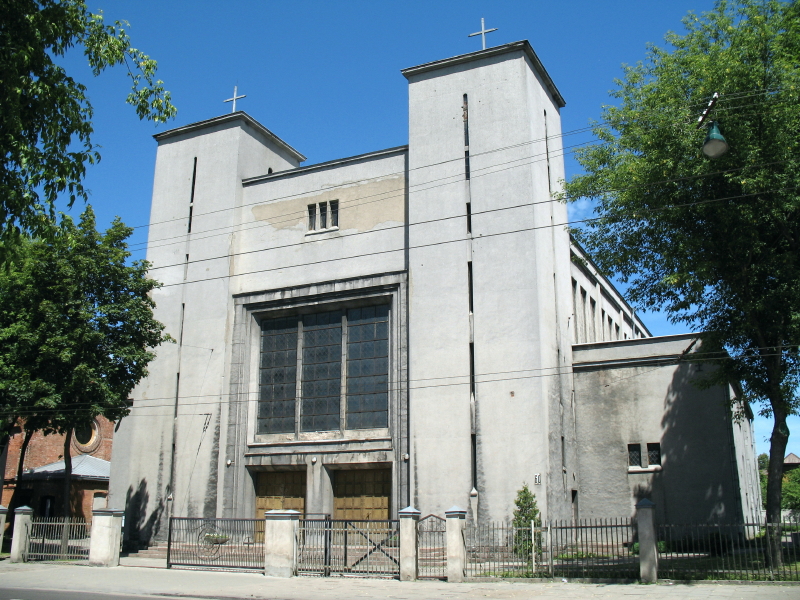 Church of the Most Sacred Heart of Jesus. Photo by Creative [GFDL or CC-BY-SA-3.0], from Wikimedia Commons

Another modernist church is located in Aleksotas and is in fact much younger than the abovementioned ones. One of the most talented contemporary architects Algimantas Kančas (1954-2016) designed the extraordinarily shaped St. Casimir’s church (Antakalnio g. 35) in 1997. He was also the author of the Good Shepherd Church in Dainava (V. Krėvės pr. 95A), built in 2008. 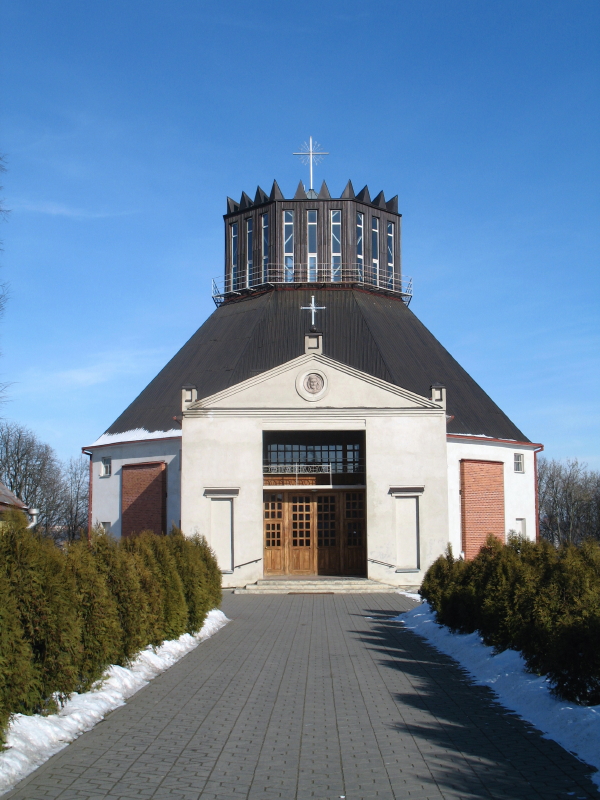 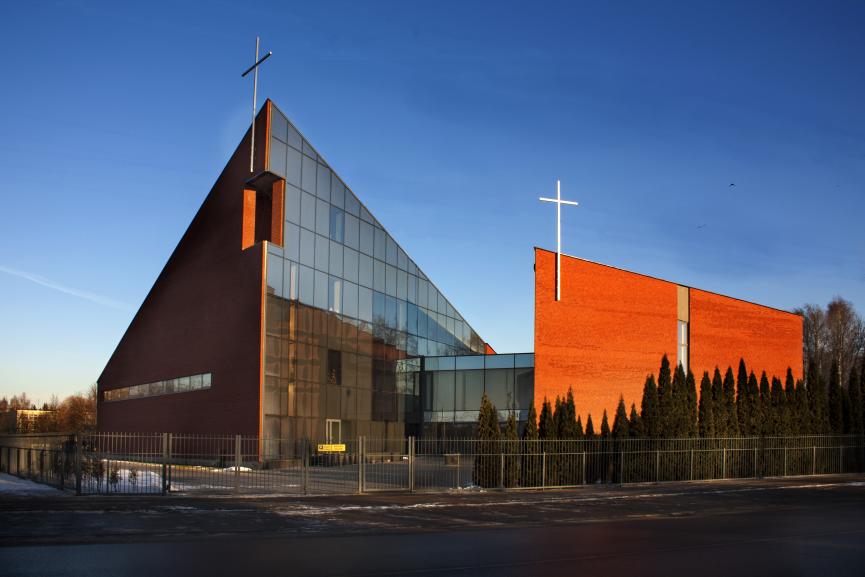 A church that hasn’t been built yet must also be mentioned in this article. It’s the St. John Paul II Church that will soon rise in the Šilainiai microdistrict. Dedicated to the Centennial of Restored Lithuania, the church will also serve as a symbolic monument to freedom. You’re welcome to donate to the building of the church. Contact the parish on Facebook if you’re up for that! 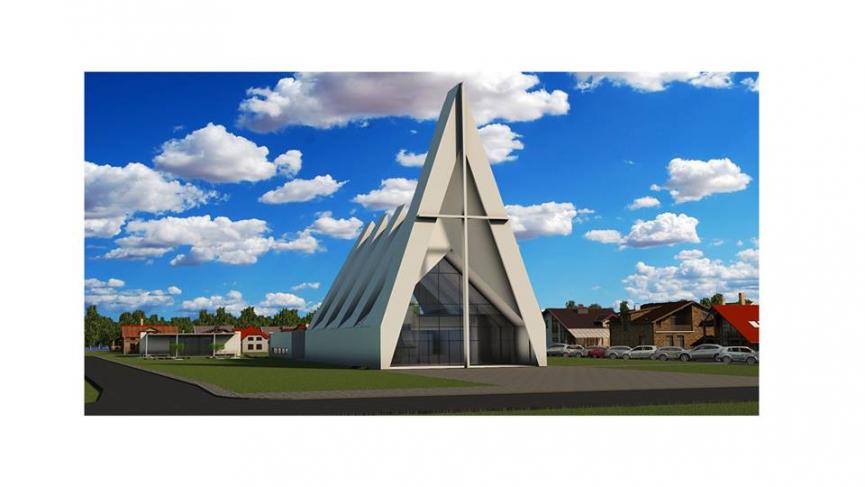 Of course, these are not the only churches in Kaunas. Did you know, for example, that there’s also the Small Christ’s Resurrection Church in Žaliakalnis? What about other confessions? Let’s get back to the topic sooner than later.