For those currently in Kaunas or arriving in our city for the Easter weekend, we’ve compiled a few ideas and tips for having a kaunastic time.

For those currently in Kaunas or arriving in our city for the Easter weekend, we’ve compiled a few ideas and tips for having a kaunastic time. Without further ado… Happy Easter!

The Easter week is a great time to explore the Catholic traditions in Lithuania. On Saturday, churches will host the traditional Easter Vigil. Historically, it is during this service that people are baptised and that adult catechumens are received into full communion with the Church. It is held in the hours of darkness between sunset on Holy Saturday and sunrise on Easter Day.

On Sunday, you have plenty of choices to join the traditional 8 am (ish) mass in many churches in Kaunas. Maybe the closest to your hotel will do? We’re sure the receptionist will advise the most interesting or cosiest one and will check the mass time for you. Some churches, including the St. Peter and St. Paul Cathedral Basilica, will also host processions. Come before 8 am as it will be crowded!

If you’re in Lithuania during the Easter week, too, we suggest you visit the Open-Air Museum of Lithuania in Rumšiškės. The folk museum offers an exhibition of traditional Easter tables set in authentic wooden houses representing the traditional ethnographic regions of Lithuania. An Easter celebration will be held in the museum on Monday, April 22, starting midday. 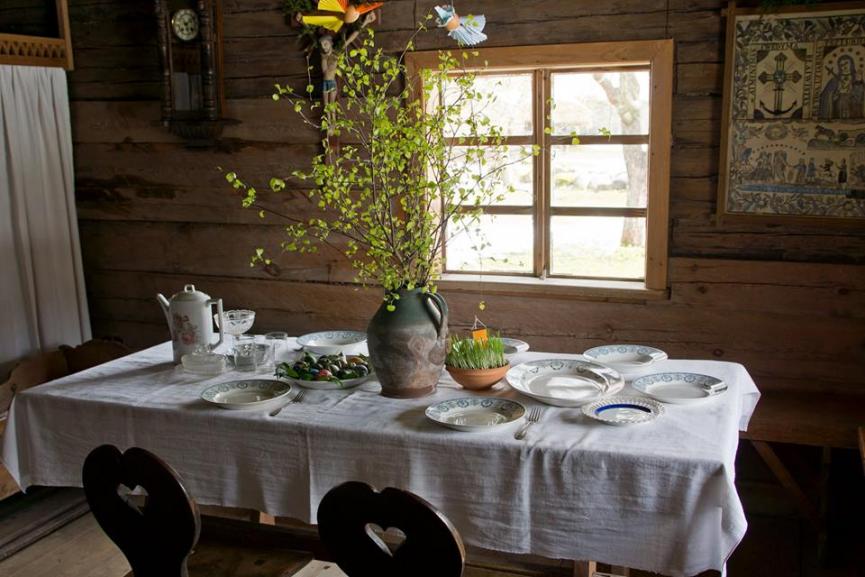 Museums in the city of Kaunas will be closed on both Easter Sunday and Easter Monday. The good news is that the Lithuanian Zoo will be open on both days!

There’s no set rule for the working hours of restaurants and cafes in Kaunas during public holidays. As we have published a Kaunastic gastro guide which you have a high chance of picking up when in Kaunas, here's some current information. As of this year, Uoksas, snobas, Sala, Numan, Agave, Momo Grill and Monte Pacis will remain closed on both Easter Sunday and Easter Monday. DIA, Višta puode, Jurgis ir Drakonas and BO will be closed on Easter Sunday.

Of course, you won’t remain hungry on Easter Sunday. Miesto sodas, Etno dvaras, Avilys and L’Artisan at Daugirdas Hotel will start serving food at midday. A couple of hours later, Bernelių užeiga, Talutti and Republic will open their doors, too. Check out Senis ir Jūra if you’d like some seafood for your Easter dinner or lunch! Most gastronomic spots not mentioned above will be open as usual on Easter Monday.

P.S. The Lithuanian tradition is to eat as many hard-boiled eggs as you can (before eating, you should pick the strongest egg around the table and eat the ones who lost!), accompanied with some horseradish, butter and mayo. We’re not sure your dietician would agree on this, but, hey, this is how we roll! Speaking of rolling, we roll our traditionally decorated and dyed eggs a week after Easter. The farthest one wins. 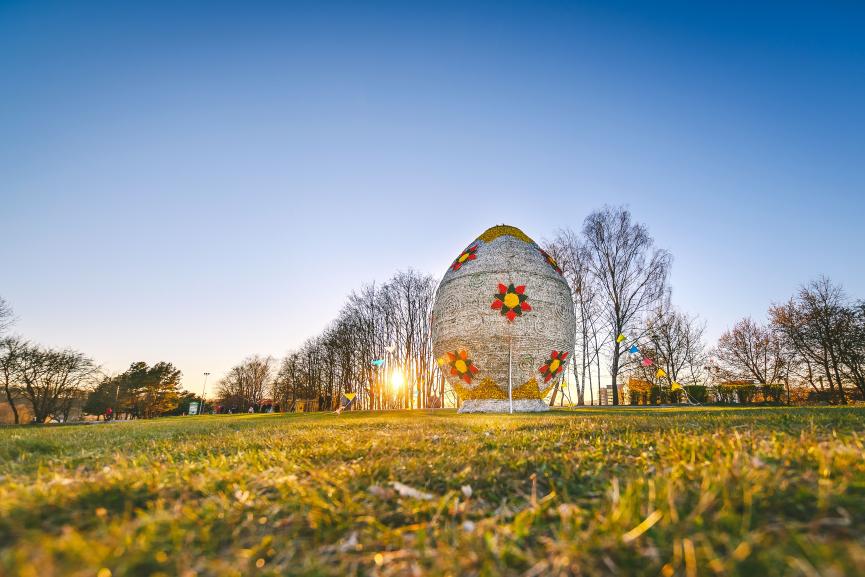 This one's too big for rolling games... A new tradition is Kaunas is placing these giant eggs in new locations each year. In 2019, you can find it in Santakos (Confluence) park. Picture by A. Aleksandravičius

There are a few exciting concerts scheduled for Easter week. You can still catch the events of the inaugural Resurrection Festival taking place since April 14. The organisers of the festival aim to create a memorable Easter event for the residents and guests of Kaunas. The programme of the festival includes Christian music concerts, poetry readings, a pop-up cinema of Christian films etc. The closing event is scheduled for Easter Monday. Gabrielė Gvazdikaitė and the Resurrection Orchestra will perform in the amphitheatre of Žalgirio arena. Tickets.

Fans of heavier sound should check out Lemmy club on Friday, April 19. First in the lineup is Manzana, a Tampere-based alpha-female-fronted pop-metal band that has been going on for 15 years now. They’re coming to Kaunas with a Finnish alt-rock band Dorothy Polonium. The Factor, a rock band from Latvia, will join them on the way. Facebook event.

On Saturday, April 20, Golden Parazyth will perform in the amphitheatre of Žalgirio arena. Saturday, 04 20, 8 pm. Indie electronica, electronic pop, fantasy rock – you name it. Golden Parazyth was once a solo artist, then a duo, and now they’re back in Kaunas with pockets full of new music and an 8-piece band. Tickets.

Also on Saturday, the Kaunas Jazz festival favourites Saulės Kliošas are coming for a warm-up night before the festival that will start later this month. Go see the Lithuanian band in PuntoJazz attic if you’re as funky as you’re groovy. Facebook event (in Lithuanian).

Lovers of electronic dance music will be pampered on the night between Easter Sunday and Easter Monday. Club Lizdas is hosting its traditional off-site event called Prisukamas Abrikosas (Clockwork Apricot) – check the Facebook event for coordinates of secret location and lineup. Tickets.

Also, Finnebassen, a Norwegian DJ and producer of house music, will deliver a set in a place formerly known as G-Loft – right at the Town Hall Square! Tickets.

In Kaunas later this April? See you in the concerts of Kaunas Jazz festival.