Now into its centennial season, the National Kaunas Drama Theatre has announced its Autumn calendar – with some of the performances surtitled in English. German, too! 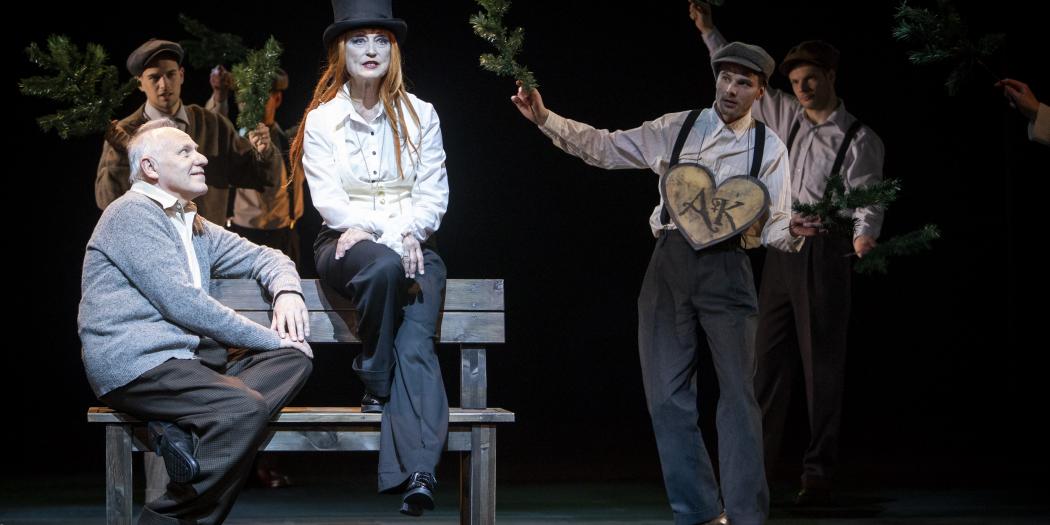 We’re thrilled to be able to invite non-Lithuanian speakers to experience the magic of Lithuanian theatre. Now into its centennial season, the National Kaunas Drama Theatre has announced its Autumn calendar – with some of the performances surtitled in English. German, too! We suggest you select seats not closer than row 10 to be able to conveniently read the surtitles.

On September 12, English-speakers are welcome to watch “The Visit”. The two-act play by Friedrich Dürrenmatt, directed by Aidas Giniotis, is situated in a small, impoverished town of the province, where the factories have been out of service for a long time, and there are no trains carrying important passengers, is visited by the fabulously rich lady Clara. This town is a place where she grew up, but one day left and returned after more than four decades. The multimillionaire Clara, who can financially support the townspeople, is the last hope to restore the town’s prosperity. The old lady agrees to donate one billion francs, but with one condition – justice must be restored in the town by killing one man who broke her heart when she was young.

“The Visit”. Photo by Donatas Stankevičius

The award-winning Gotthold Ephraim Lessing’s “Nathan the Wise”, directed by Gintaras Varnas, will be surtitled in German on September 20. The performance is part of the German language days in Lithuania.

Published in 1779, the play is a fervent plea for religious tolerance. Its performance was forbidden by the church during Lessing’s lifetime, and it was first performed in 1783 at the Döbbelinsches Theater in Berlin. The utopian tale of the Age of Enlightenment exalts the human mind and the power to make the world perfect and tries to convince us that three sons – three religions – can live in peace and harmony. Vytautas Anužis was awarded the Golden Cross, the highest award in Lithuanian theatre, for portraying Nathan. 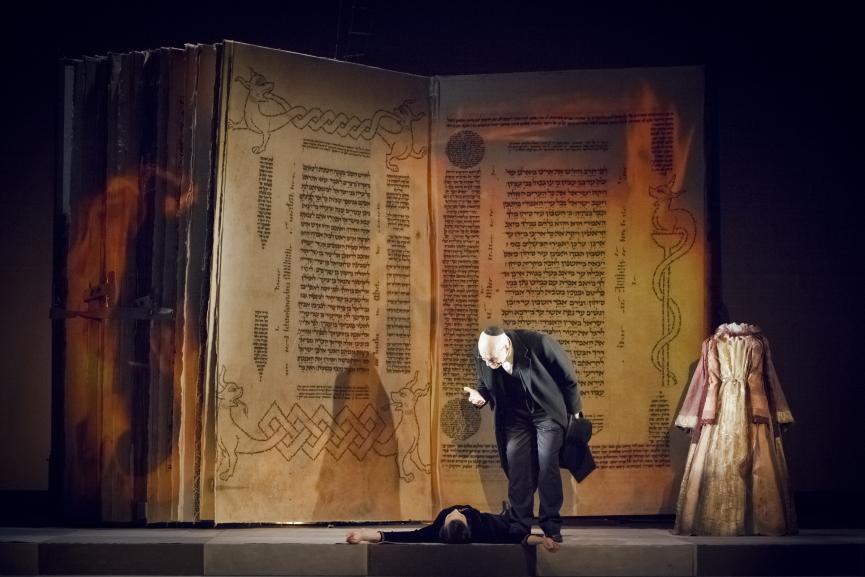 On October 12, Max Frisch’s “Biography: A Play Acting”, directed by Gintaras Varnas, will be surtitled in English. This is a play in which the inevitability of destiny, variations of personal choices and a utopic desire to change a biography of an individual life are analysed. The surrealistic opportunity to realise life as a play on the stage and to change unpleasant or failed situations – what would happen if the Butterfly effect was real? This play features absurd elements that exist in plays of F. Kafka’s The Trial where personal choices become an illusion because Destiny, God, Recorder always stands behind your back and cynically evaluates the life of a person as one more case in the Universe. A person who knows his destiny for 7 years ahead still makes particular mistakes, so the critical Human error is inevitable. 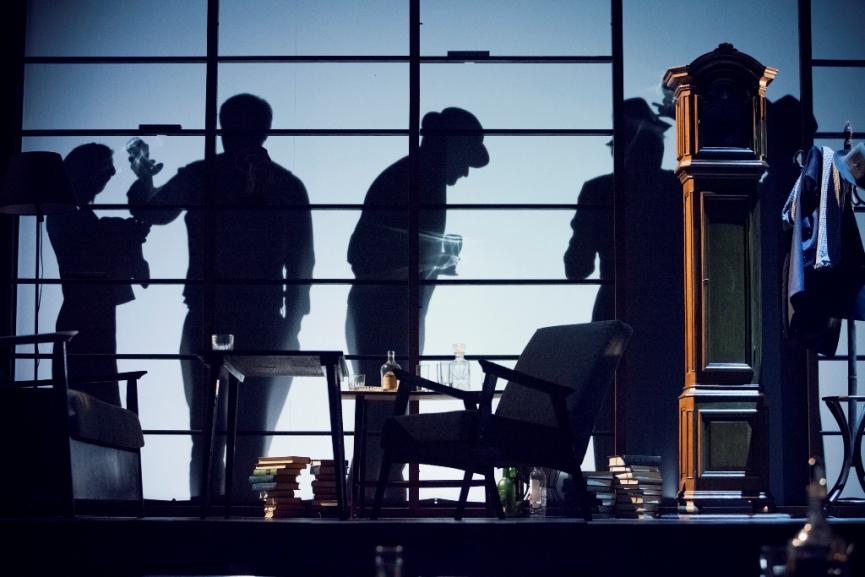 “Biography: A Play Acting”. Photo by the theatre

“Ghetto”, a performance directed by Gintaras Varnas and based on a play by Joshua Sobol, was the highlight of the theatre’s 99th season. You’re able to catch it surtitled in English on October 24. The play focuses on the experiences of the Jews of the Vilna Ghetto during Nazi occupation in World War II, as well as the story of the Jewish theatre inside the ghetto. The theatre became the source of strength and resistance. It’s a story about a collective fight for survival, both physical and spiritual. Varnas added a lot of documentary material to the work of Sobol. 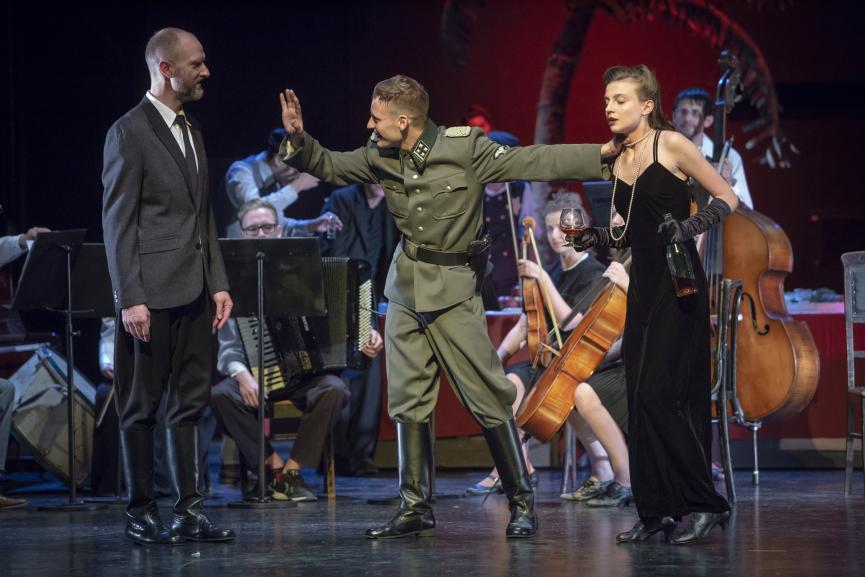 This season, Varnas came back to the main stage of the National Kaunas Drama Theatre with “Sombras” (Shadows), a two-act performance based on the works of Federico García Lorca and Luigi Pirandello. On November 13, it will be surtitled in English.

“Sombras” is a reflection on the meaning of theatre and its value. It encourages a discussion about theatre art and the artist that is seeking an unattainable truth. This dramaturgic collage is an intellectual journey into the theatre world, where magic and everyday life, reality and mysticism, real world and illusion, lies and truth, life and death intertwine. 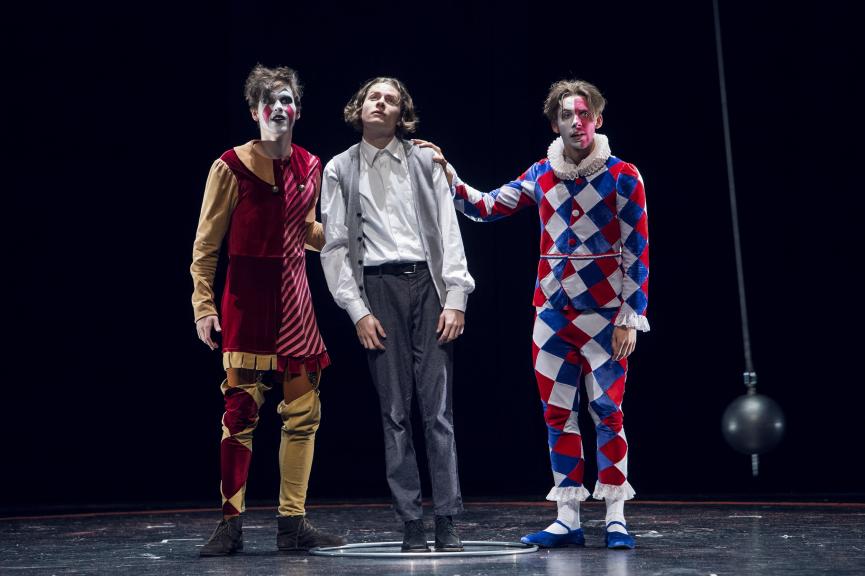 A contemporary take on Shakespeare’s “Hamlet”, directed by Vidas Bareikis, will be surtitled in English on November 17. Hamlet’s personality in this particular performance is neither that of a romantic hero nor of an idealist. He is just a man looking for the truth. His feelings are real ranging from love and hectic revenge to mourning, rage and desperation. All the emotions create a real human being with all possible colours and shades. Perhaps that is the reason which makes the play so relevant after hundreds of years. 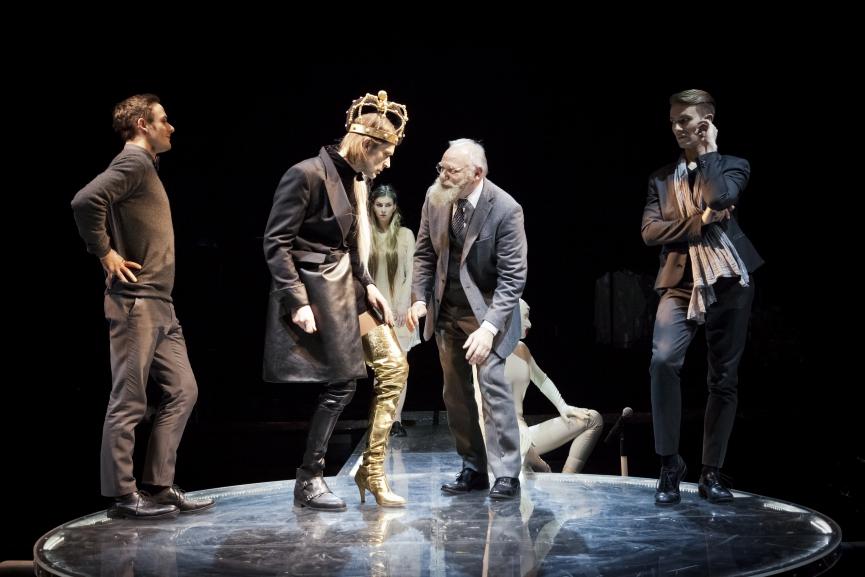 On November 24, the dramatisation of the Lithuanian classics “The White Shroud” by exodus writer Antanas Škėma (1910-1961) will be surtitled in English. Directed by Jonas Jurašas, the performance invites you to meet Antanas Garšva, who’s wandering through his cracky memories in places of the interwar Kaunas, High Panemunė and Vilnius. Garšva, having no opportunity to vow to his creative work and achieve immortality of his soul, is forced to carry out a Sisyphean-like lift operator's work in the biggest hotel in New York. His fragmented consciousness is haunted by homesickness, and sometimes images of women whom he loved. Garšva rejects love, ruptures human relationships, remains lonely in the cage of an elevator, but he still lives in the desire of hope fruition. 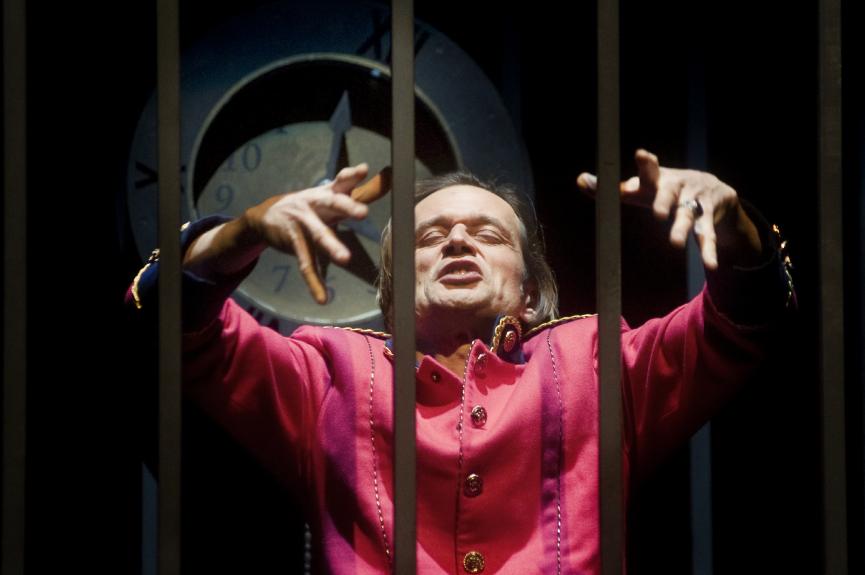